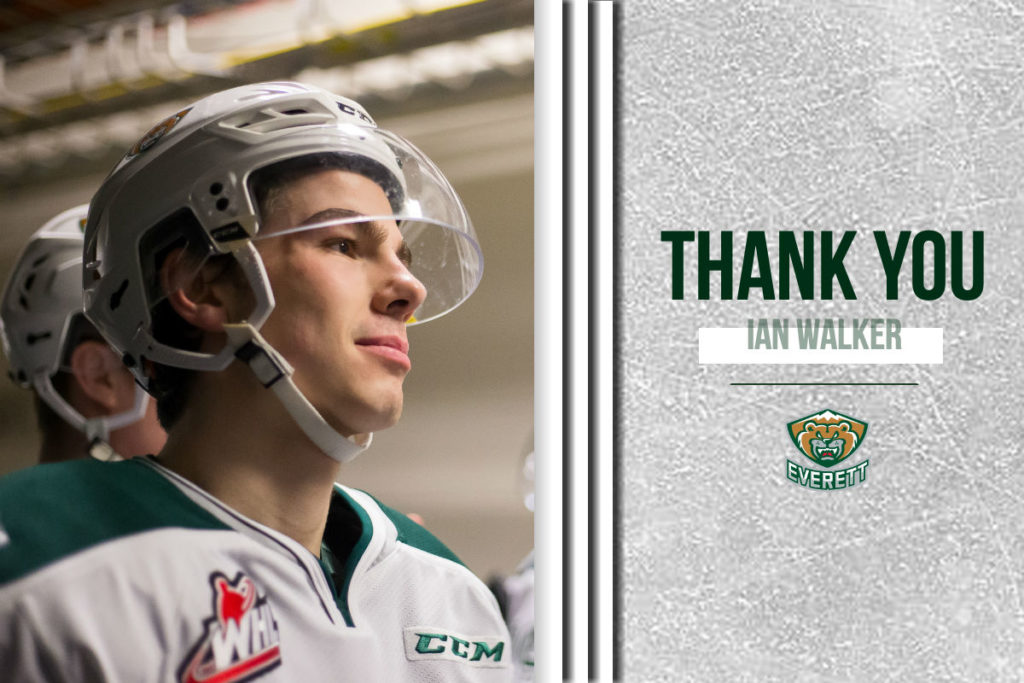 Walker will pursue Engineering degree at UBC, supported by 3 years of the WHL scholarship program

EVERETT, Wash. – Ian Walker, a three-year defenseman for the Everett Silvertips (@WHLSilvertips), officially announced his retirement from the game today, electing to pursue a career in engineering and his degree from the University of British Columbia.

Walker, 19, will attend classes at UBC starting this fall, enrolling in an Engineering major. While attending UBC, he will receive three years of WHL Scholarship benefits, including tuition, fees, and textbooks for every season played in the Western Hockey League.

The native of Vancouver, British Columbia competed in172 career WHL games, all with the Silvertips with 23 points (2g-21a), 30 penalty minutes and a +17 rating while helping guide the Tips to three straight U.S. Division titles and the Western Conference championship in 2017-18. Walker skated in a career-high 67 games in 2017-18 with a +7 rating, and didn’t miss a playoff game in the Tips run to the WHL Championship Series with a goal and four assists in 22 postseason games.

Walker’s announcement: “I’d like to thank all the fans for welcoming me to the city and treating me with the utmost respect over my three seasons in Everett. It truly felt like a second home for me. I’m forever grateful to the coaching staff for making me not only a better player but a better person. As I reflect on my hockey career I will always remember the boys. Nobody supported me more than my teammates. Through all the ups and downs they were always there for me. I’ll forever bleed green. Thank you for all the memories.”

Silvertips general manager Garry Davidson said: “Ian Walker competed for three seasons on our blue line with dignity, class, and a positive attitude that made a big impact with our team on and off the ice. We respect his decision to pursue a new opportunity in life and we’re proud to support it with funds made possible by the WHL scholarship program. His role on our 2017-18 team that captured the Western Conference championship will always remain a part of Silvertips lore, and he will always be a part of our family.”

ABOUT THE WHL SCHOLARSHIP PROGRAM

Administered by the WHL Office, WHL Scholarships are solely funded by the member Clubs of the WHL. In 2018-19, a record 405 graduate players accessed their WHL Scholarship and since 1993, the league has awarded over 6,000 scholarships to graduate players representing in an investment of over $25 million by WHL club ownership. Every player who plays in the WHL is eligible to receive the WHL Scholarship.  For every season a player plays in the WHL, they receive a guaranteed, full-year WHL Scholarship including tuition, textbooks and compulsory fees to a post-secondary institution of their choice. The WHL Scholarship is a fully-guaranteed academic scholarship with no requirement to play university hockey to qualify, and the student-athlete can apply the funding to any post-secondary or career-enhancing program of his choice, including trade schools and professional career training programs.