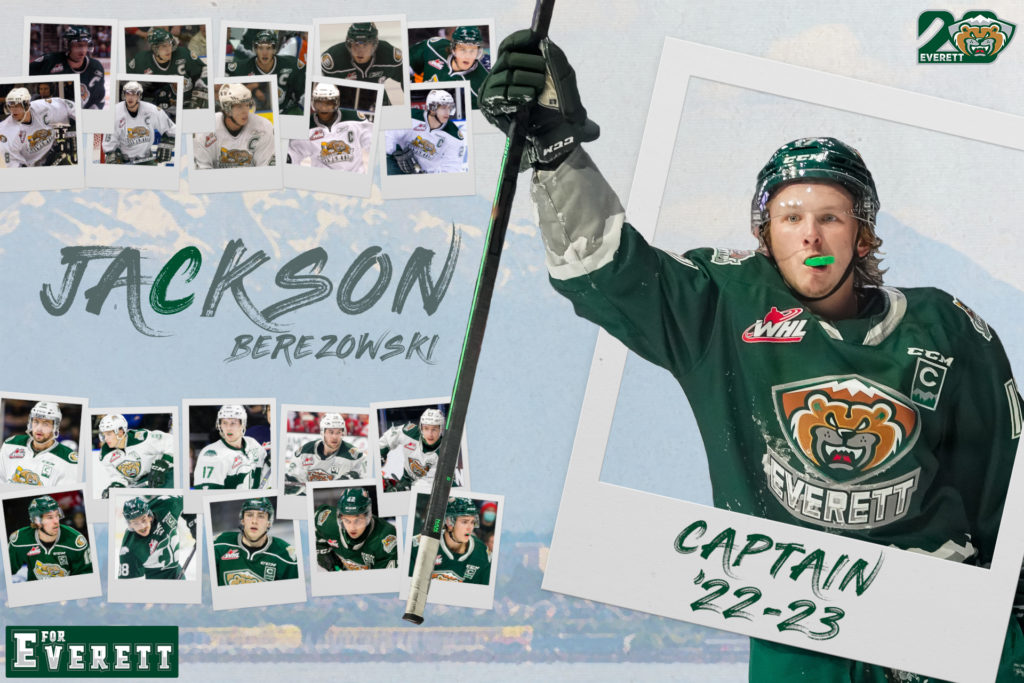 EVERETT, Wash. – The Everett Silvertips are proud to announce forward Jackson Berezowski as team captain for the 2022-23 season.

“Obviously it’s a really cool honor and a privilege,” Berezowski said. “Me and [Ronan Seeley] got our feet wet last year co-captaining this great organization. First thing when you walk in [the locker room] you see the captains on the wall there. It’s a pretty special feeling to be one of those guys.”

“Through and through, he’s a Silvertip,” praised general manager/head coach Dennis Williams. “We couldn’t be happier and more proud of him to take this step and lead our group. He’s an extension of our coaching staff, and a player that not only gets players ready for the game but is a great role model off the ice as well. He’s a pro, and we couldn’t be more excited for him to finish his career here and have a chance to play pro hockey after.”

The announcement of Berezowski’s captaincy came following Friday morning’s practice with a surprise video message from former Silvertips captain and current Minnesota Wild forward Connor Dewar, a friend and teammate of Berezowski’s. Dewar played for Everett from 2015-19, serving as captain in his final season with Berezowski a then-rookie. 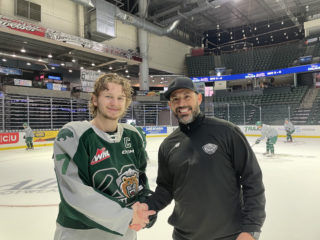 In his video message, Dewar praised Berezowski for his attention to detail, his passion and his will to win- noticeable even at a young age. “You’re in good hands with him,” he noted.

“We like to keep in touch once in a while,” Berezowski smiled. “Obviously he was a guy I looked up to. I came here [to Everett] at 15, young, didn’t know what to do, didn’t know how to tackle the world. But he was one of those guys I counted on every day. He did the right things.”

“He’s learned from some great leaders over the past few years,” Williams added. “The best thing about Jackson is he’s going to be him. That’s what makes him a great leader and a great person. There’s no doubt his character’s high, his compete level’s high, his tenacity…he brings a whole other level when he’s on the ice.”

Playing in his first full Western Hockey League season in 2018-19, Berezowski ranks as the longest tenured Silvertip on the active roster. He quickly became a vocal presence in the locker room, serving as alternate captain in his third season, the COVID-shortened 2021 campaign.

Berezowski’s talent and poise on and off the ice helped the Silvertips on their way to one of their most successful regular seasons in team history in 2021-22. Everett set several franchise records, including longest winning streak to start a season (6), longest point streak (18 games) and most goals scored as a team in a single season (280). The Silvertips also earned their third 100-point season, their ninth U.S. Division title, their fifth Conference #1 seed and 22 CHL Top-10 appearances.

Individually, Berezowski tallied 46 goals in 62 games played, third most of all WHL skaters and one shy of tying the Silvertips’ single-season record. He also collected 33 assists for 79 points on the year, giving him 151 in 211 career games. Despite his punishing physical play and propensity for getting to the dirty areas of the ice, Berezowski racked up only 23 penalty minutes on the year, earning him the U.S. Division Most Sportsmanlike Player honor at the 2021-22 WHL Awards. He was also named a first-team All-Star in the U.S. Division in 2021-22.

Berezowski ranks as one of the most prolific players in franchise history even before his over-ager campaign begins. He currently ranks eighth all-time in goals scored with 82, needing 30 to pull even with franchise-leader Patrick Bajkov (112 in 342 career games). He is 16th in total points with 151, needing just 23 to move into the top-10 all-time. He also ranks 21st games played, with an opportunity to catapult as high as 10th with 68 games ahead. Berezowski has proven to be one of the most durable players on the Silvertips, missing just 16 total regular season games in four seasons.

Debuting on Sep. 21, 2018, it didn’t take long for Berezowski to establish himself as a scorer in the Western Hockey League. He netted his first career goal on Sep. 23 in a home matchup against the Portland Winterhawks, eventually finishing with 11 in his rookie campaign. He improved to 18 goals the following season with 18 assists in 61 games played. In the COVID-shortened 2021 season, Berezowski was nearly a point-per-game player, recording seven goals and 14 assists in 23 games played.