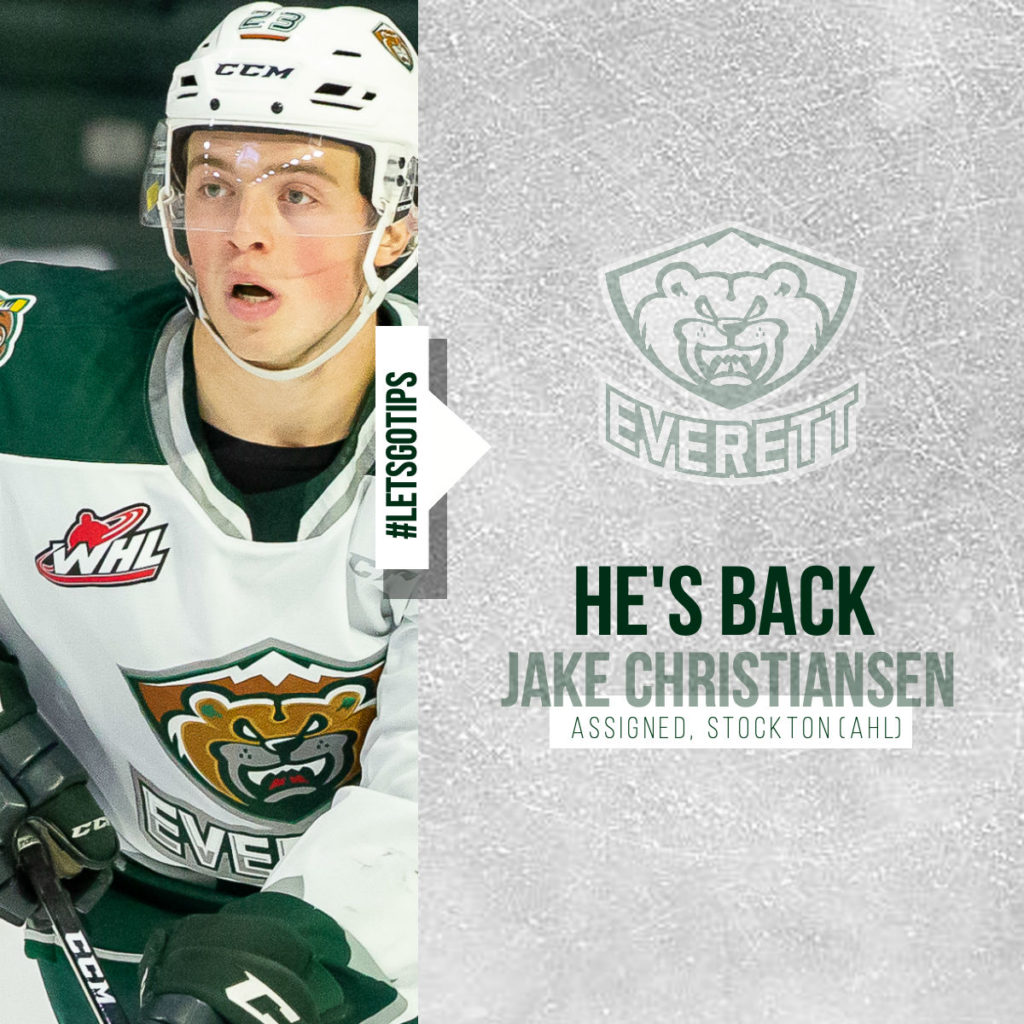 EVERETT, Wash. – The Everett Silvertips (@WHLSilvertips), seven-time U.S. Division champion and two-time Western Conference champion of the Western Hockey League, announced today that defenseman Jake Christiansen has been returned to the club after being released from his professional tryout offer with the Stockton Heat, the American Hockey League affiliate of the Calgary Flames.

Christiansen, 20, will join the Silvertips by Friday, in the middle of a five-game road swing. The Tips continue their road trip on Friday at 5:05 p.m. PT (KRKO / Tips App) against the host Swift Current Broncos at Credit Union iPlex and return home for Teddy Bear Toss presented by Ace Hardware on Saturday, Dec. 14 against the Vancouver Giants, 7:05 p.m. in downtown Everett. Tickets are on sale with a large crowd expected, available at the link below. The game will also host the next Chick-fil-A Fan 4 Pack, offering 4 tickets and 4 sandwiches for as low as $56.

The 6-foot-1, 195-pound defenseman made his professional and AHL debut with Stockton on Oct. 19 against the Bakersfield Condors and has suited up in nine AHL games, recording five shots on net.

He has suited up in 259 career WHL games, all in a Silvertips jersey, logging 102 points, a +55 rating and 79 penalty minutes. He was back-to-back co-recipient of the Silvertips Iron Man Award from 2016-18 and is the Tips all-time leader in plus-minus (+55). His 259 games played rank fifth all time among Silvertip defensemen, needing eight games to surpass Cole MacDonald for fourth, all-time.

Christiansen participated in rookie camp with the Calgary Flames (NHL) before the 2018-19 season and originally left the Silvertips this year on Sept. 6 to skate in St. Louis Blues development camp, shortly before signing a PTO agreement with Stockton.

The Tips ticket packages are on sale now, available at www.everettsilvertips.com/season or by calling (425) 252-5100 during normal business hours. Seven game packs are on sale, offering a bonus eighth game for free.