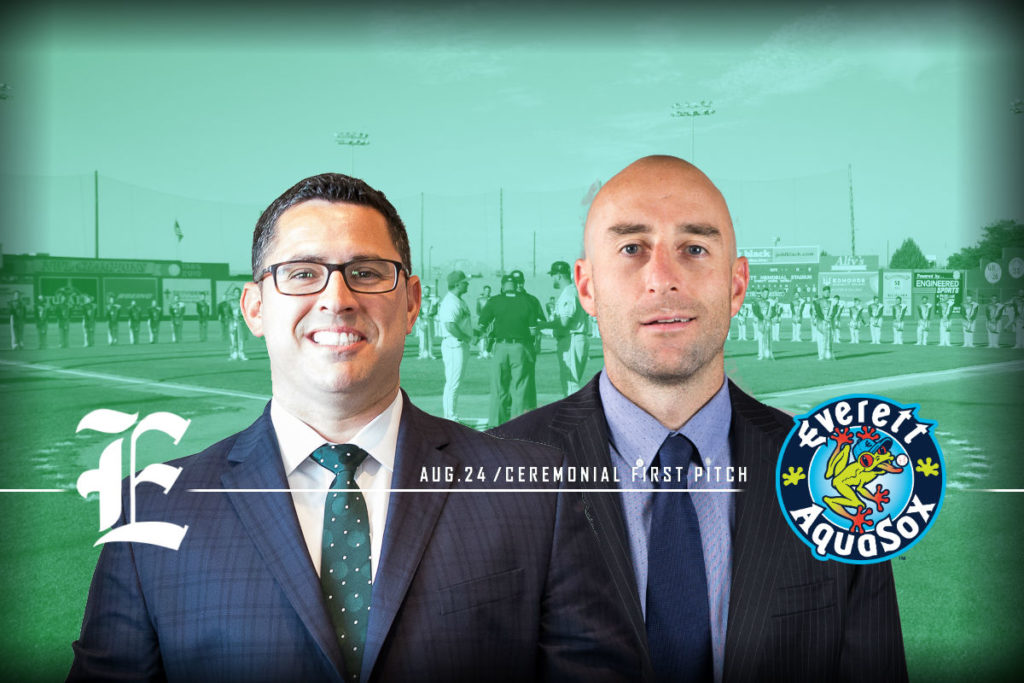 EVERETT, Wash. – Everett Silvertips (@WHLSilvertips) head coach Dennis Williams and assistant coach Mitch Love are scheduled to be hosted by the Everett AquaSox, affiliate of the Seattle Mariners and participate in the ceremonial first pitch at Everett Memorial Stadium on Thursday, Aug. 24 for the 7:05 p.m. game between the AquaSox and Vancouver Canadians.

Fans interested in meeting Williams and Love can join the coaching duo along the concourse of Everett Memorial Stadium immediately after the ceremonial first pitch for autographs and photos, lasting until the end of the second inning.

Williams was named the fifth head coach in Silvertips history on May 15, entering his 12th year of head coaching experience across junior and college level and carrying a lifetime win percentage of .673 over the last seven seasons as head coach with Bloomington of the United States Hockey League and Amarillo of the North American Hockey League. After guiding Bloomington to a 29-24-7 record and fifth place in the Eastern Conference in their expansion season of 2014-15, he led the Thunder in 2015-16 to a 36-18-6 record, an appearance in the Eastern Conference Final, and a victory shy of reaching the league’s Clark Cup Finals.

The 38-year old led Amarillo to three consecutive 40-win seasons from 2011-14, amassing a career record of 168-44-2-24 and a points percentage of .756 across four years in the NAHL. He delivered three straight South Division titles, back-to-back and league leading 46-win campaigns, and a Robertson Cup title to Amarillo in 2012-13. Under Williams, the Bulls shattered a 35-year old record with 99 points in back to back seasons (2011-13) and he was named NAHL Coach of the Year after the Bulls’ league championship.

Love, 33, returns for his ninth season in the organization as assistant coach and assistant to the general manager, whose defensemen helped the Silvertips lead the WHL in fewest goals allowed per game in back to back seasons, while ranking fifth or lower in the last four consecutive seasons. Every defenseman who suited up for the Silvertips last season combined for a +49 rating, while four defensemen were +15 or higher. He has served behind the bench for Hockey Canada for a pair of seasons (2015-17) at the World Under-17 Hockey Challenge, where he helped capture a gold medal in his national coaching debut, in 2015-16. He also served on the coaching staff for Hockey Canada again at the program’s U-18 Selection Camp in Calgary, working with 44 players competing for a roster spot in the 2017 Ivan Hlinka Memorial Cup.

The Quesnel, British Columbia native was a member of the Silvertips inaugural squad in 2003-04 which won the U.S. Division and Western Conference championships. He served as the second captain in club history the following season and was signed by the Colorado Avalanche as a free agent on Oct. 11, 2005. Love suited up in 325 career games in the pro ranks over the course of six seasons, all but one in the AHL. He skated in 320 career WHL games with the Silvertips, Moose Jaw Warriors and Swift Current Broncos, earning 99 points and 901 penalty minutes.