goaltender of the week Koen MacInnes whl
by
Casey Bryant 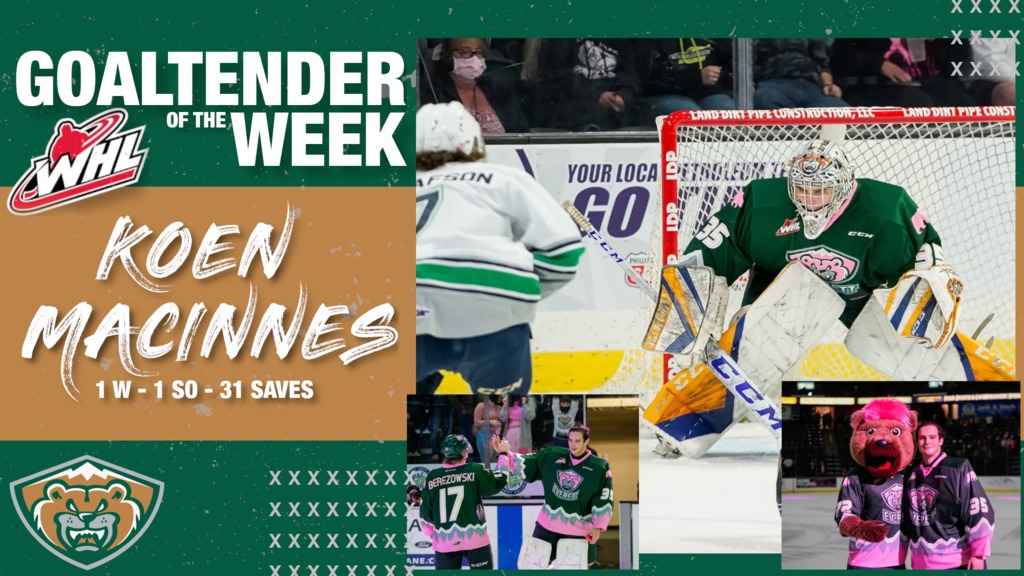 EVERETT, Wash. — Everett Silvertips goaltender Koen MacInnes has officially been named Goaltender of the Week by the Western Hockey League for the week ending Oct. 17th.

MacInnes, in his third full WHL season, backstopped the Silvertips to a 3-0 victory over the Seattle Thunderbirds on Saturday, turning aside 31 shots on goal for his fourth career shutout.

“I thought he was really solid,” noted head coach Dennis Williams. “He was very calm, collected, [he] gave us a chance to win. He was very strong at the start of the game for us, we had to weather the storm there in the first ten, twelve minutes. And then late in the third, when they were six-on-four for that last kill, I thought he was really good and strong in net.”

The Thunderbirds peppered MacInnes with 11 shots on goal in the opening 10 minutes of Saturday’s contest in Everett before Jackson Berezowski opened the scoring and allowed the Silvertips some breathing room. MacInnes kept Seattle at bay for the remainder of the game, even withstanding two Thunderbirds powerplays in the final seven minutes of action. The latter powerplay was played mostly at 6-on-4 with the Seattle net empty. MacInnes made 11 saves in the final frame.

“It feels pretty awesome, there’s not really many other words you can use to describe it with,” MacInnes said of his performance after Saturday’s game. “I don’t think it adds anything to it that it’s a shutout. You’re just trying to stop the next shot and just get the win. That’s really all that matters.”

Koen MacInnes was acquired via trade in August from the Saskatoon Blades. The 6’2″ Burnaby, B.C. native was originally a 2nd-round WHL Draft pick who made his debut in the 2019 WHL Playoffs for the Blades. He posted a 14-5-1 record in his first full regular season in 2019-20 with a 2.84 goals-against average and .901 save percentage. The following year, he notched four wins with a 2.57 GAA and .912 save percentage in seven appearances.

Since arriving in Everett, MacInnes has won both starts and allowed just three goals on 48 shots in the process. Saturday’s shutout was the fourth of his WHL career.