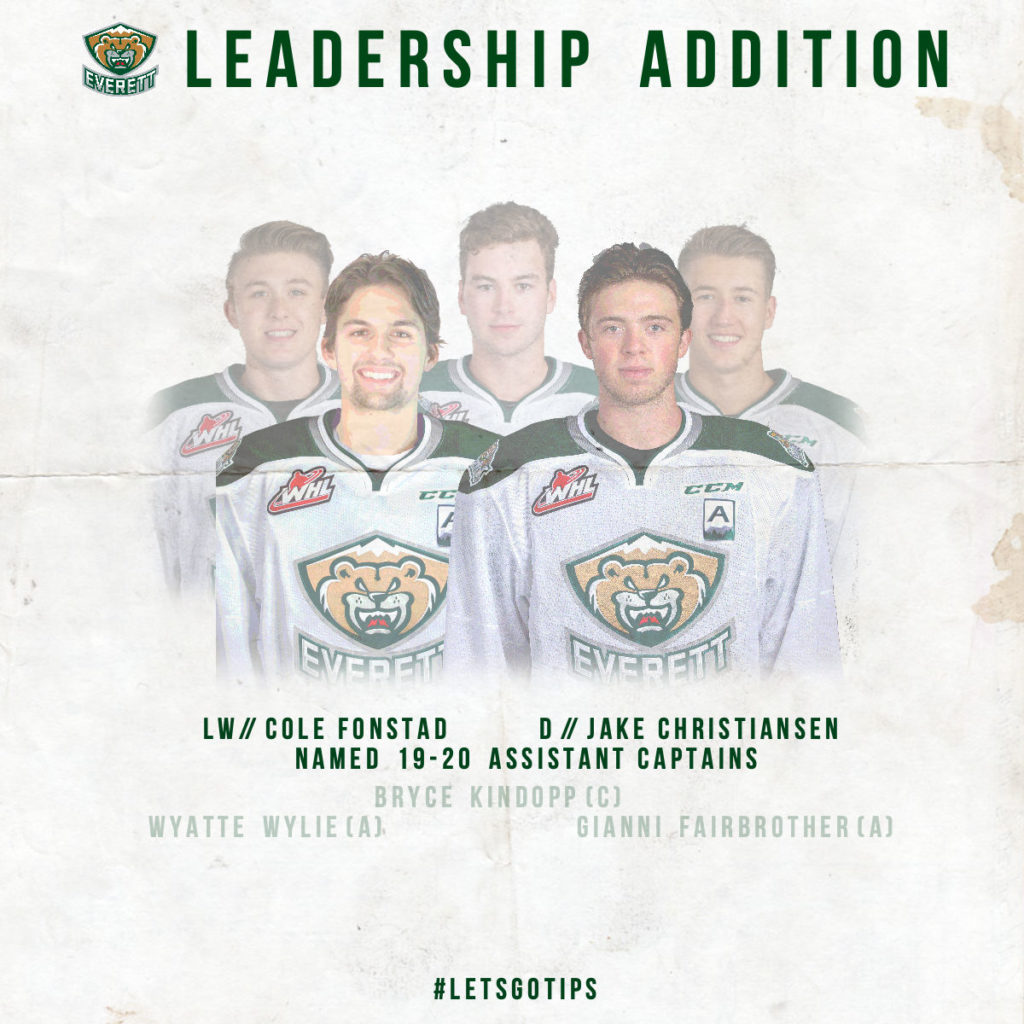 EVERETT, Wash. – The Everett Silvertips, seven time champions of the U.S. Division and two-time Western Conference champions of the Western Hockey League, announced today that defenseman Jake Christiansen and forward Cole Fonstad have been named assistant captains for the club, for the 2019-20 season effective immediately.

“Jake Christiansen has served as an invaluable member of our program for his entire career,” said Silvertips head coach Dennis Williams. “As a returning assistant captain from last year’s team, Jake understands our core values and expectations both on and off the ice. His every day approach and preparation serves as a great role model among our group. We are excited to have Jake back in an Everett jersey and look forward to him assisting in leading our team moving forward.”

“Cole Fonstad is a proven winner and difference maker in our league, and has completely bought into the fundamentals of our program,” said Williams. “Winning the Ed Chynoweth Cup last season, Cole gained valuable experience on what it takes to win in the league. His preparation and lead-by-example leadership style will have a positive impact throughout our team.”

Christiansen, 20, serves as a Silvertips assistant captain for his second straight season after returning Dec. 9 from a professional tryout offer with the Stockton Heat of the American Hockey League, originally signed on Sept. 6. Through 11 games, he is already tied for ninth in the league in goals among defensemen (7) and has amassed 17 points (7g-10a), along with three power play goals and one game winning goal. He set career highs in goals (12), assists (32), and points (44) in 67 games last season with the Silvertips, en route to the club’s third straight U.S. Division title and his development camp invite with the St. Louis Blues.

A two-time co-recipient of the Silvertips Iron Man award, the native of West Vancouver, British Columbia leads Silvertips active players in games played (270), tied with Connor Dewar for 11th on the Tips franchise list, while collecting 119 points, 35 goals, 84 assists, and a +61 rating (currently, the Tips all-time leader) in his career. He has helped the Tips earn three U.S. Division titles and was a part of the 2017-18 squad that captured the Western Conference title.

Fonstad, 19, is a fifth round selection of the Montreal Canadiens in the 2018 National Hockey League Entry Draft and has 36 points (5g-31a) in 24 games since joining the Silvertips this season, acquired Oct. 13 from the Prince Albert Raiders in exchange for center Reece Vitelli, a second round and fourth selection in the 2021 WHL Draft, and a conditional third round selection in the 2022 draft. His 38 assists in 33 games this season, with both the Silvertips and Raiders leads the entire WHL, and he is tenth in league scoring with 45 points (7g-38a).

The native of Estevan, Saskatchewan helped guide Prince Albert to a WHL championship and berth in the Memorial Cup tournament last season, ranking third on the program with 73 points (29g-44a), third in assists (44), second in power play assists (14), and fourth in power play points (19) in 67 games. His 73 points matched his career high previously set in 2017-18 with the Raiders when he also led the club with 52 assists, appearing in all 72 games.

En route to the WHL title, the 5-foot-10, 170-pound left winger earned six points (2g-4a) in 21 postseason games last season, had a goal and an assist in the WHL Championship Series against Vancouver, and earned a goal and a pair of assists in three Memorial Cup games. He has 11 points (6g-5a) in 28 career WHL Playoff games and earned an invite by Team Canada to the 2019 World Junior Summer Showcase, a step in the roster selection process for upcoming IIHF World Junior Championship.

Fonstad has 218 points and a +43 rating in 243 WHL games with both the Silvertips and Raiders.

UP NEXT: The Tips six-game trip continues tomorrow against the host Prince George Cougars at CN Centre, opening at 7:05 p.m. (KRKO / Tips App / WHL Live) and return home Sunday, Jan. 12 against the Regina Pats at 4:05 p.m. Tickets are on sale for the Jan. 12 home game, the next Siegen Family Fun Zone event. The first several hundred fans in attendance will take away a Tips beanie presented by BECU.