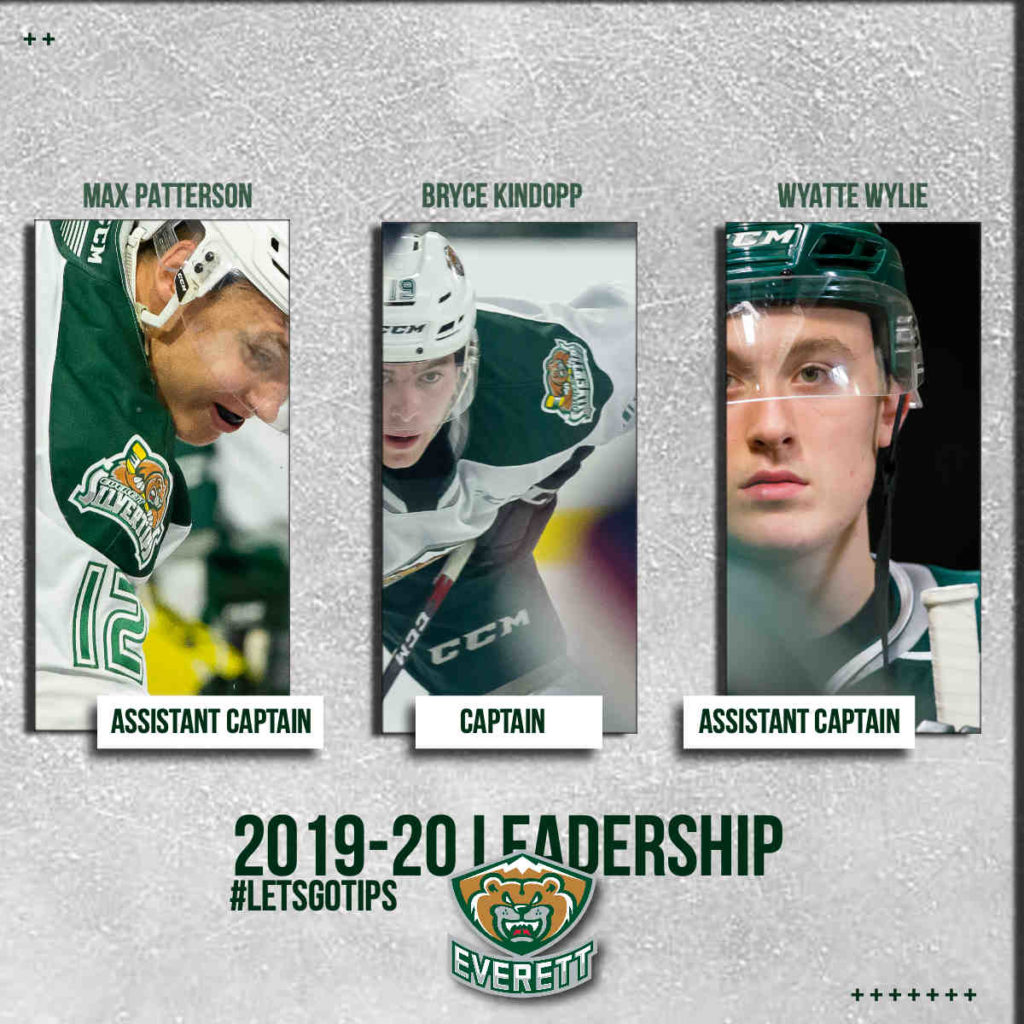 “Max Patterson and Wyatte Wylie are extremely qualified individuals to supplement our leadership as assistant captains for the 2019-20 season,” said Silvertips head coach Dennis Williams. “Bryce Kindopp’s appointment as captain reinforces the necessary foundation we need to succeed as a group, by playing with a relentless approach and committing to excellence off the ice. Wyatte and Max are dedicated to reaching those goals every day – Wyatte’s experience as an assistant captain last year was an integral part of our leadership, and Max performed as a leader for us last year, down the stretch and in the playoffs. We’re proud to have a group in place with experience in championship moments and the ability to maintain accountability, cohesiveness, and our culture. We look forward to everyone’s contribution.”

The trio of Silvertips – Kindopp, Patterson, and Wylie – have combined for 675 career WHL regular season games and 121 career WHL Playoff games, all skating in the 2018 WHL Championship Series.

Patterson, who turns 20 on Dec. 27, last season notched career-highs in goals (14), assists (25) and points (39) in 63 games with the Silvertips and Swift Current Broncos, added with eight points (2g-6a) in ten WHL Playoff games. The 6-foot-6, 226-pound right winger helped guide the Broncos to the WHL title in 2017-18 and had five goals and seven points in 26 WHL Playoff games, added to three games he suited up for in the Memorial Cup.

The Kamloops, British Columbia native has 88 points (38g-50a) in 262 career WHL games with the Silvertips, Swift Current, and Kootenay, added to 15 points (7g-8a) in 36 career WHL postseason games. Patterson was originally acquired by the Silvertips from Swift Current on Dec. 3, 2018 in exchange for the rights to forward Dawson Springer and a fourth round selection in the 2020 WHL Draft.

Wylie, who turns 20 on Nov. 2 and was re-assigned to the Silvertips yesterday from the Philadelphia Flyers (NHL), last season hit career highs and led Silvertips defensemen in points (47), assists (36), plus-minus (+33), and tied the Silvertips lead for power play assists (18) while suiting up in 67 games as a co-recipient of the Silvertips Iron Man award. He earned career-highs in power play goals (4), and game winning goals (2) last season, helping the Tips capture their third straight U.S. Division title.

Scheduled to enter his fourth season in a Silvertips jersey, he was originally selected by the Flyers in the fifth round (127th overall) of the 2018 NHL Entry Draft.

Kindopp, 20, returned from training camp with the Colorado Avalanche (NHL) last Thursday and was appointed the 17th captain in Silvertips history. Last season, Kindopp led the Silvertips last season with 39 goals while setting additional career highs in assists (34) and points (73) in 67 games, named recipient of the team’s Unsung Hero award and co-recipient of the Silvertips Iron Man award. In 203 games during his WHL career, all in Everett, he has logged 123 points and 70 goals along with 21 power play goals. He ranks 10th all time on the Silvertips goal scoring list and last season’s 39-goal campaign ranked fourth highest in Silvertips history.

Tomorrow, the Silvertips launch the 2019-20 regular season with Opening Night, 7:35 p.m. against the Tri-City Americans at Angel of the Winds Arena and finish the opening homestand on Saturday night, 7:05 p.m. against the Victoria Royals. Both games will open with broadcast coverage 30 minutes before puck drop on KKXA (Friday) and KRKO 1380 AM / 95.3 FM (Saturday) (WHL Live).