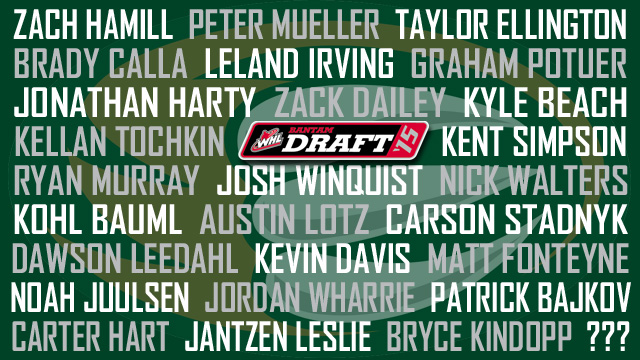 CLICK HERE for a preview of the Silvertips’ 2015 Bantam Draft with GM Garry Davidson.

3:10 pm – Just to tie things up for the day, make sure to check out our official draft press release including quotes from Director of Player Personnel Bil La Forge.  Thanks to everyone who checked out the live blog today to find out about the next generation of Silvertips.  We’ll be bringing you more post-draft coverage in the days and weeks to come. Go ‘Tips!

1:55 pm – Things started happening pretty fast after Everett’s first pick, so we didn’t get much chance to talk about the first player the ‘Tips selected – center Brett Kemp of Yorkon, SK.  The Terriers had an amazing season, going 30-1 before winning the Saskatewatchewan provincial title and earning a spot in the Western Canadian Bantam Championships.  On a team that produced four of the first 46 players picked in today’s draft, Kemp finished third in scoring with 79 points  CLICK HERE for an article about how Kemp “flew under the radar” among the Terriers star players this year.

12:50 pm – After adding 13 players over nine rounds and making two trades, it appears the Silvertips are now finished with their 2015 Bantam Draft.
The final tally on the draft looks like this:
By Position – 7 forwards, 5 defensemen, 1 goaltender
8 Canadians (3 each from BC and Manitoba, 1 from Alberta and 1 from Saskatchewan)
5 Americans (from Arizona, California, Colorado, Minnesota and Washington)

12:07 pm – Silvertips Selection:  Demetrios Koumontzis – F, Edina, MN
We’ve seen some cool names already today, but this one might take the cake:  with the 173rd pick in the eighth round, the ‘Tips select a Minnesota product in forward Demetrios Koumontzis.  Love it.  Haven’t found any full season stats for him yet, but he scored three goals and had five points in two playoff games – and that ain’t too shabby.

11:46 am – Silvertips Selection:  Zachary Bennett – Goaltender, St. Paul, MB
With their 11th selection of the draft and lone seventh-round pick (#151), the ‘Tips have taken their first goalie off the board in Manitoba native Zachary Bennett.  Bennett posted a 2.79 GAA and .898 SV% in 17 games this year for the Winnipeg Sharks Bantam AAA club.  Everett has had plenty of success with late-round goaltenders in recent years (Austin Lotz was a 7th rounder in 2010 and Carter Hart was an 8th rounder in 2013), so hopefully Zachary can follow suit!

11:05 am – Ten picks in the books for Everett over the last five rounds, and with round six complete it’s finally time for a break!  Lunchtime in Calgary marks the end of the hot-and-heavy middle rounds for the Silvertips, who now hold only their own picks the rest of the way.

10:53 am – Silvertips Selection:  Will Brown – Defenseman, Denver, CO
The ‘Tips continue to alternate between Canada and the U.S. with their last of three sixth-round picks (#129), taking defenseman Will Brown of Denver, Colorado.  Fourth American picked by Everett. Welcome Will!

10:48 am – Silvertips Selection:  Ethan Scardina – Center, Surrey, BC
Everett selects a fourth-straight forward with pick #121 with another Vancouver-area player in Ethan Scardina.  He had 8 points (4g/4a) in 18 games for the Delta Hockey Academy, where he was a teammate of Ty Smith, this year’s first overall pick.

10:45 am – Silvertips Selection:  Dawson Butt – Center, Buckley, WA
We’re into the sixth round now, where Everett will draft three times thanks to picks acquired from Moose Jaw (for Austin Adam) and Edmonton (for Reid Petryk).  The first of those with the 118th pick is a Washington native in forward Dawson Butt of Buckley!  Dawson played in the Sno-King association this season, and we hope he’ll be playing WHL hockey in Shohomish County someday as well!

10:35 am – Silvertips Selection:  Orrin Centazzo – Forward, Marwayne, AB
Another product of the Lloydminster Heat bantam program is Everett’s next pick at #107: Orrin Centazzo of Marwayne, Alberta, which is not far from Lloydminster.  Centazzo had 39 points (22 goals and 17 assists) and 54 penalty minutes in 30 games this season.

10:15 am – Silvertips Selection:  Gianni Fairbrother – Defenseman, North Vancouver, BC
The ‘Tips are back in Vancouver for another defenseman in Gianni Fairbrother of the Burnaby Winter Club, measuring in at 5-foot-8 and 155 pounds.  In five games at the BC provincial championships, Fairbrother scored one goal and assisted on another.

10:02 am – Silvertips Selection:  Ryan Savage – Center, Scottsdale, AZ
With the second pick in the 4th round (68th overall), the Silvertips have taken our first American-born player in Arizona-native Ryan Savage. Welcome Ryan!  NHL fans out there might know of his father Brian, who spent many years with the Montreal Canadiens and also played for Arizona, St. Louis and Philadelphia.

9:56 am – Silvertips Selection:  Montana Onyebuchi – Defenseman, Dugald, MB
The ‘Tips are right back at it with their own 3rd round pick (63rd overall), which they’ve used to take another defenseman: 6-foot-1, 180-pound Montana Onyebuchi from Manitoba.  Montana had 15 points (5g/10a) and 80 penalty minutes in 32 games for the Eastman Selects.

9:51 am – Silvertips Selection:  Ian Walker – Defenseman, Vancouver, BC
With the 60th overall pick they just acquired from Red Deer, the ‘Tips have selected D Ian Walker of Vancouver, BC.

9:40 am – Trade Announcement:  the Silvertips have acquired Red Deer’s 3rd round pick (60th overall) today and a conditional 4th rounder in 2017 in exchange for 19-year-old forward Ivan Nikolshin.  The ‘Tips will now pick 60th and 63rd in the third round. Best of luck in Red Deer, Ivan!

9:30 am – Silvertips Selection:  Brett Kemp – Center, Yorkton, SK
With the 41st overall pick in the second round of the 2015 WHL Bantam Draft, the ‘Tips have selected Center Brett Kemp from Yorkton, SK.   Kemp totaled 79 points (37g/42a) in 30 game for the Yorkton Terriers Bantam AA team this season.  Welcome to the ‘Tips, Brett!

9:16 am – The second round is off and running with seven picks already off the board.  No stage time or TV interviews for Bil La Forge in the first round this year, but it’s almost time to shine with Everett’s first selection!

8:59 am – The first round of the draft is now complete, and the ‘Tips are preparing to join the fray in the second round.  Everett tied with Calgary for the third best record in the WHL this season, but the Hitmen had more wins, which means the ‘Tips will make the 19th pick in each round for the rest of the day (with the exception of the fourth round, where Saskatoon again owns Everett’s pick from the Graham Millar deal last summer).

8:41 am – with the 19th overall pick gained from the Silvertips, Saskatoon selects forward Chase Wouters. Another Lloydminster, AB product from the Lloydminster Heat bantam program.  Lloydminster is not a big city, but has produced plenty of big-time prospects lately.  In addition to soon-to-be Silvertips Jantzen Leslie and Bryce Kindopp, the “Border City” (located at the Alberta-Saskatchewan border) has also produced Brandon defenseman Kale Clague (sixth overall in 2013) and now two first-round picks this year.

8:08 am – As we approach the midway point of the first round, Spokane and Moose Jaw have already made two picks each due to choices acquired in 2013 trade deadline deals.  The Chiefs got Saskatoon’s first-round pick in exchange for Collin Valcourt as the Blades geared up for the 2013 Memorial Cup, while the Warriors picked up Kamloops’ first-rounder in exchange for defenseman Joel Edmundson.

7:38 am – …and we’re underway! The Spokane Chiefs have just started the proceedings with a pick they gained via trade from the Saskatoon Blades.  As expected, the Chiefs selected D Ty Smith, who is from Lloydminster, Alberta.  Smith actually played alongside Silvertips’ 2014 first-round pick Jantzen Leslie (as well as forward Bryce Kindopp) last season at the Bantam level.  Congrats Ty!

7:26 am – The Silvertips won’t be invovled in the actually just yet, however. Everett’s first-round pick (19th overall) belongs to the Saskatoon Blades by virtue of the Nikita Scherbak trade back in September.  I’d say that worked out pretty well for the ‘Tips however, as Scherbak recorded one of the best seasons in franchise history with 82 points to lead the way for Everett offensively.

7:15 am – Wakey wakey, Silvertip Country!  Glad you’re up bright and early to join us for the start of the 2015 WHL Bantam Draft!  I’m Travis Huntington and I’ll be here providing live updates of the proceedings throughout the day.  You can also follow along via Twitter, where our official team account (@WHLSilvertips) will be keeping track of Everett’s picks and any Silvertips-related developments.

It’s the 13th draft day in franchise history, where the ‘Tips will look to identify the best 2000-born players from around Western Canada and the Western U.S. to help lead the franchise into the next decade.  On a personal note, it makes me feel very old that players born in the new milennium are about to embark on WHL careers, and I’m sure I’m not the only one.