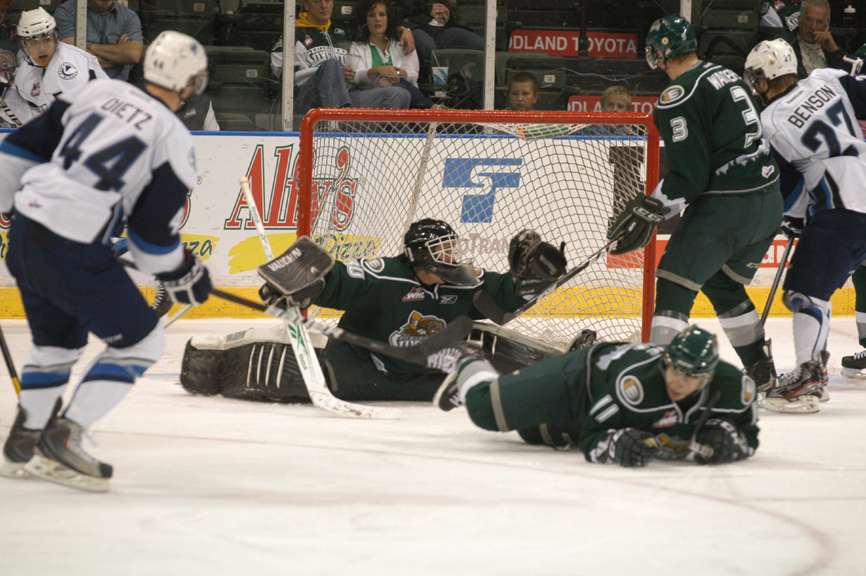 EVERETT, WA – 16-year-old rookie goaltender Austin Lotz made 50 saves and was named the game’s first star in his WHL debut, but the Saskatoon Blades topped the Everett Silvertips 4-2 Friday night at Comcast Arena.  The ‘Tips will 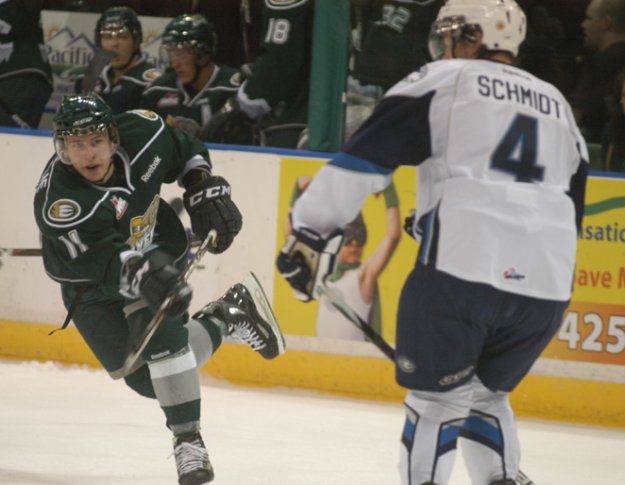 now head to Spokane tomorrow before taking on Tri-City Sunday at home.

Lotz stayed busy his first Silvertips appearance, facing 53 shots to hold Everett in the game despite being outshot 54-35 in total.  Ryan Murray and Cody Fowlie both had goals for the ‘Tips, who once again rallied to within one goal of tying the score late before Saskatoon sealed the victory with an empty-net goal.

Lotz did not see a shot on net until four minutes into the first period, but ended up facing 20 shots before the first 20 minutes were out.  Saskatoon managed to get on the board with a power-play goal from Lukas Sutter, who jammed home a loose puck in front to make it 1-0 after one.

An Everett powerplay halfway through the second period would turn against them as Saskatoon’s Jesse Paradis netted a short-handed goal to put the deficit at 2-0.  Defensemen Ryan Murray would bring the Silvertips back within one as his deadly shot from the blue line found the top corner of Andrey Makarov’s net.  After a competitive period the Blades would go to the locker room with a 2-1 lead.

Saskatoon re-took the two-goal edge in the opening minutes of the third on a rebound powerplay goal by Brett Stovin.  As they have so often done already this year however, the ‘Tips again made it a one goal game when Cody Fowlie intercepted a pass a center and came in on a shorthanded breakaway before backhanding the puck into the top corner to make it 3-2.  As Everett pushed hard to tie the game late with the an extra attacker on, the Blades’ Darian Dziurzynski managed to score into the empty net to seal the 4-2 Saskatoon victory.

Andrey Makarov (6-0-0-0) stayed undefeated this season with a 33-save effort in goal for the visitors.  The ‘Tips finished 0 for 2 on the powerplay, while the Blades scored twice in six opportunities.

The Silvertips will now travel east to Spokane for a road game against the Chiefs Saturday night at 7:05, with pregame radio coverage starting at 6:30 on Fox Sports 1380 AM.  Everett will then be right back on home ice at 5:05 pm Sunday afternoon however, facing the Tri-City Americans for the first time this year in a U.S. Division battle at Comcast Arena.