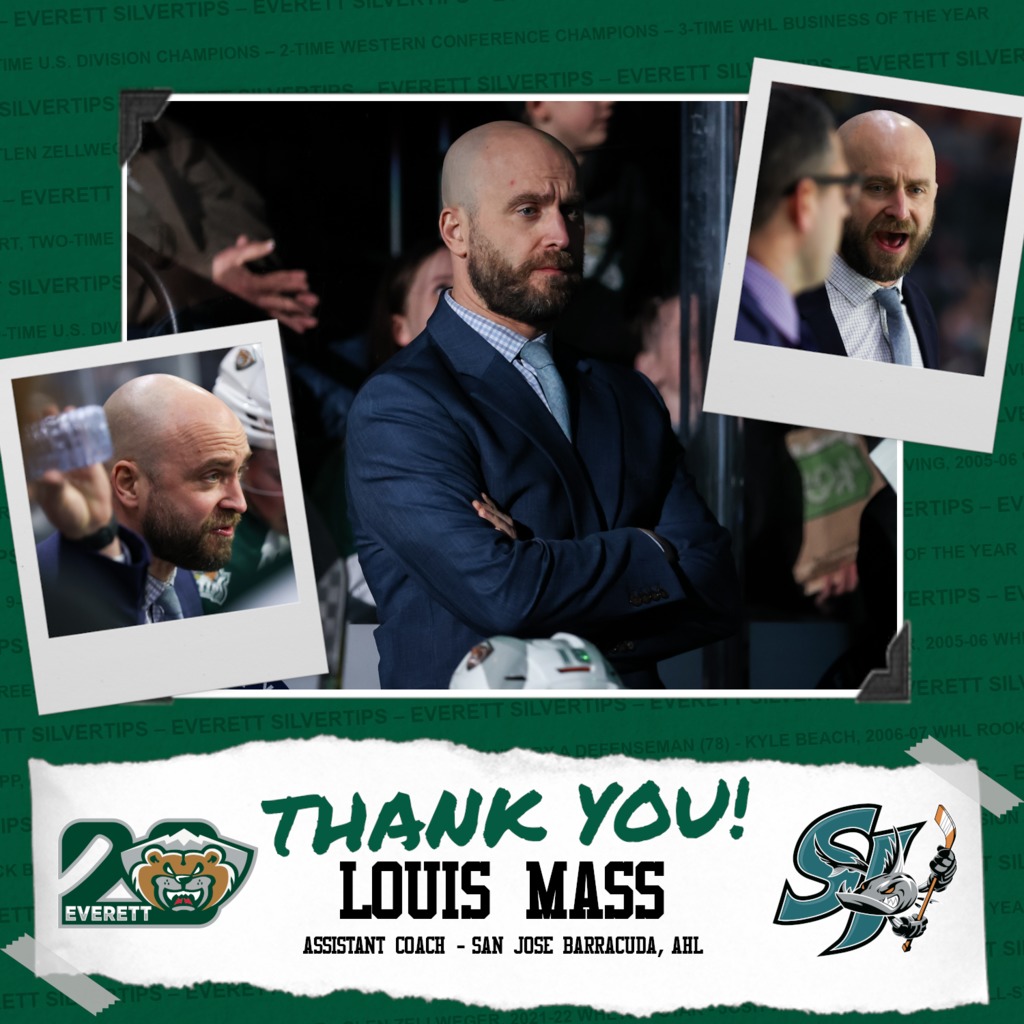 EVERETT, Wash. — Former Everett Silvertips associate coach Louis Mass has been hired by the San Jose Barracuda of the American Hockey League as an assistant coach. Mass departs the Silvertips organization after four seasons behind the bench in assistant and associate capacities.

“It has been an honor and a privilege to be a part of the Everett Silvertips family,” said Mass. “I will be forever grateful to the players, staff and fans for making it the experience of a lifetime. I’d like to extend a special thank you to [owner] Bill Yuill, [chief operating officer] Zoran Rajcic and [general manager/head coach] Dennis Williams for their leadership, guidance and support. Your commitment and passion for player development has made the Everett Silvertips the standard-bearing organization in the WHL.”

“We’re very excited for Louis,” commented Silvertips head coach/general manager Dennis Williams. “He’s one of the best coaches I’ve been able to work with over the years. He’s passionate about the job, passionate about players’ growth, and passionate about getting players to that next level. I knew it wouldn’t be long until Lou had the opportunity to move to a higher position. He’s a great coach and he’s one of my best friends. They got a great coach in San Jose, but also a really loyal, dedicated coach that’s going to do an unbelievable job. I couldn’t be happier for him.”

Mass also coordinated the Silvertips’ penalty kill, which ranked as the second best in the Western Hockey League during his four-year tenure (81.84% kill rate, behind only the Portland Winterhawks’ 82.78%). Everett twice finished in the top-three in WHL penalty kill percentage, even leading the league in 2020-21 with an 88.4% successful kill.

“We’re in a developmental league for everybody,” Williams explained. “Everybody wants to get to the next level. Whether that’s [former Silvertips assistant coach] Mitch Love getting to go to Saskatoon as a head coach and Stockton as a head coach, or [former longtime Everett equipment manager] James Stucky joining the Kraken, those things are terrific for us.”

From the San Jose Barracuda’s release:

“Louis and Kyle [Hagel] come from the WHL as highly respected coaches,” said general manager Joe Will. “They both possess excellent communication skills and the aptitude to teach the game. We think they will both be great additions to John’s staff, and we’re excited for them to join the organization.”

“Through their experiences as both coaches and as a players, Louis and Kyle bring varying styles and backgrounds to our organization that will be of great benefit to our prospects,” said head coach John McCarthy. “They have proven their prowess as teachers and developers of young players, and we’re excited to have them join our team.”