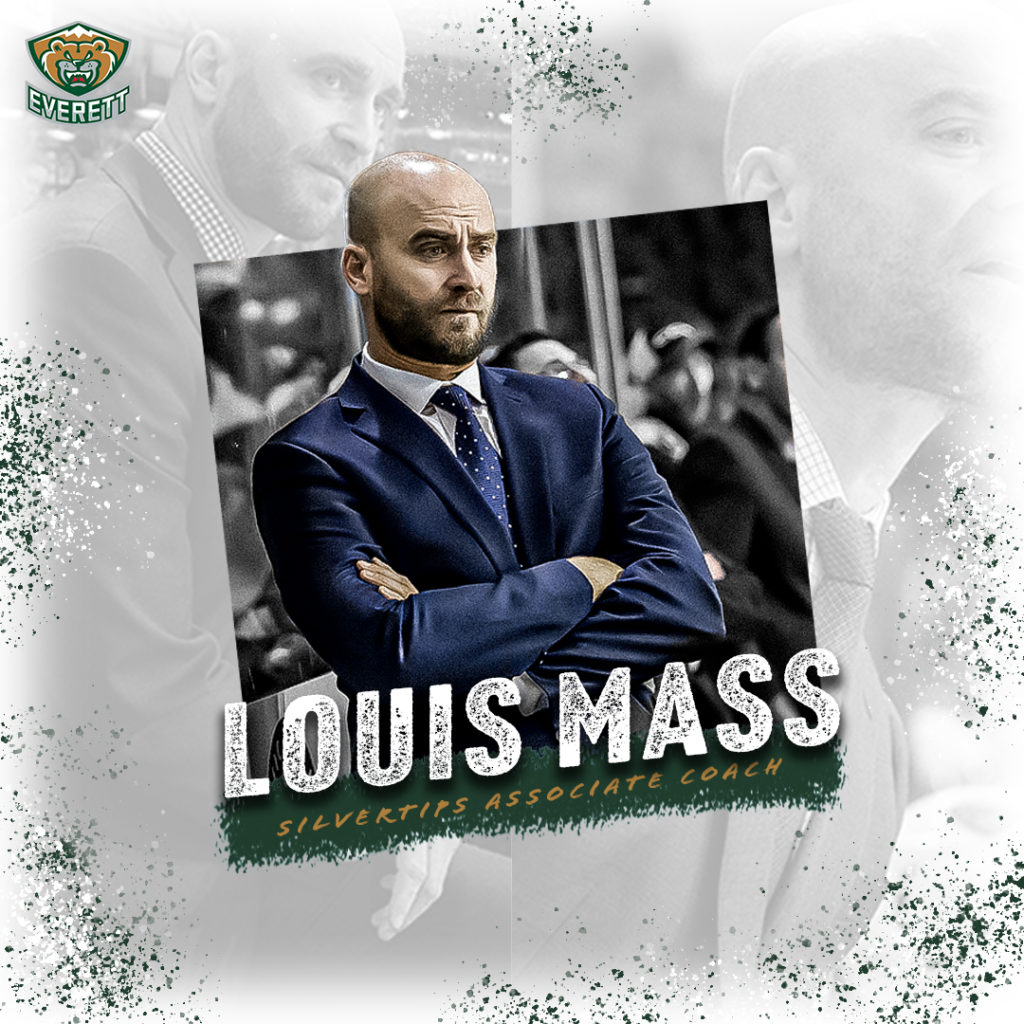 “As one of the most intelligent, caring, and detailed people I’ve ever known, Louis Mass has done an incredible job leading to a well-deserved promotion as associate coach,” said Williams. “He understands our players, puts every ounce of energy into helping bring the best out of them, and is thorough with his details and preparation. It’s made an impact on everything from our penalty kill to overall culture. He wants to get better every day and continue to grow in this profession. In turn, I enjoy coming to the rink every day learning something new from him. Those qualities are positioned to make a tremendous impact on our team in a role he’s earned.”

Williams continued, “We’re proud to see progress from a very challenging period over the last 14 months and new opportunities on the horizon have allowed us to resume a search to fill an additional assistant coach role, which we’ll look forward to announcing soon.”

“This has been an incredible organization to be a part of, and the opportunity to continue to work alongside Dennis Williams was a priority for me,” said Mass. “A goal of this organization is not only to develop and advance its players, but staff as well – and I feel this is the best place for me to learn and grow as a coach. I am excited about the future here and am beyond grateful for the support and trust from Chief Operating Officer Zoran Rajic, Owner Bill Yuill, and our amazing fans.”

Mass enters his fourth season behind the Silvertips bench as a part of two U.S. Division title squads and will continue to work with the program’s defensemen and penalty kill units. Under his guidance, the Silvertips have led the entire Canadian Hockey League with the lowest goals-against-average per game in two of the last three seasons and last year during the pandemic shortened year, the Tips led the WHL in penalty kill percentage (88.4) and were second in the league and entire CHL with 1.9 goals allowed per game.

The native of Anchorage, Alaska has helped five Silvertips develop into NHL Draft selections or sign three-year, entry level contracts: Kasper Puutio (Florida), Ronan Seeley (Carolina), Gianni Fairbrother (Montreal), Wyatte Wylie (Philadelphia), and Jake Christiansen (Columbus). In 2018-19, while he led a defensive corps that allowed the WHL’s second lowest average of 26.9 shots per game, he helped Fairbrother, Wylie, and Christiansen reach the double-digit plateau in goals. After the completion of his first two seasons, Seeley (2019) earned an invite to Team Canada’s U-18 selection camp, in preparation for the 2019 Hlinka Gretzky Cup, and Olen Zellweger earned spots with Team Canada at the World Under-17 Hockey Challenge, Hlinka Gretzky Cup Team Selection Camp, and a gold medal at the 2021 IIHF Under-18 World Championship.

Mass previously served as assistant coach at the University of Alaska-Anchorage (NCAA) for three seasons (2015-18), helping promote eight Seawolves onto the pro ranks after 13-plus seasons as a player or coach at the professional level with the Alaska Aces, Louisiana IceGators, Pee Dee Pride, and Pensacola Ice Pilots of the ECHL, where as a player or coach helped guide the Aces to three Kelly Cup championships, four trips to the Kelly Cup Finals, and five Brabham Cup honors for top regular season record. He spent eight seasons (2007-15) with the Aces in assistant coach, director of player development, and strength and conditioning roles and for four years helped the Aces lead the entire league in fewest goals against per game. During his tenure, the Aces helped promote 69 players to the American Hockey League level, including former Silvertips forwards John Lammers and Chris Langkow. Four players during that span were named to the ECHL All-Rookie Team, and 12 players were named First or Second Team ECHL All-Stars.

Mass skated for five-plus seasons as a defenseman in the ECHL with Alaska, Louisiana, Pee Dee, and Pensacola, helping the Aces capture the Kelly Cup title in 2005-06 with the league’s top record, 113 points at 53-12-7, alongside Silvertips alumnus and forward Alex Leavitt (who led the league with 91 points in 72 games). The 6-foot-4, 215 pound former blueliner also suited up for four seasons at Bowling Green State Univ. (NCAA) where he was a teammate with Williams and served as assistant captain of the program as a 2000-01 senior.

The owner of Elite Sports Performance, a strength, conditioning, and skill development facility for athletes in Alaska, he has also served as a board member or coach with the Anchorage Hockey Association and USA Hockey as a Coaching Education staff member. Mass makes his primary residence in Snohomish, Wash.