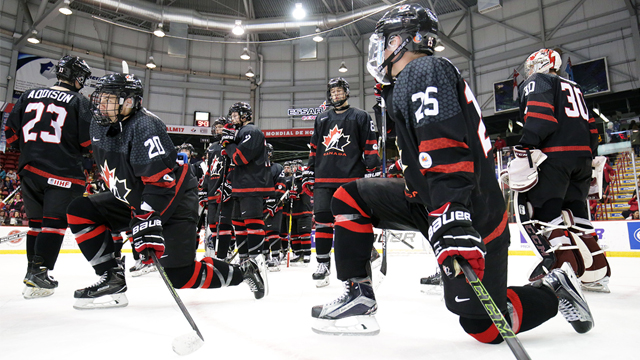 Written in conjunction with WHL.ca

Nine WHL players have won silver with Team Canada Black at the 2016 World Under-17 Hockey Challenge in Sault Ste. Marie, Ont. Brett Kemp, currently in his first year as a Silvertip, contributed in the silver medal finish by lacing up in six games for Canada Black and completing a robust experience in competition with promising, youthful talent served to take the stage in the WHL.

Competing in his second straight season behind the bench at the national level, Mitch Love, a gold medalist last year with Canada Red, returns to the Silvertips coaching staff after a pair of wins in the tournament’s competition against Sweden (this year’s gold medalist) and Russia.

Ty Smith (Spokane Chiefs) of Team Canada Black and Jett Woo (Moose Jaw Warriors)  of Team Canada White were both named to the tournament all-star squad after strong showings over the course of the week.

Smith finished the tournament with two goals, two assists and four points in six games to earn all-star honours while Woo was named as well after recording a goal and three assists over six contests.

“We went through our process – we stuck to everything that we tried to do on a daily basis, ever since we came here a couple weeks ago to the Soo, and overall the kids really left it on the ice,” said Team Canada Black head coach Paul Boutilier of his team’s progress through the tournament. “We’re proud of the effort. Every player in there gave it their all. The Soo was fantastic – the people, our volunteers, the whole group. Our local committee here did a real good job. We were proud to come here and we experienced a real great hockey town.”

Sweden claims its second gold medal in the history of the event and first since 2013 while Canada medals for the second time since changing to a three team format in 2014, following up Team Canada Red’s gold medal effort last year.

Kemp and Love join the Silvertips in time for their next game, Friday at Portland (1520 AM / Tips App / WHL Live).