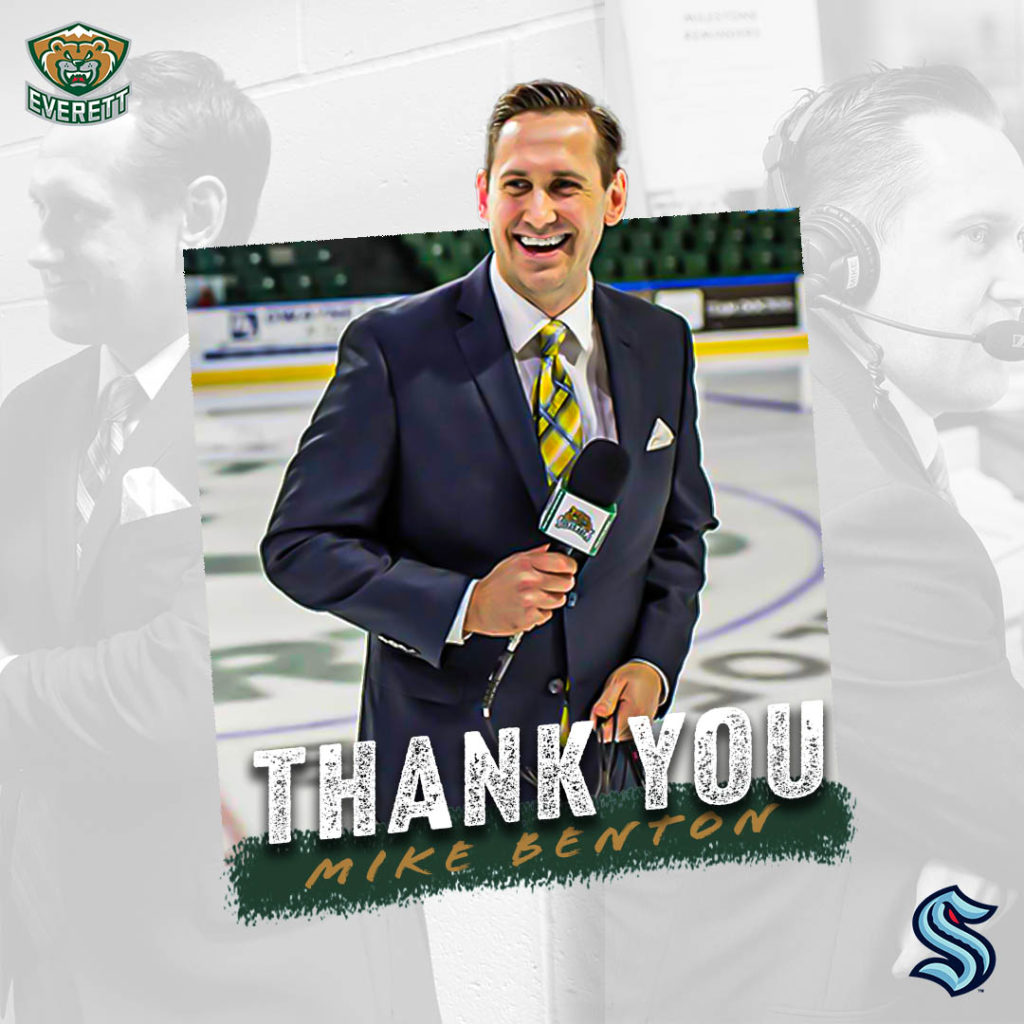 EVERETT, Wash. – The Everett Silvertips (@WHLSilvertips), two-time Western Conference champions and eight-time U.S. Division champions of the Western Hockey League, today announced that Mike Benton, radio play-by-play announcer for the Silvertips since 2015, has accepted a position with the Seattle Kraken broadcast team, serving as Radio Pre-Game/Post-Game and Intermission Host for all games heard on 950-AM KJR and its Northwest region affiliate radio network. The Silvertips are underway with their search for a new play-by-play announcer and media relations contact, with a further announcement along with 2021-22 listening details coming soon.

Benton, 40, departs for the National Hockey League after serving the Silvertips for six seasons as Director of Broadcasting and Public Relations. He joined the franchise in August 2015 and was behind the mic for four U.S. Division titles, the 2018 Western Conference championship, six playoff series victories, a Silvertips win in the longest playoff game in CHL history (five overtimes at 151:36) and 12 Silvertips who either were eventually selected by clubs in the NHL Entry Draft or made their NHL debut. He reached the benchmark of 1,000 games for his broadcast career on Dec. 2, 2017 vs. Saskatoon.

In addition to his play-by-play duties, Benton served as weekly radio host of the Silvertips Hockey Show at Sporty’s Beef and Brew, supervised the team’s media relations and community activities, and managed all digital media content and growth strategy.

“This is the top of the mountain from a climb that’s been ongoing since day one of my career, to work on air in the NHL,” said Benton. “Reaching that goal while remaining local is truly an incredible dream come true for both me and my family, facing an unbelievable opportunity to join the broadcast team of NHL’s newest franchise who is igniting the presence of the game in the Pacific Northwest. Making a decision like this, however, comes with an emotional price. The Silvertips have been nothing but a top-notch establishment and pillar of support for our family. My wife, Amy, has become entrenched in her career here. Our oldest son, Lukas, has grown up watching Tips hockey his whole life. Our youngest son, Liam, was born in Everett. It encapsulates an organization I am grateful for and will always champion, and a place where it’s more than just somewhere we live – it’s ‘home’.

“I thank Mr. Bill Yuill, Zoran Rajcic, an incredible group of on-air partners and associates with KRKO, an entire collection of esteemed Silvertips coaches, players, staff I’ve had the pleasure to work with, and certainly – the fans. They made it a privilege to be here and created a special experience my family and I will never forget.”

“Mike will be sorely missed and it was evident that this opportunity for him would eventually come,” said Silvertips chief operating officer Zoran Rajcic. “But at the end of the day, this is what the Everett Silvertips are all about – preparing people to take the next step onto the pro levels and the National Hockey League. It’s exciting to see him move on, but we congratulate him for an incredible opportunity to proudly take a part of our organization to the NHL. He played such an important part of connecting our fan base with his on-air abilities and growing our brand off the air. We’ll miss his contributions, but he left a clear blueprint for success, and he’ll always be a part of our family.”

Benton is also the third member of the Silvertips staff to earn an NHL position this year, along with James Stucky (Kraken assistant equipment manager) and Chris Mast (Kraken photographer).