Mitch Love Returning Behind the Bench With Hockey Canada 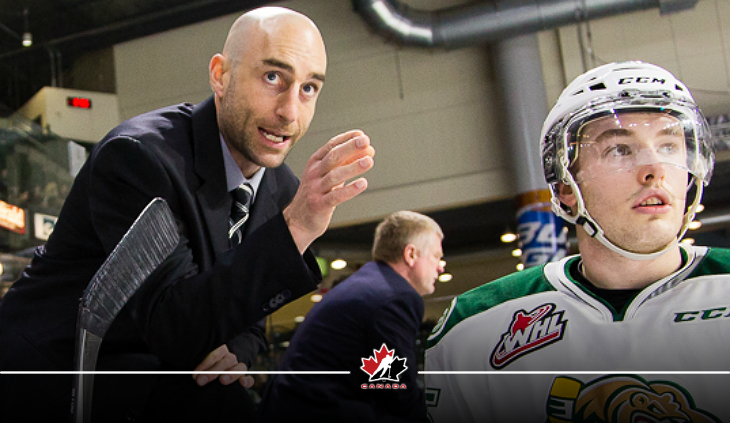 EVERETT, Wash. – Everett Silvertips (@WHLSilvertips) assistant coach Mitch Love has been named assistant coach for Hockey Canada’s national men’s under-17 squad and at the 2016 World Under-17 Hockey Challenge, serving in the position for the second consecutive year after earning gold medal in his coaching debut for the event last November. The tournament is scheduled from Oct. 30-Nov. 3 in Sault Ste. Marie, Ontario.

Love will serve with head coach Rocky Thompson (Windsor/OHL) and fellow assistant coach Ryan Marsh (Edmonton/WHL) for Team Canada Red. The announcement was made in conjunction with Hockey Canada, who selected coaching staff for the National Men’s Under-17 teams and National Men’s Summer Under-18 teams.

Love will also serve with Thompson and Marsh for Canada-Red at Canada’s national under-17 development camp, July 26-Aug. 2 in Calgary.

“It’s an absolute honor to receive this call from Hockey Canada”, said Love. “So to have another opportunity with the Hockey Canada management team, other coaches and staff members on the chase for a gold medal, is an extremely exciting honor. There is a tremendous amount of work that goes into this program that I truly enjoy, and some of the biggest rewards are the individuals you collaborate with and continuous growth you experience as a coach. I’m looking forward to working with Rocky Thompson, Ryan Marsh, and all other great individuals associated with Hockey Canada.”

“This is an exciting group of coaches that have been chosen to lead our National Men’s Summer Under-18 Team and under-17 programs as they aim to re-create the success these teams generated last season,” said Scott Salmond, vice-president of hockey operations and national teams with Hockey Canada. “These coaches have found success at many different levels in the game and bring a magnitude of experience to our programs that will help develop the top young talent in our country.”

Love, 31, helped guide Team Canada White to a gold medal in last season’s Under-17 World Hockey Challenge and will enter his sixth season behind the Silvertips bench as assistant coach. Set to be alongside head coach Kevin Constantine for his fourth year, Love has worked primarily with the Silvertips defensemen, helping produce and continuously improve the league’s top defensive clubs over the last three seasons. The Silvertips ranked fifth in goals allowed (2.8) in 2013-14 WHL play, reduced its average to second best in the league in 2014-15 (2.7), and finished second lowest in the Canadian Hockey League last season (2.3).

The Quesnel, B.C. product suited up for five years as a WHL defenseman, splitting three seasons between Moose Jaw and Swift Current before spending his final two junior seasons in Everett with 99 points, 901 penalty minutes and a +11 rating in 320 career games.  He helped the expansion Silvertips advance to the WHL Championship series in 2003-04 and the following season was named captain as an overager, before signing a free agent NHL contract with the Colorado Avalanche.

He compiled 27 points and 808 career penalty minutes over 278 games and five professional seasons spent in the American Hockey League, before wrapping up his playing career in 2010-11 with Bossier-Shreveport, who would capture to a Central Hockey League title that season.

The 2016 World Under-17 Hockey Challenge features the top players in the world born in 2000 or later, a part of the under-17 program which is the first step in Hockey Canada’s Program of Excellence. Many players who compete at the World Under-17 Hockey Challenge advance to represent Canada with the National Men’s Under-18 Team, National Junior Team and National Men’s Team.  Since the first under-17 tournament (then known as the Quebec Esso Cup) in 1986, more than 1,200 NHL draft picks have competed in the event.

The Silvertips will announce their 2016-17 schedule soon, offering full season tickets, 22-game, and 14-game plans for as little as $200 total per seat. Deposits for $50 secure a seat by visiting the Silvertips deposit portal.