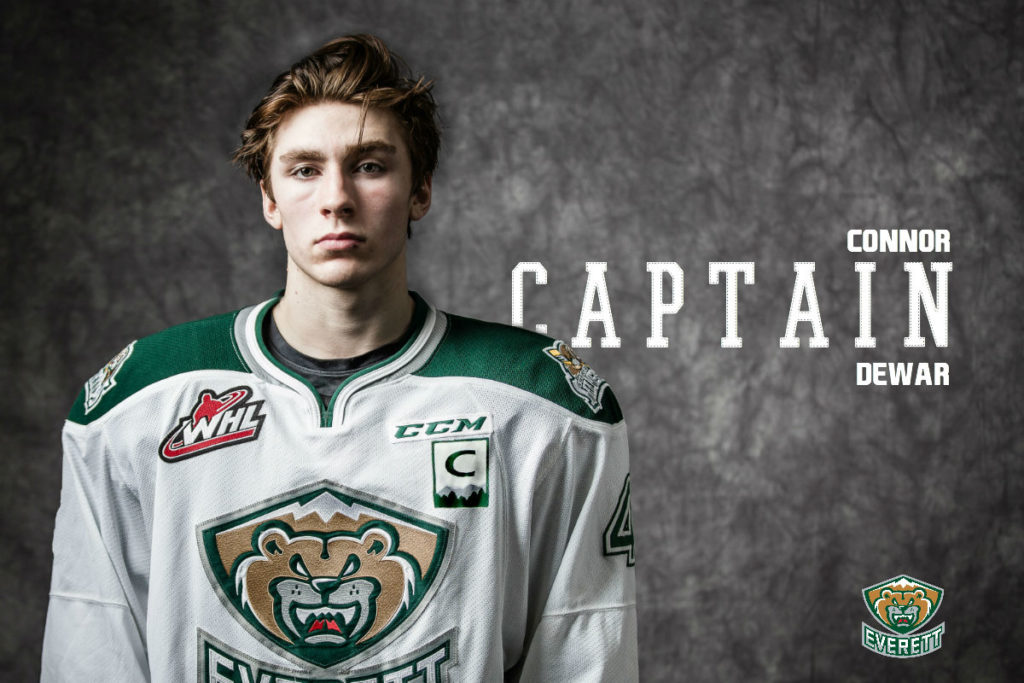 EVERETT, Wash. – The Everett Silvertips (@WHLSilvertips), two-time Western Conference champions and six time U.S. Division champions of the Western Hockey League, announced today that forward Connor Dewar has been named the 16th captain in Everett Silvertips history, scheduled to wear the “C” on his jersey for the upcoming 2018-19 WHL season.

“Connor has developed into a fearless and effective leader, and his day-to-day approach is a natural fit to take the role as our next captain of the Everett Silvertips,” said Silvertips head coach Dennis Williams. “He brings remarkable character, a tireless work ethic, and proven abilities to the table. His dedication and the example he sets every day was vital to the success we enjoyed this past season, and makes perfect sense to be the next in line to wear the ‘C’ as a Silvertip.”

Dewar, 18, was named the Silvertips Most Dedicated Player this past season while serving as an alternate captain, one where he shattered career highs in points (68), assists (30) and goals (38), leading the Silvertips in goals while becoming the youngest player in Silvertips history to reach the 38-goal mark. In the postseason, he was second on the program in points (26) and goals (12) in all 22 games, leading the entire league in plus-minus (+24) and shots on goal (106). He has been a part of two Silvertips teams that captured the U.S. Division title, and this season earned their second trip to the Rogers WHL Championship Series as Western Conference champions.

In Game 6 of the Western Conference Championship Series on Apr. 30, his goal at Tri-City with 10:08 left in the third period sparked a three-goal rally by the Silvertips out of a 5-2 deficit, eventually won by Kevin Davis’ overtime power play goal for the second Western Conference title in franchise history.

Dewar skated last summer in development camp with the Toronto Maple Leafs and is one of three Silvertips listed on the final rankings by National Hockey League Central Scouting for the upcoming 2018 NHL Entry Draft.

The 1999-born forward has missed only five games in his WHL career, totaling 116 points (63g-53a) and a +19 rating in 211 career games, all spent in a Silvertips jersey. At age 16 he scored in his WHL debut, on opening night of the 2015-16 season in a Silvertips victory at Prince George. He was named co-recipient of the Silvertips Iron Man award and named Silvertips Rookie of the Year in 2015-16, and the following season became the youngest player in Silvertips history to earn the Booster Club F.I.E.R.C.E. Predator Award.

“It’s a great honor to be named captain of the Everett Silvertips and earn the trust of the coaches for this type of role,” said Dewar. “When you walk into the dressing room and see photos of great players who have worn that ‘C’ and moved onto pro careers and successful lives, it feels very important to uphold that culture they’ve worked hard to establish. Matt Fonteyne, Kevin Davis, and Patrick Bajkov brought the same approach every day in a long run with the organization and it’s my responsibility to continue helping us aim for the success they got us to.”

Silvertips Season Tickets are available by simply placing a $50 deposit at www.everettsilvertips.com/ticketcentral, ensuring an RSVP for Select-A-Seat on June 2 at Angel of the Winds Arena in downtown Everett, or by calling (425) 252-5100.