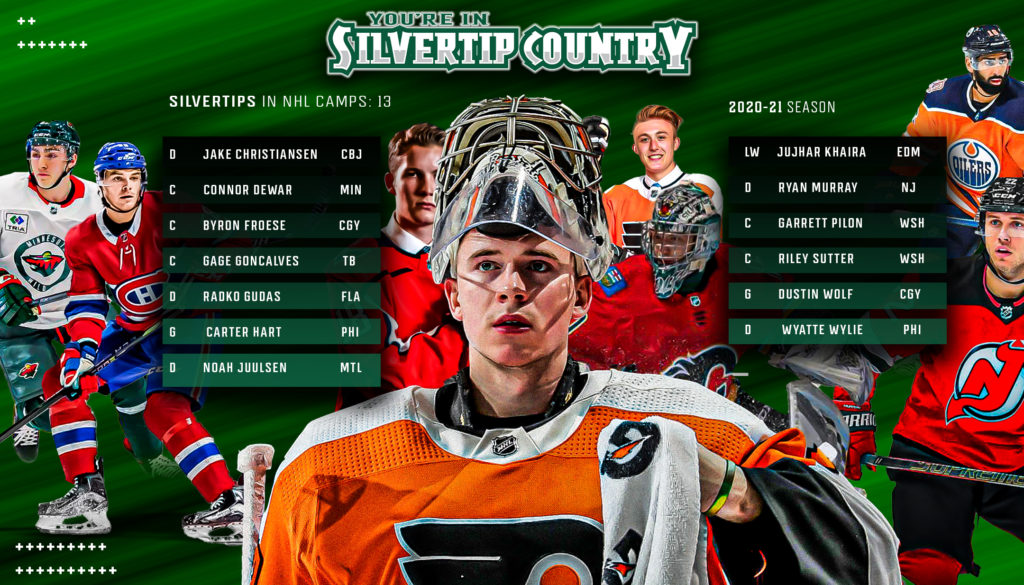 Below is the complete list of following players in NHL camps:

Christiansen, 21, finished seventh on the Silvertips all-time games played list (297) and had 152 points and 114 penalty minutes in five WHL seasons – all in a Silvertips jersey. He helped guide the Silvertips to the Western Conference title in 2017-18, was second in goals among WHL defensemen (22) last season in 38 games and was named to WHL Western Conference Second Team All-Star. He signed a three-year, entry level contract with the Blue Jackets on Mar. 4, 2020.

Dewar, 21, last season had 19 points in 52 games and was +10 with the Iowa Wild (AHL) in his first professional season. The native of The Pas, Manitoba was Silvertips captain in 2018-19 as a WHL Western Conference First Team All-Star, posting back-to-back seasons of reaching the 30-goal plateau and helping guide the Silvertips to the 2017-18 Western Conference title. In four Silvertips seasons, he had 197 points in 270 games and is sixth on the franchise goal scoring list (99). He was selected by Minnesota in the third round of the 2018 NHL Draft.

Froese, 29, has served as captain of the Stockton Heat (AHL) for the last two consecutive seasons, has 205 points in 330 AHL games and has 16 points in 110 career NHL games with Toronto, Tampa Bay, and Montreal. The Winkler, Manitoba suited up with the Silvertips for two seasons and was third on the club with 29 goals in 2009-10, additionally racking up 61 points in 70 games.

Goncalves, who turns 20 on Jan. 16, was selected by Tampa Bay in the second round of the 2020 NHL Draft and last season was second on the Silvertips in goals (33) and points (71) in 60 games. The Mission, British Columbia native is scheduled to enter his third full WHL season and has 86 points in 128 career games with the Silvertips.

Gudas, 30, will be competing in his ninth NHL season and has 120 points, a +26 rating and 619 penalty minutes in 479 career games with Washington, Philadelphia and Tampa Bay, recently signing with the Florida Panthers as a free agent on Oct. 9, 2020. The Kladno, Czech Republic native had 37 points (7g-30a) and was +45 in 65 games with the Silvertips in 2009-10, originally selected 20th overall by the Silvertips in the 2009 CHL Import Draft.

Hart, 22, will be entering his third season with the Flyers and last season helped lead Philadelphia to the second round of the Stanley Cup Playoffs with a pair of postseason shutouts. The native of Sherwood Park, Alberta was named NHL Rookie of the Month (January) in 2018-19 and is 40-26-4 with a shutout, a 2.59 goals-against-average and .915 save percentage in 74 career NHL games. He spent four seasons as a Silvertip, earning the Four Broncos Memorial Trophy as the WHL’s most valuable player in 2017-18, earned the Del Wilson Trophy (WHL Goaltender of the Year) three times and was a two-time recipient of the CHL Goaltender of the Year award along with a career record of 116-46-10-12, 26 shutouts (tied for first, all-time in the WHL), a 2.01 goals-against-average and .927 save percentage as a Silvertip.

Juulsen, 23, has 44 games of NHL experience with the Canadiens and was selected in the first round of the 2015 NHL Draft, returning to skate in 13 games last season with Laval (AHL) after missing parts of two seasons due to injury. The native of Abbotsford, British Columbia was captain of the Silvertips in 2016-17 when he was named WHL Western Conference First-Team All-Star and earned 124 points and a +48 rating in 240 career games as a Silvertip.

Khaira, 26, will be entering his sixth season with the Oilers and has 52 points in 218 career NHL games along with four playoff games, helping guide Edmonton back to the postseason in 2019-20. The Surrey, British Columbia native had 16 goals and 43 points in 59 games with the Silvertips in 2013-14, originally selected by the Oilers in the third round of the 2012 NHL Draft.

Murray, 27, will be entering his eighth NHL season after posting 110 points in 347 career games with the Blue Jackets and being acquired by the Devils on Oct. 8, 2020 from Columbus. The native of Regina, Saskatchewan earned 121 points and was +51 in 191 career games, spanning all five seasons with the Silvertips. He was selected by Columbus, second overall in the 2012 NHL Draft and was captain of the Silvertips for two straight seasons, making four career WHL Playoff appearances.

Pilon, 22, was selected in the third round of the 2016 NHL Draft by the Capitals and last year had 18 goals and 36 points in 61 games, along with a +7 rating for the Hershey Bears (AHL), previously competing in 207 career WHL games with the Silvertips and Kamloops Blazers with 192 points along with 35 points in 35 career WHL Playoff games. He helped guide the Silvertips to the 2017-18 Western Conference title, leading the program in playoff scoring with 28 points (11g-17a) in 22 games.

Sutter, 21, suited up in 25 games with Hershey (AHL) in his first pro campaign last season and was selected by Washington in the third round of the 2018 NHL Draft. The Calgary native had 136 points in 204 career WHL games, all with the Silvertips, and enjoyed a career high 53 points (25g-28a) in 68 games in 2017-18 when he was a part of the Silvertips run to the Western Conference title. In that postseason, he had 19 points in 21 games.

Wolf, 19, will be a late arrival to Calgary’s camp after competing for Team USA in the World Junior Championship in Edmonton, aiming for their fifth all-time gold medal. The Gilroy, Calif. native will be entering his fourth season as Silvertips netminder and last season was named CHL Goaltender of the Year and recipient of the Del Wilson Trophy, leading all CHL goaltenders with a 1.88 goals-against-average, .935 save percentage, nine shutouts and posting a 34-10-2-0 record. He was selected by the Flames in the seventh round of the 2019 NHL Draft and is 88-31-4-2 with 20 shutouts and a .934 save percentage in 127 career WHL games, all with the Silvertips.

Wylie, 21, enters his first pro season after being selected by the Flyers in the fifth round of the 2018 NHL Draft and just wrapped up a four-year career as a Silvertip, earning 152 points and finishing with 272 games, 12th on the Silvertips all-time list and a member of the Tips 2017-18 Western Conference championship squad. The Everett native led all league defensemen in assists (50) and posted 64 points (14g-50a) in 60 games last season, helping the Tips win 46 games, most in the entire WHL before the stop of the season due to the coronavirus pandemic.

In addition, the following are Silvertips alumni with NHL entry-level contracts and AHL contracts, or Silvertips players whose draft rights belong to the respective teams from the NHL Entry Draft and are not skating in camp, but are active for the 2020-21 season: