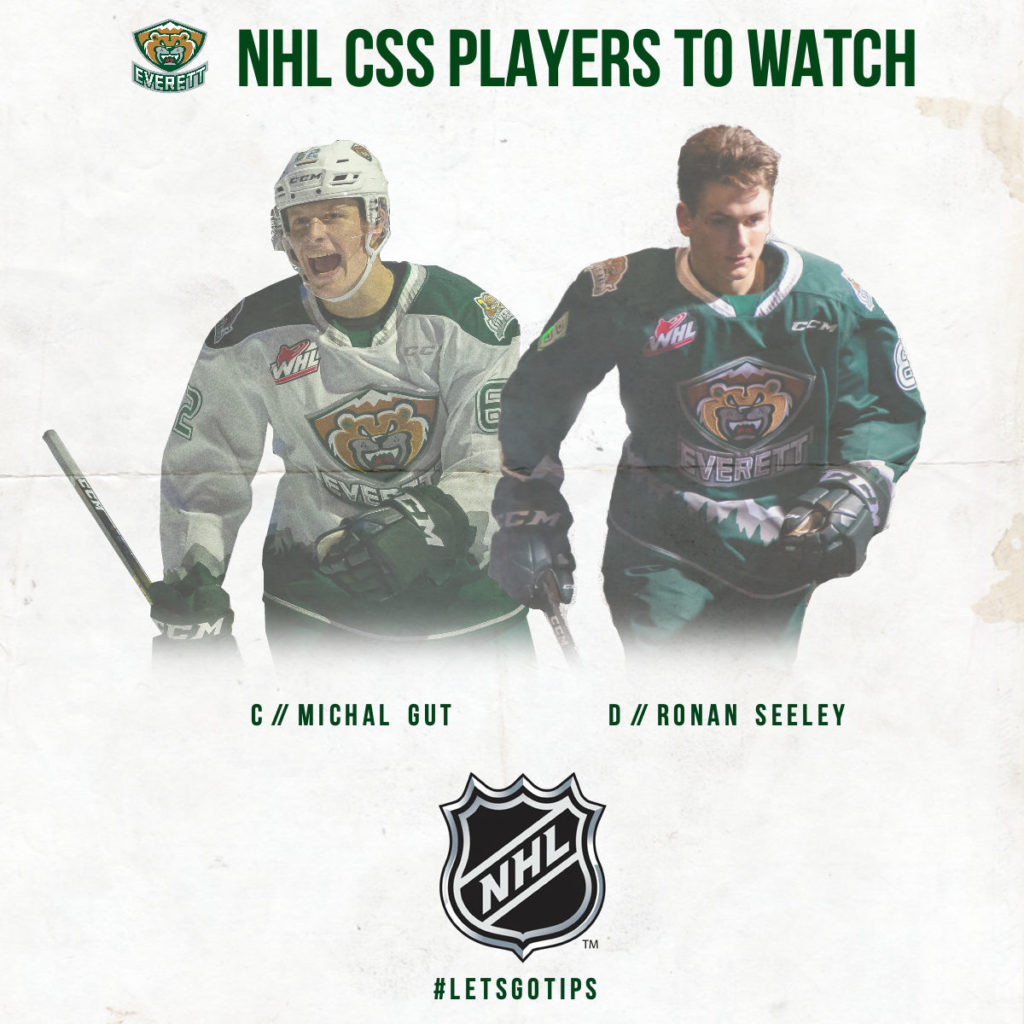 Gut and Seeley were both listed with a “C” rating among North American Skaters in the preliminary rankings of players eligible for the 2020 NHL Draft, released by NHL Central Scouting today.

A total of 44 players from the Western Hockey League were named to the preliminary rankings. Players with a “C” listing are considered possible fourth, fifth, and sixth round choices in the upcoming draft. Last season, the Silvertips had two players listed in the preliminary rankings and selected in the NHL Draft: defenseman Gianni Fairbrother (Montreal) and goaltender Dustin Wolf (Calgary). A total of 19 Silvertips have advanced to suit up and play in the NHL since the organization began play in the 2003-04 season.

Gut, a 2002-born forward, is tied for fourth among WHL rookies with five points (1g-4a) in three games and was selected by the Silvertips in the first round (57th overall) in the 2019 Canadian Hockey League Import Draft. During the summer, Gut suited up for Team Czech Republic at the Hlinka Gretzky Cup and led the program with four points (3g-1a) and three goals four tournament games, also logging seven points (4g-3a) across seven games in international competition.

Last season he was tied for third on Pirati Chomutiov (Czech U19) with 34 points in 33 games, additionally ranking fifth with 20 assists while adding four points in five playoff games and tying the club lead with three postseason goals. The 5-foot-10, 174 pound forward additionally suited up in ten games with Pirati Chomutiov’s Czech Extraliga club, and represented the Czech Republic at the World U17 Hockey Challenge with a goal in five games. The season prior, Gut racked up 38 points (19g-18a) in just 19 games for Pirati Chomutiov’s U16 club, and was second on the U18 program with 40 points (19g-21a) in 33 games while ranking second with a +17 rating.

The native of Kadan, Czech Republic has 35 points (15g-20a) in 49 games across all International Junior competition, and 81 points (42g-39a) along with a +40 rating in 57 games for his career at the U16 level. With the Team Czech Republic at the European Youth Olympic Festival last season, he earned an assist in three games and helped guide the program to a gold medal.

Seeley, a 2002-born defenseman has a pair of assists and a +2 rating in five games and played his first season for the Silvertips in 2018-19 where he earned a goal and eight assists in 52 games while totaling a +11 rating, helping guide the Tips to their third consecutive U.S. Division title. Seeley also competed in ten playoff games, scoring a goal and adding a +4 rating. He earned his first career WHL point with an assist on Oct. 12, in a 5-3 win against the Edmonton Oil Kings.

Seeley also represented Canada at the World U17 Hockey Challenge last season and was selected in the first round (20th overall) by the Silvertips in the 2017 WHL Draft. In 2017-18 with the Lethbridge Hurricanes Midget AAA program (AMHL), he earned 26 assists in 30 games, ranking tied for third in points among all league blueliners. His 26 assists paced all Hurricanes defensemen and finished tied for the league lead in assists among defenseman. He also skated in five games at the WHL Cup with Team Alberta, earning three points (1g-2a) and a +5 rating in a silver medal finish.

UP NEXT: The Tips finish the four-game road swing on Wednesday at 7:05 p.m. (KRKO / WHL Live) against the host Victoria Royals at Save-On-Foods Memorial Centre and return home on Friday, Oct. 11 for a 7:35 p.m. match-up with the Blazers at Angel of the Winds Arena.