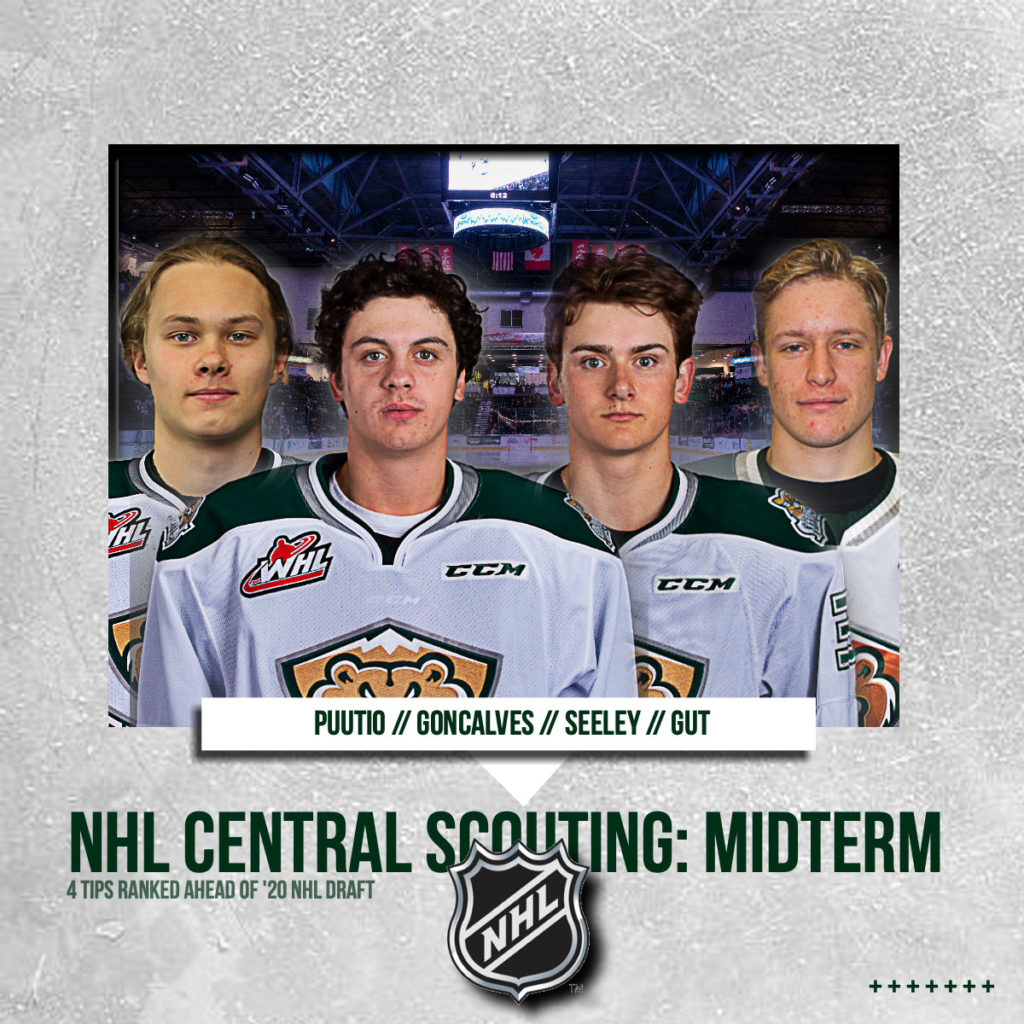 EVERETT, Wash. – The Everett Silvertips, two-time Western Conference champions and seven-time U.S. Division champions of the Western Hockey League, announced in conjunction with the WHL that Silvertips forwards Gage G   oncalves and Michal Gut, and defensemen Ronan Seeley and Kasper Puutio have been listed by National Hockey League Central Scouting in its midterm rankings, ahead of the 2020 NHL Draft on June 26-27 in Montreal, Quebec.

The four Silvertips are among 51 WHL players ranked by NHL Central Scouting, and among 43 skaters on the list. Last year, Silvertips goaltender Dustin Wolf (Calgary Flames) and defenseman Gianni Fairbrother (Montreal Canadiens) were selected in the 2019 NHL Draft, previously ranked by NHL Central Scouting. A total of 24 players in Silvertips history have been selected in the NHL Draft, and 19 have made their debut in the NHL. 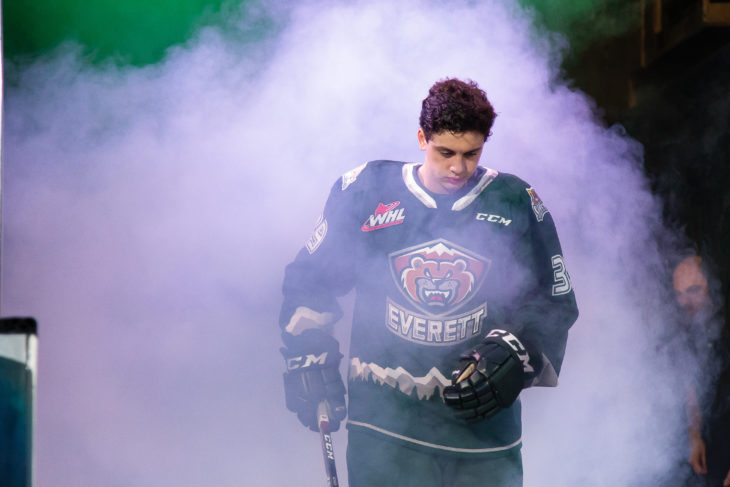 The 6-foot-1, 170 pound forward from Mission, British Columbia owns 13 multi point games and six multi goal games this season, and last year helped guide the Silvertips to their third straight U.S. Division title in his first full season of play. Originally a listed prospect of the Silvertips, has skated in 105 career WHL games, all in an Everett jersey, along with 55 points (20g-35a) and a +24 rating along. He has earned six points (2g-4a) in 10 career WHL Playoff games.

Gut, a 2002-born forward from Kadan, Czech Republic, has competed in 32 games and is tied for ninth in points (23), tied for third in game winning goals (3) and power play assists (8), and is fifth in power play points (10) among WHL rookies. The 5-foot-11, 185 pound center has logged six multi point games and three times matched his career high of three points in a game. 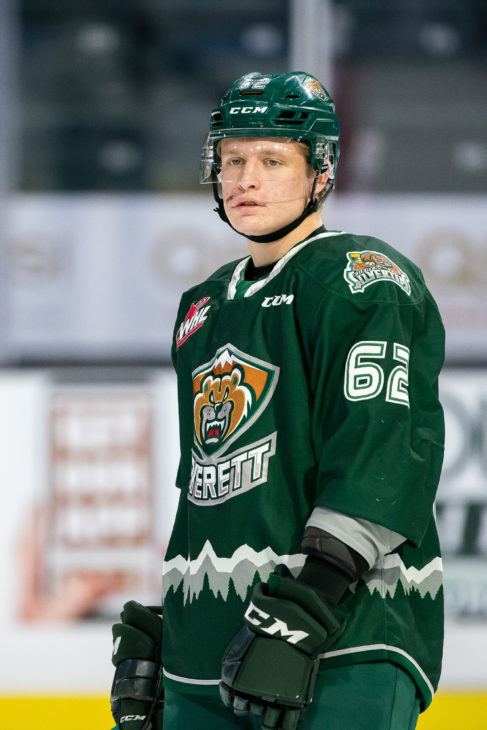 Gut was selected by the Silvertips in the first round (57th overall) in the 2019 Canadian Hockey League Import Draft. During last summer, he suited up for Team Czech Republic at the Hlinka Gretzky Cup and led the program with four points (3g-1a) and three goals four tournament games, also logging seven points (4g-3a) across seven games in international competition. Last season he was tied for third on Pirati Chomutiov (Czech U19) with 34 points in 33 games, additionally ranking fifth with 20 assists while adding four points in five playoff games and tying the club lead with three postseason goals. He represented the Czech Republic at the World U17 Hockey Challenge with a goal in five games.

Seeley, a 2002-born defenseman, has already reached career highs in points (20) and assists (17) in 40 games with the Silvertips this season, also earning a game winning goal and a +7 rating. He has suited up in 92 career games as a Silvertip in the WHL, earning 29 points (4g-25a) and a +18 rating while helping guide the Silvertips last season to their third straight U.S. Division title. In the WHL Playoffs, he has scored a goal and registered a +4 rating in 10 games. He was selected by the Silvertips in the first round (20th overall) in the 2017 WHL Draft. 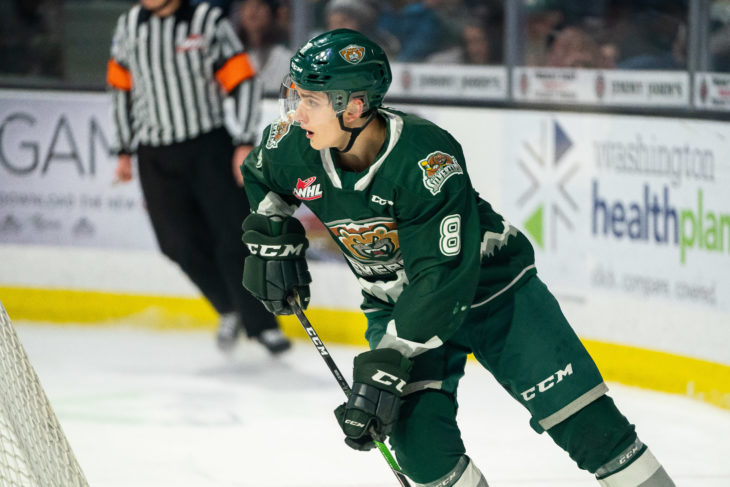 The Olds, Alberta native also represented Canada at the World U17 Hockey Challenge last season and was selected in the first round (20th overall) by the Silvertips in the 2017 WHL Draft. In 2017-18 with the Lethbridge Hurricanes Midget AAA program (AMHL), he earned 26 assists in 30 games, ranking tied for third in points among all league blueliners. His 26 assists paced all Hurricanes defensemen and finished tied for the league lead in assists among defenseman. He also skated in five games at the WHL Cup with Team Alberta, earning three points (1g-2a) and a +5 rating in a silver medal finish.

Puutio, a 2002-born defenseman, ranks third among WHL rookie blueliners with 16 points (1g-15a) in 35 games, and was also tied for second on the Swift Current Broncos in power play assists (3). The native of Vaasa, Finland will skate (Team Red) in the 2020 Kubota CHL/NHL Top Prospects Game on Thursday in Hamilton, Ontario as one of 40 players across the Canadian Hockey League showcased as draft-eligible talent, organized by NHL Central Scouting. 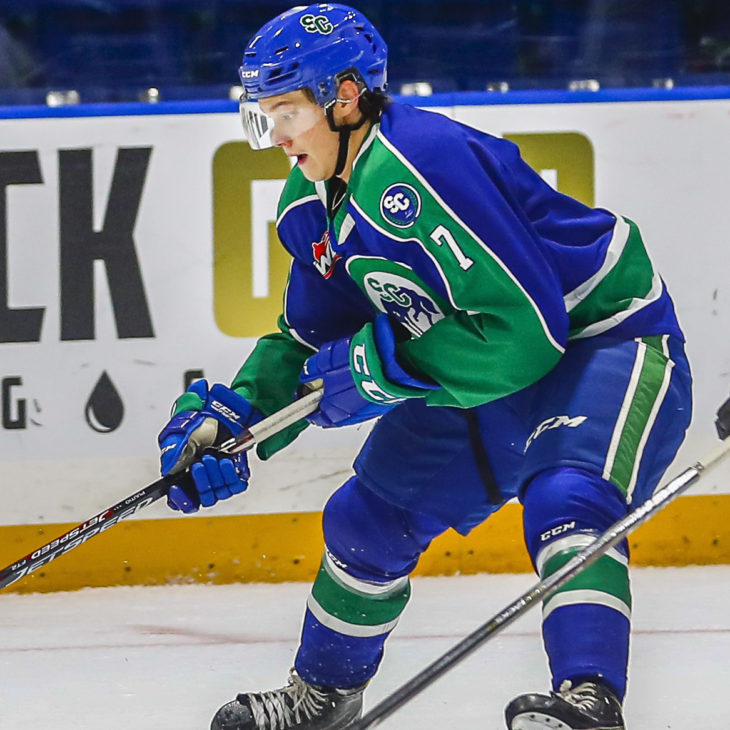 The 5-foot-11, 184-pound blue liner was selected first overall by Swift Current in the 2019 CHL Import Draft, previously helping the Kärpät U20 squad earn a league championship of the Jr. A SM-liiga division, posting a goal and three assists in 31 games. He also suited up for 10 games with the U18 Jr. B SM-sarja team, earning 12 points (4g-8a).

On the international stage, Puutio picked up four assists in six games at the World Under-17 Hockey Challenge in Quispamsis and Saint John, New Brunswick in 2018-19, helping Finland to a silver medal and notched three assists in three games for Finland at the Hlinka Gretzky Cup, shortly before this season.

UP NEXT: The Tips return to play at home Friday night, hosting the Kelowna Rockets at 7:35 p.m. for Hockey Happy Hour presented by Broad Stroke Associates and take on the Seattle Thunderbirds on Saturday, at 7:05 p.m. for Local Heroes Night presented by Wolfe Plumbing and Wolfe Fire Protection. Doors for both games will open at 6:00 p.m.