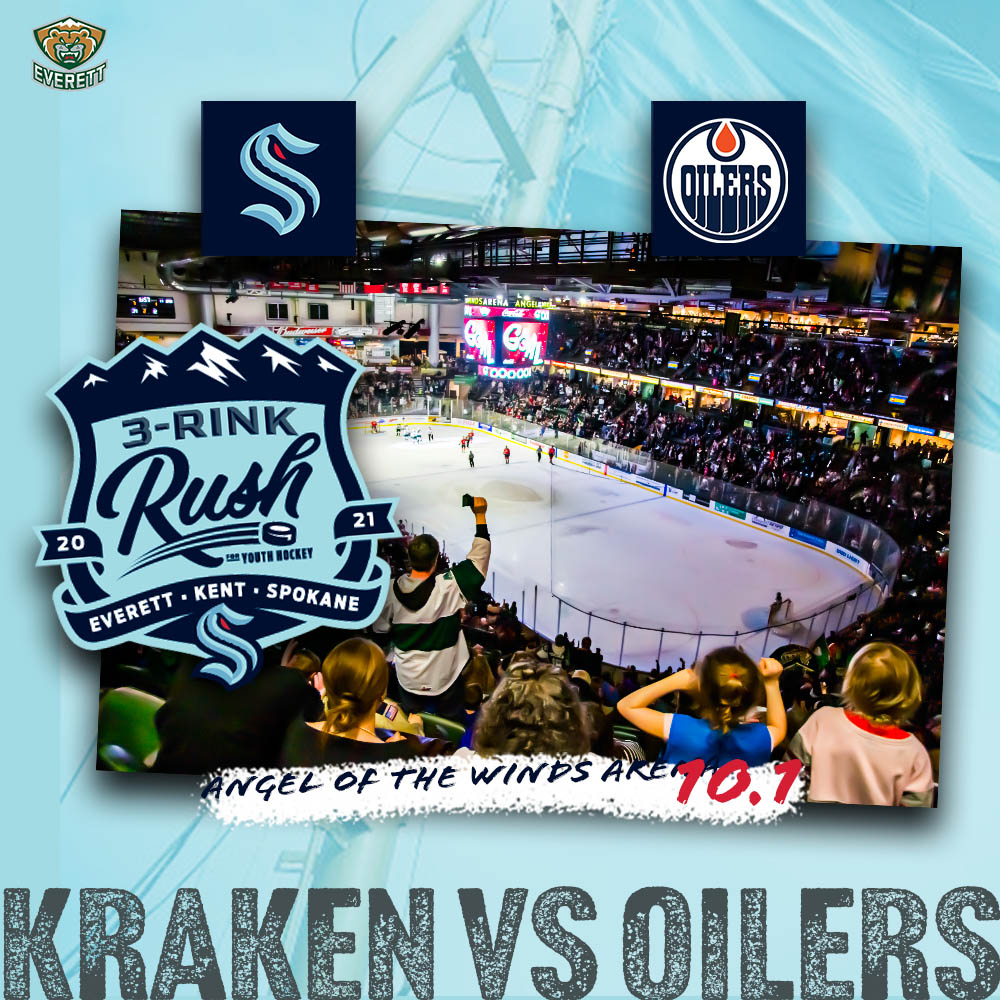 The Silvertips, Angel of the Winds Arena to Proudly Host NHL Pre-season Hockey Oct. 1 When the Seattle Kraken Face the Edmonton Oilers

Tickets for the Kraken and Oilers contest at Angel of the Winds Arena will be on sale starting Friday, July 16 with an exclusive pre-sale opportunity for Silvertips Season Ticket Holders open starting at 10:00 a.m. PT, on Tuesday, July 13 until 10:00 p.m. PT on Wednesday, July 14. Details for ticket purchase opportunities are as follows:

The Kraken will donate a portion of ticket revenue from the Oct. 1 contest and the Three Rink Rush for Youth Hockey tour to One Roof Foundation, with a goal of raising over $500,000 to expand youth access to hockey in connection with the Silvertips and fellow U.S. Division teams.

The Silvertips will host “Opening Night” for the home schedule in 2021-22 seven days later, Oct. 8 against Portland at 7:05pm, their first regular season home game opening the doors to fans since the coronavirus pandemic stopped the 2019-20 WHL season.

“It’s an amazing testimony to the growth of hockey in the Pacific Northwest when the Seattle Kraken have quickly unified the passion of our fan base and those of fellow WHL franchises for this incredible opportunity and the future of hockey in our state,” said Silvertips and Consolidated Sports Holdings chief operating officer Zoran Rajcic. “Angel of the Winds Arena in downtown Everett has become synonymous with the energetic and loyal core values of our fans, the infancy of future NHL and pro talent, and the surrounding ice for continued growth in youth hockey. From the moment the Kraken approached us with an opportunity to host NHL preseason hockey in our home, we felt it was a perfect match. We look forward to October 1, hosting the Kraken and Edmonton Oilers, and captivating young and old in the Puget Sound with a statement on our game’s present and future.”

“We are so grateful to the men and women who have worked tirelessly to build Climate Pledge Arena in the most extraordinary of circumstances and thank Mortenson and all the sub-contractors,” said Tod Leiweke, CEO of the Seattle Kraken. “The arena is on track to host our first regular season home game in mid-October, but we have made the decision to play our three inaugural pre-season games at three outstanding local arenas. This gives us an opportunity to partner with the WHL teams, celebrate hockey across our region and grow this beautiful game. We couldn’t be more excited for these games and then to open Climate Pledge Arena.”

“These games represent the opportunity to see our roster come together for the first time outside of training camp,” said Seattle Kraken General Manager, Ron Francis. “It will be an honor to play them in hockey communities across the state and I know our players will be excited.” 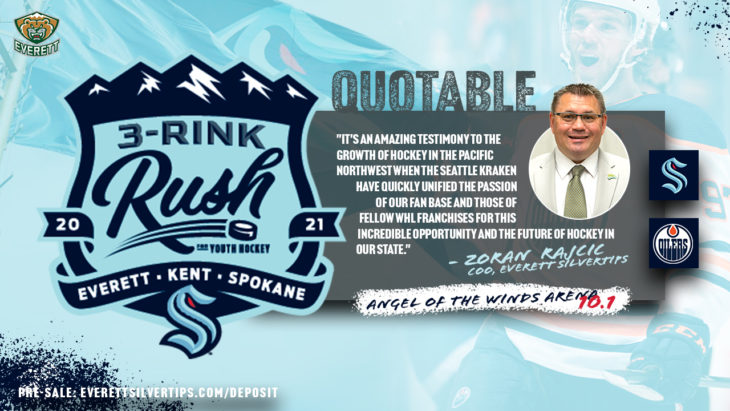 The Kraken, led by general manager Ron Francis and assistant general managers Ricky Olczyk and Jason Botterill, will participate in the NHL Expansion Draft on July 21 and in their first NHL Entry Draft on July 23-24, dropping the puck officially for their first NHL season in October after being granted expansion as the league’s 32nd franchise. Climate Pledge Arena, located 28 miles south of downtown Everett, will be the home to the Kraken starting in October. Dave Hakstol was named the first head coach in Kraken history on June 24, joined behind the bench with assistant coaches Jay Leach and Paul McFarland. The Kraken will compete in a six-game pre-season schedule, wrapping up Oct. 5 against the host Vancouver Canucks.

The Oilers, who have won five Stanley Cup titles with eight players elected to the Hockey Hall of Fame, feature forwards Connor McDavid and 2015 WHL Playoff MVP Leon Draisaitl, combining to win the Hart Memorial Trophy (league’s most valuable player) four times, the Art Ross Trophy (league leader in points) four times in the last five years, and have been named to play in the NHL All-Star Game a combined six times. Led behind the bench by head coach Dave Tippett, the Oilers last season finished second in the North Division with 72 points and reached the postseason for the second straight year.

Forward Jujhar Khaira, who delivered 43 points (16-g27a) in 59 games with the Silvertips in 2013-14 and has six seasons of NHL experience in Edmonton, is among additional players from last season’s rosters with notable WHL experience including:

To celebrate the home launch of Silvertips hockey for the 2021-22 season, “Select-A-Seat” is underway, hosted in a virtual format. Phone call appointments have been scheduled for renewed accounts interested in new seating arrangements, and new season ticket and mini plan accounts will finalize arrangements through July 9. Fans will have one-on-one attention with a Silvertips ticket sales representative, and first right of refusal for account options for the 2021-22 season. More information on securing a Silvertips ticket package is available at www.everettsilvertips.com/tickets or by calling (425) 252-5100. Further details on signature event nights such as Pink The Rink, Local Heroes, Teddy Bear Toss, Navy Night and more will be announced soon.

The Silvertips will open the 2021-22 pre-season on Friday, Sept. 10 as part of the annual Silvertips Preseason Classic in downtown Everett, 6:00 p.m. against the Spokane Chiefs and their 19th season in the WHL and defense of their eighth U.S. Division title on Saturday, Oct. 2 against the host Kelowna Rockets.