Noah Juulsen: 18th Silvertip to Play in the NHL 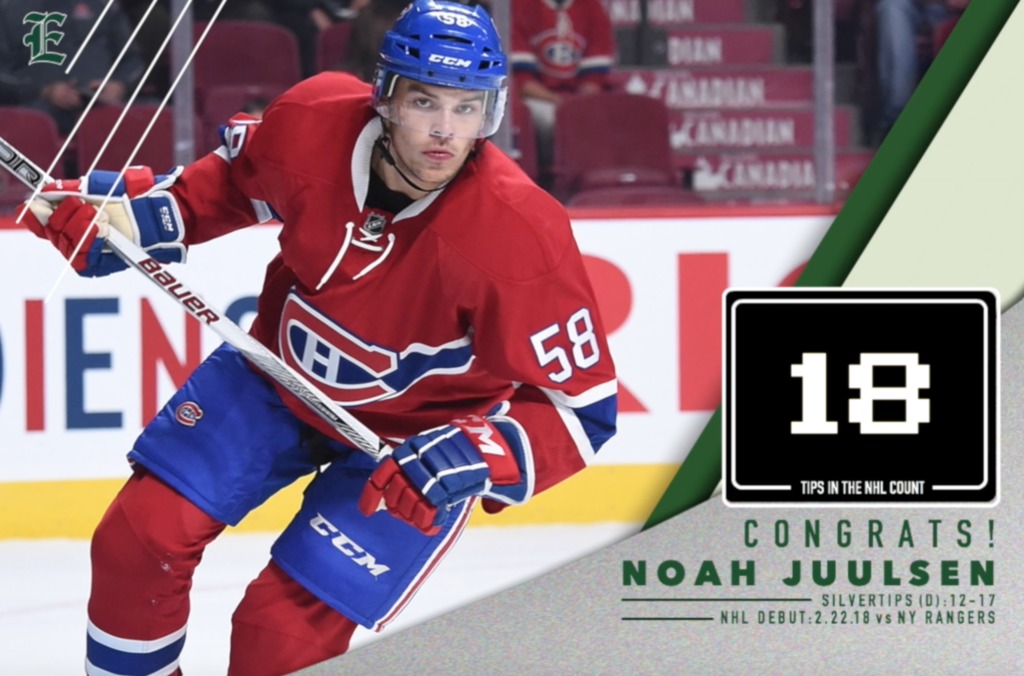 EVERETT, Wash. – Defenseman Noah Juulsen last season’s captain who helped guide the Everett Silvertips of the Western Hockey League to a pair of U.S. Division titles, became the 18th player to suit up and play in the National Hockey League after skating for the Silvertips, as his Montreal Canadiens defeated the New York Rangers, 3-1, on Thursday night at Bell Centre in Montreal.

Juulsen, 20, finished with a plus-2 rating, four hits, a pair of shots on goal and one blocked shot in 17:14 of ice time with the Canadiens. He was selected by Montreal in the first round (26th overall) of the 2015 NHL Entry Draft.

The native of Abbotsford, British Columbia is second all-time with the Silvertips in plus-minus (+48) entering this season, and had 124 points and 149 penalty minutes in 240 career WHL games, all with the Silvertips. He added five assists in 25 career postseason games and last season was named the 13th captain in Silvertips history, en route to WHL First Team All-Star (West) honors with 12 goals and 34 points in 49 regular season games.

Juulsen was also captain for Team WHL at the Canada Russia Series with a goal in two games and had a pair of assists and +4 rating in seven games for Team Canada last season at the World Junior Championships, en route to a silver medal.

“I’ve known him for a few years now, and that’s what you’d expect. He’s a guy who’s going to be really good playing for this hockey team for a long time.”
-Brendan Gallagher on Noah Juulsen
🎙➡️ https://t.co/Iprhaw8ALz #GoHabsGo

This year, Juulsen additionally has a goal and five assists in 31 games in the American Hockey League with the Laval Rocket.