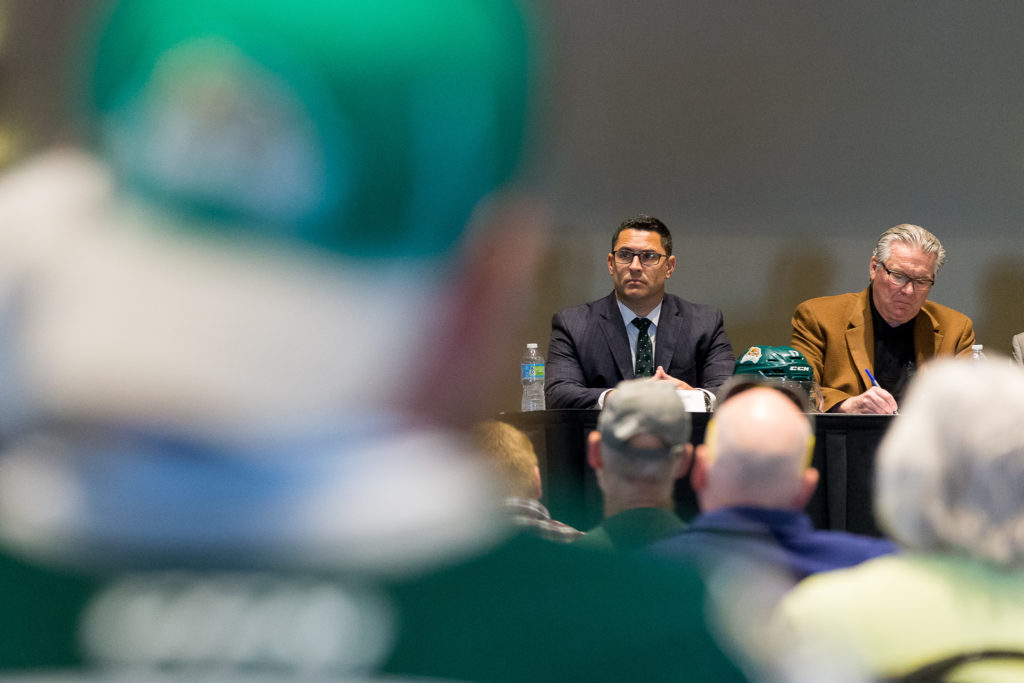 That change led to a season many are calling the greatest, to date, in franchise history.

Dennis Williams ascended the podium in downtown Everett, not too long after in a written statement vowing to “uphold the culture of success.”

In just one year, he reached that goal and surpassed many benchmarks.

The 38-year old from Stratford, Ontario, who built significant strides in programs outfitted in Bloomington (USHL) and Amarillo (NAHL), constructed one of the signature seasons in Silvertips history, if not the most bold-faced one to date, with continuity of success. The Silvertips won their second straight U.S. Division title, third in four seasons, and sixth in franchise history.

This was after they began the season 4-9-1, a record that stood shortly before Halloween.

From there, Williams’ Silvertips won 37 of 48 games, rallied to take over first place by Christmas, and were routinely ranked in the CHL Top 10 in the second half of the regular season.  They were just getting started.

They set a franchise record with 246 goals.

He set a new Silvertips record for most wins by a first year head coach in franchise history (47).

You think scoring goals is fun? You think watching a team scoring eight goals in a game is fun? The Tips this season did it five times – including on Dec. 27 when they beat Vancouver, 11-0 to shatter multiple single game Tips records.

By the end of the regular season, Williams was anointed WHL Western Conference Coach of the Year.

Also, a look below at the jump the top six full-season goal scorers on the Silvertips, and their goal and point production increase from last season:

Defensively: no lapses. Under Williams and assistant coach Mitch Love, the Tips led the league again in fewest goals allowed while Carter Hart – some arguing on his way to becoming the greatest goaltender in WHL history – suppressed opponents into a WHL record tying 26 shutouts and league best .947 save percentage, en route to the Four Broncos Memorial Trophy and third straight Del Wilson Memorial Trophy as well.

Hart’s young backup, 16-year old Dustin Wolf, exploded onto the scene to earn CHL Goaltender of the Week shortly after winning his career debut, log four shutouts, and even four assists in just 16 games, spelling Hart due to rest or the World Junior Championship.

All of this happened under Williams’ watchful eye.

The Tips weren’t done there. A pattern lasting 12 years of second round and done, or earlier: erased. They earned their second Western Conference title in franchise history in historic come-from-behind fashion in Game 6, down 5-2, and got to within two victories of the Ed Chynoweth Cup. It turned into the deepest playoff run in Tips history to date.

In total, Williams’ win percentage over the last eight seasons, counting time behind the bench in the Western Hockey League, USHL, and NAHL:

And one year ago today, it all started with a simple, “hello.”