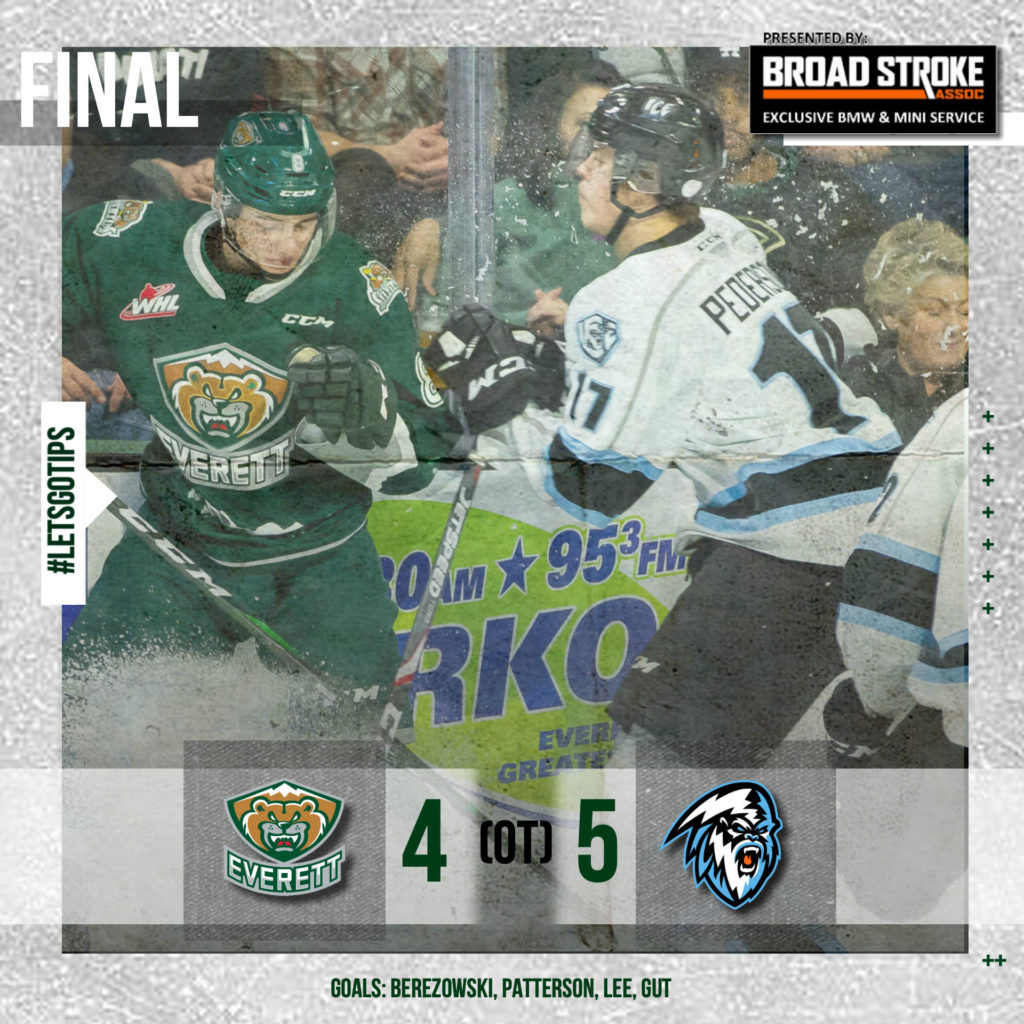 EVERETT, Wash. – Chase Hartje capped a three-goal rally 39 seconds in as the Winnipeg ICE outlasted the Everett Silvertips, 5-4 in sudden death overtime before 7,017 fans at Angel of the Winds Arena in downtown Everett on Saturday in WHL action.

The Tips climbed out of a 2-0 first period deficit to claim a point for the 10th time in the previous 11 games and earned multi point outings from Jackson Berezowski, Michal Gut, and Brendan Lee. Nino Kinder forced overtime with 40.6 seconds left in regulation.

UP NEXT: The Tips return to play in a bounce-back effort on Sunday at home, 4:05pm (KRKO / WHL Live) against the Spokane Chiefs in downtown Everett. Tickets are on sale now, including the Undie Sunday promotion presented by E.S.C. Mattress Center, available at the link below with doors opening at 3pm.

Winnipeg built a 2-0 lead just 5:01 into the game, first when Cole Muir finished a missed point shot rebound off the backboards at 4:32 and on the next shift, Logan Danis’ first career WHL goal came just 29 seconds later when he capitalized at the right post.

Right away, the Tips got to work responding. Jackson Berezowski beat Jesse Makaj off the rush with a snap shot at the right circle, 7:42 into the game, and Max Patterson tied it up at 8:59, finishing a magnificent tic-tac-toe set-up with Justyn Gurney on a two-on-one break at the right circle.

Just 1:57 into the second period, the Tips kept momentum going when Michal Gut slipped a pass to Brendan Lee behind the defense, who roofed a backhander under the crossbar for his fourth goal of the season. Gut then hammered a one-timer past Makaj off the rush with 5:37 left in the second, and the Tips were rolling with a 4-2 advantage.

Missed opportunities paved the way for Winnipeg to get back in the game and Jackson Leppard’s snap shot at 7:58 from the right circle sliced the Tips lead to a goal. Then with Makaj to the bench for an extra attacker, Isaac Johnson skated down the right wing and centered for Kinder, finishing his eighth goal of the season with 40.6 left to lock the score at 4-4.

Johnson’s miss at the net in overtime, opened a rebound for Hartje’s winner, a tap-in at the right post.

NOTES: Scratched from the lineup were Braden Holt (healthy), Dawson Butt (three-game suspension), Tyson Phare (injury),  and Dylan Anderson (healthy) … Fonstad’s assist gave him nine points in six games since joining the Tips lineup and assists in eight consecutive games … Muir’s goal ended a Tips home shutout streak over the ICE of 124:32 and was team’s first goal since an overtime winner in downtown Everett in the 2014-15 season … the Tips kept a two-point pace over Portland for first place in the U.S. Division.