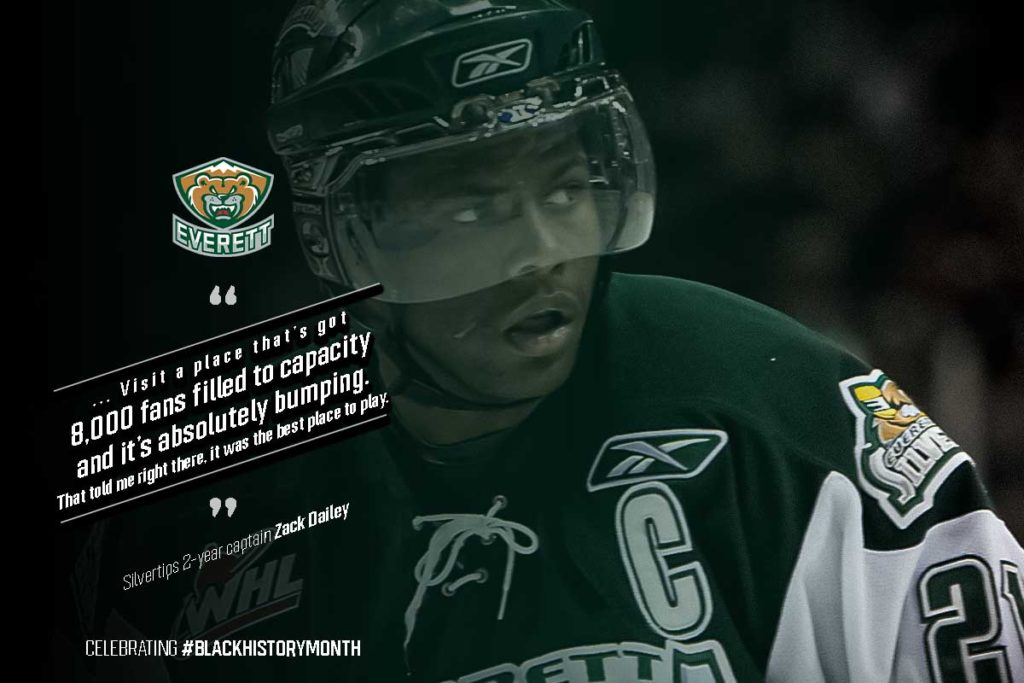 To be honest, as a smaller player, I was told in my first Silvertips training camp, 2004, they didn’t see me playing here until I was 18 years old.

Hey, they were just being honest and I appreciated that. But at that point, I had work to do.

So, the next year I played midget and eventually worked into some games in the AJHL. Throughout that year, the Silvertips and I kept in touch and they called me up to visit Everett for a while.

I told them I hadn’t decided about committing until I saw a game against the Seattle Thunderbirds.

Go ahead. Walk into downtown Everett for the first time to a sellout crowd. It’s unbelievable.

Picture yourself a kid who’s playing midget hockey in front of usually 30 people – and most were parents in the stands – then then visit a place that’s got 8,000 fans filled to capacity and it’s absolutely bumping.

That told me right there, it was the best place to play.

So, a shout out to all the fans who made my decision easy.

About Shane Harper when I got there: he was a really fun person to have on your side. Just to share experiences of being young, away from family for the first time, answering to a new coach and maybe not playing a lot off the bat – that’s a lot for a young guy to take in for the first time. Shane, or “Harps” as we called him, was someone who kept the energy up and the mood light. He was helpful.

Being together (as a teammate) for those first eight months, then five years, it’ll grow a friendship for sure.

Kyle Beach and Harps made me laugh. Jokers. Pranksters.

As you’re younger and your role on the team isn’t as big as others, there was more time to have fun. That first year and second year, we had unbelievable teams. Kyle was counted on in his first year to supply offense. Shane and I weren’t. So, we discovered ways to make it fun until the time came to fill bigger roles. Those guys were at my wedding. Shane was a groomsman.

We had some moments. We had funny ones. Maybe I’ll share those later.

Harps and I grew up all the way to becoming 20 year old’s on an 2009-10 team that was so special: and there are a bunch of reasons.

That group, for the most part, stuck together for years. We had a nucleus that had been together awhile. Our final year, I was roommates with Shane. Pretty solid deal.

We had great veterans. Chris Langkow came aboard at the start of the season and is now in his 11th year of pro hockey. Ryan Murray was with us the previous season as a 15-year old in the playoffs and running our power play.

So, we knew he was going to be good.

We also had this “wild card” … Radko Gudas.

You know how as an NHL vet, Radko hits hard. He wasn’t shy back then either. In training camp, he was absolutely running over Shane Harper. Needless to say, I was lucky enough to be on Radko’s team. Eventually, Harps had enough, and comes over to ask me:

“Hey, can you tell this guy to stop hitting me?”

So, I remember going to Gudie and saying, “hey, just so you know, that’s our best player.”

That’s just who he was. He didn’t care who you were on the ice, he was going out to compete hard. Get out of his way.

But he brought out the compete in our entire team.

As a whole, we had so much fun together. We had our struggles right around Christmas and a tough December. Our head coach back then, Craig Hartsburg, put all 20 year-olds on the same line: me, Harps, and Langkow.

We went on a 14-game heater after that.

The second half was so much fun going on that win streak and it was a great time to be a part of it.

My billets made the time great, too. The first year I lived with Pat and Dick Jones who functioned as the billet coordinators. They treated us great. I wanted to live a little closer to the rink and school though after that year, so we made arrangements to accommodate the request.

My second year, I moved in with Mike and Mary Fisher. The moment I got there and introduced myself, I put my hand out to shake Mary’s hand.

She quickly replies, “oh we don’t shake hands here, we hug in this family,” and gave me a huge hug the first time meeting her. I knew I was going to fit in great.

They treated me like a part of the family. They had a son and daughter, so I had my “setting-a-good-example-hat” on at all times. It definitely made me think about my actions especially being around 10 and 13 year old kids.

It was cool seeing them grow up, and coming to me for advice at times which was a fun role to play because I had never been a big brother before. It was cool being involved and making a difference in their lives. They came to my wedding and it feels like they’ve been a part of my family forever.

You never forget the up-close and personal interaction with some of the greatest fans in the world. I remember the scrapbook reveal parties with billets and booster club members: their hard work, memories, and pictures that you’ll never forget on the ice, created fun explaining what was going through your head when the picture was taken.

Parents weekend was pretty special. One year I got my aunt, uncle, and cousins out there. It created very fond memories.

I loved going to school visits. It was fun interacting with young kids who were learning about hockey and us, and helping get kids involved in the game. We visited Imagine Children’s Museum in downtown Everett a few times and brought sticks and nets to play with kids for an hour each time.

That was cool. They brought a new kind of energy and excitement.

Everett did a lot of great stuff for the players, and I was fortunate to be a part of it.

Coming Sunday: Part 3, the life today, and the future.