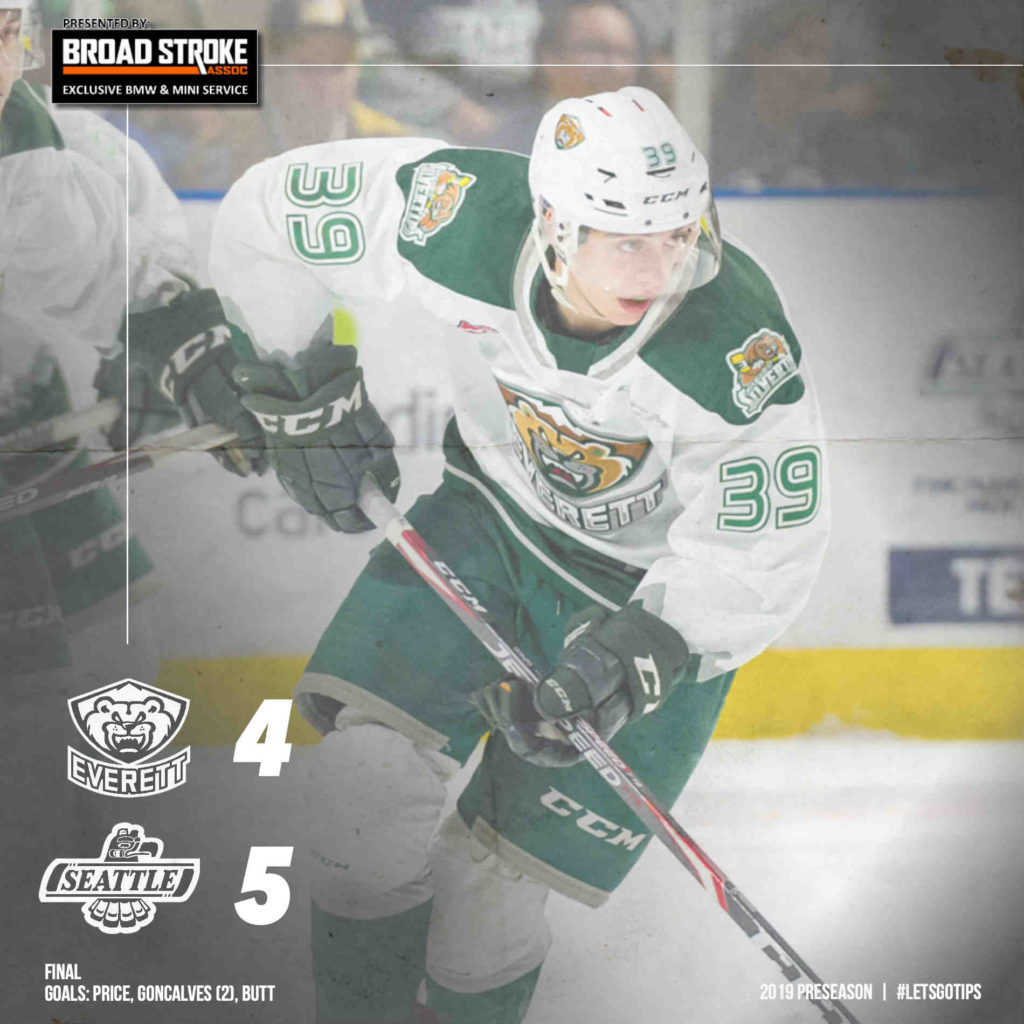 KENT, Wash. – Gage Goncalves scored a pair of goals and added an assist, in a comeback that just fell short as the Everett Silvertips dropped a 5-4 defeat to the Seattle Thunderbirds in the pre-season finale, Tuesday night at accesso ShoWare Center.

The Tips, who trailed 5-2 with less than six minutes left, scored twice in a span of 2:54 and nearly tied the game in the last minute of regulation on an extra attacker situation. Alex Morozoff, making his pre-season debut, scored two goals for Seattle while Tips goaltender Keegan Karki stopped all 13 shots faced in over 29 minutes.

Karki, made three appearances in net, ended the pre-season on a shutout streak of 92:17.

Jalen Price buried a snap shot of the rush with 5.1 seconds left in the first period for a 1-0 lead and the Tips carried the lead into the latter half of the second period. Seattle came back with four unanswered goals in 9:42, taking a 4-1 lead by the end of the second. Morozoff scored on a snap shot off the rush with 9:20 left, then Owen Williams followed on a delayed penalty with a snap shot from the left circle with 5:56 left.

Morozoff buried his second of the game with 36 seconds left in the period and Andrej Kukuca’s screen at the net put the Silvertips in a 4-1 hole with 18 seconds remaining.

Goncalves brought the Tips to within two goals on a third period power play goal with 18:30 left in the period, but Brendan Williamson’s third goal of the preseason, from the right circle, bumped the Thunderbirds lead to 5-2 with 5:09 elapsed.

Dawson Butt converted his first of the pre-season with 4:44 left in regulation, slipping a snap shot through Blake Lyda’s five hole to bring the Tips to within two goals. With backup goaltender Braden Holt pulled for an extra attacker on a power play, Butt worked the puck across to a wide open Goncalves at the right circle. Goncalves uncorked a snap shot for his second goal of the night at 18:10, but the Tips fell short in the final minute while buzzing around the Thunderbird net.

Lyda worked the whole game on the Seattle side with 27 saves.

The Silvertips officially launch the 2019-20 season with Opening Night, presented by Lamoureux Real Estate and SoundTransit (magnetic schedule giveaway) on Sept. 20 vs. Tri-City at 7:35 p.m. and finish the weekend the following night against the Royals, 7:05 p.m. with both games set for Angel of the Winds Arena in downtown Everett.