RECAP » A Battle to the End 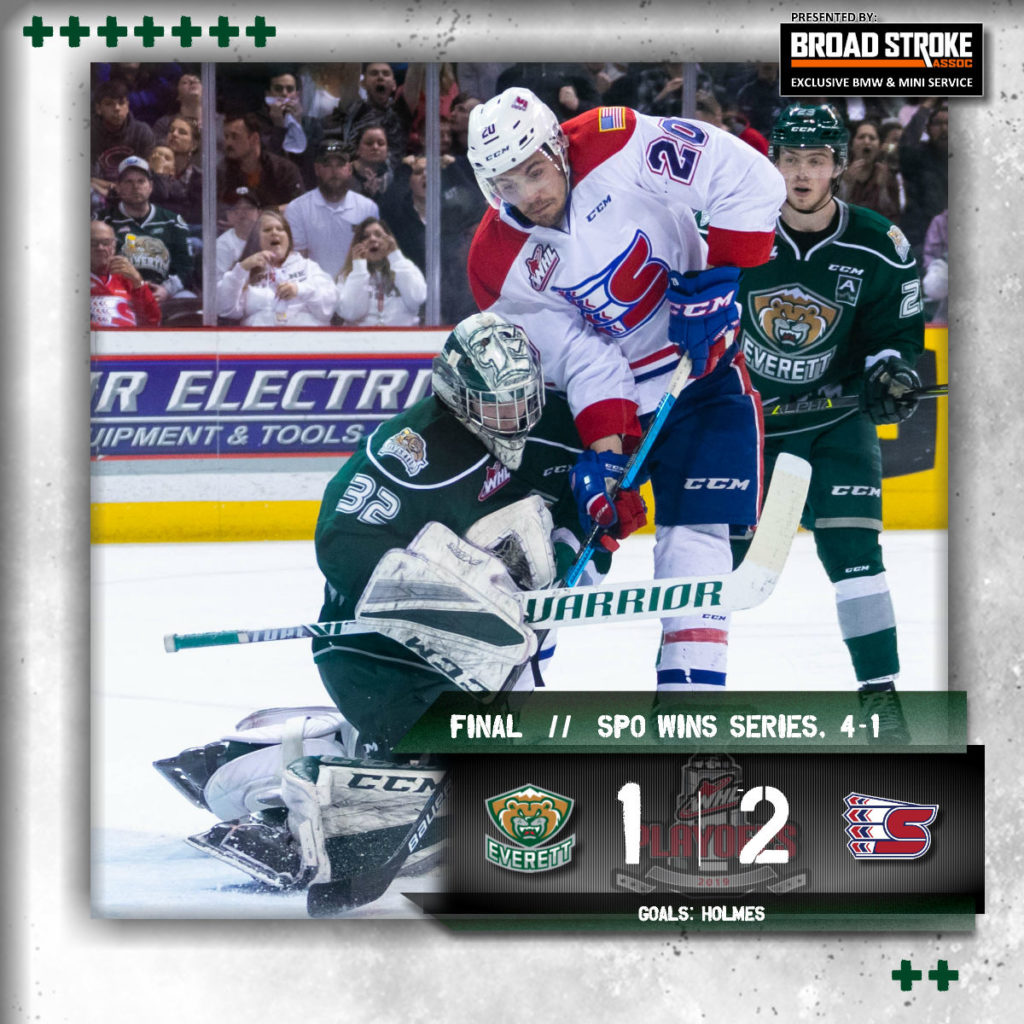 SPOKANE, Wash.— Bailey Brkin capped a 34 save effort with several saves in the final two minutes of a penalty kill, helping the Spokane Chiefs sneak past the Everett Silvertips, 2-1 in Game 5 of the second round and win the series 4-1, advancing to the Western Conference Championship Series before 4,027 fans at Spokane Arena on Saturday.

The Silvertips ended their 2018-19 season, which included their seventh U.S. Division banner and fourth consecutive trip to the second ruond, with a Robbie Holmes goal in the first two minutes of play and 19 saves out of Dustin Wolf. Spokane’s series win sets up a Conference Finals series with the Vancouver Giants.

Three of the five games in the series were decided by two goals (both via empty netters) or less.

The Silvertips took a big step from the start to perhaps force a Game 6 in downtown Everett after Holmes ripped a snap shot from the left circle and off the rush past Brkin, just 1:32 into the game for a 1-0 lead. Holmes picked up his fourth goal of the postseason and extended his goal scoring streak to three straight games.

For the second time in as many games, Robbie Holmes opens the scoring! The @WHLsilvertips are on the board first!#EVTvsSPO | #WHLPlayoffs pic.twitter.com/GtkRAix5QZ

The Tips owned a 5-1 lead in shots early in the game, but the first period took a wild turn toward the halfway point. Matt LeDuc delivered a check to the face of Connor Dewar, who would miss the next six minutes for medical attention and after the hit, Riley Sutter engaged LeDuc in a fight at the left circle.

Out of the scrap, no penalties were delivered to Spokane, and the Silvertips absorbed a two minute minor for instigating.

Nolan Reid took advantage with a power play from the left point, ten minutes into the period, when his one-timer deflected off traffic and changed angles past Wolf’s toe.

Wolf came back with a big save late in the period to keep the game tied by the end of the first period. But the Silvertips, who controlled tempo at even strength for the game, had to overcome penalty issues early in the second period and Riley Woods put Spokane up 2-1 at 5:24 on a backdoor one-timer at the right circle.

The Tips stabilized the remainder of the second period and outshot Spokane 13-5, but were only just beginning. They roared back in the third period to outshoot the Chiefs, 16-4 and continuously hemmed Spokane in their own zone. Brkin held the lead on a pair of big saves halfway through the period, while the Tips narrowly missed a tie game when Riley Sutter attempted to swat the puck out of the air to a half open net.

Spokane, who played a majority of the game penalty free, then fell down a man with less than four minutes left in regulation on a Luc Smith cross check to Gianni Fairbrother in the corner, ending up in a Silvertips double-minor power play.

Brkin cleaned up a snap shot by Dewar through traffic and Spokane misfired on a pair of empty net bids, including a diving break-up by Jake Christiansen. The Tips stormed back in the final 40 seconds and swarmed the Chiefs net for the game-tying goal, but one final clearing attempt with five seconds left sealed the series.

NOTES: Silvertips scratches included Dawson Butt, Dylan Anderson, Jalen Price, Conrad Mitchell and Justyn Gurney … the Tips led the game in shots 35-21, and were outshot just once in the postseason (Game 4 on Friday night) … Bryce Kindopp finished as the Silvertips points leader in the playoffs (11), and Andrusiak finished as the Tips postseason leader in goals (6).