RECAP » A Kehler Crowd Out 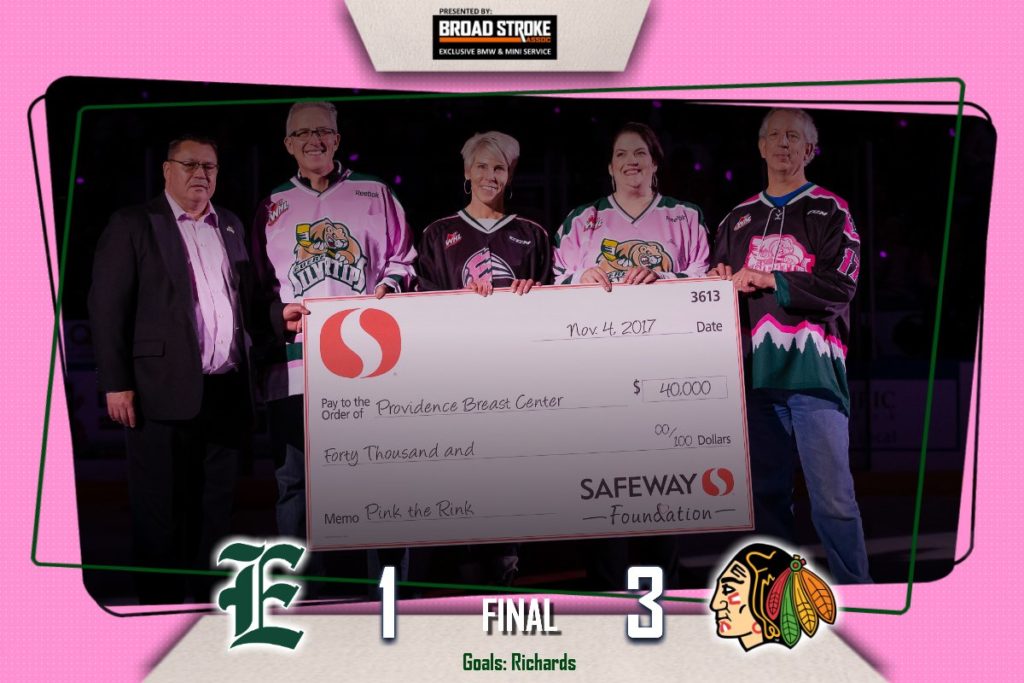 EVERETT, Wash. – Alex Overheard broke a 1-1 tie with his eventual game winning goal in the third period and Cole Kehler turned away 41 shots for first star honors, helping the Portland Winterhawks get by the Everett Silvertips, 3-1 before 7,887 fans at XFINITY Arena on Saturday in WHL action.

With the Tips suiting up in their ninth annual Pink the Rink game which raised over 67,000 in proceeds to benefit breast cancer prevention and treatment, Sean Richards scored the only Silvertips goal while Carter Hart followed up Friday’s 23-save performance to keep the Tips in the thick of the game with 39 stops.

The game started with lots of end to end action and was ultimately a battle of the goaltenders as both put on an impressive show. The Silvertips got the first power play of the evening as Glass got a four minute double minor for high sticking. Kieffer Bellows opened up the scoring for the Hawks as a misplay behind the net led Skyler McKenzie’s successful centering pass at 16:40, making it 1-0 Hawks.

The crowd was energized by a fight between Montana Onyebuchi and John Ludvig at the 7:57 mark in the second period; both players received five minutes for fighting. Everett got their second power play of the evening as Sharp went off for hooking at 10:11. Kehler remained sharp and the score remained 1-0. Joachim Blichfeld went off at 16:36 for slashing and although the Tips power play had a lot of chances, the score remained 1-0.

The third started off with a big tying goal from Sean Richards, setting a screen on Jake Christiansen’s point shot at 1:06 as it sneaked past Kehler, making it 1-1. With the Tips cruising off momentum, Kehler composed himself and stood tall throughout the remainder of the game.

Portland got the eventual winner at 9:05 from Alex Overheard, tucking in a loose puck from a battle near the Tips’ net for a 2-1 lead. The Tips had another crack on the power play at 13:03 as Keoni Texiera went off for interference but despite lots of shots, could not get the game tying goal.

Skyler McKenzie wrapped up the scoring with an empty netter behind the Silvertips defense at 18:49.