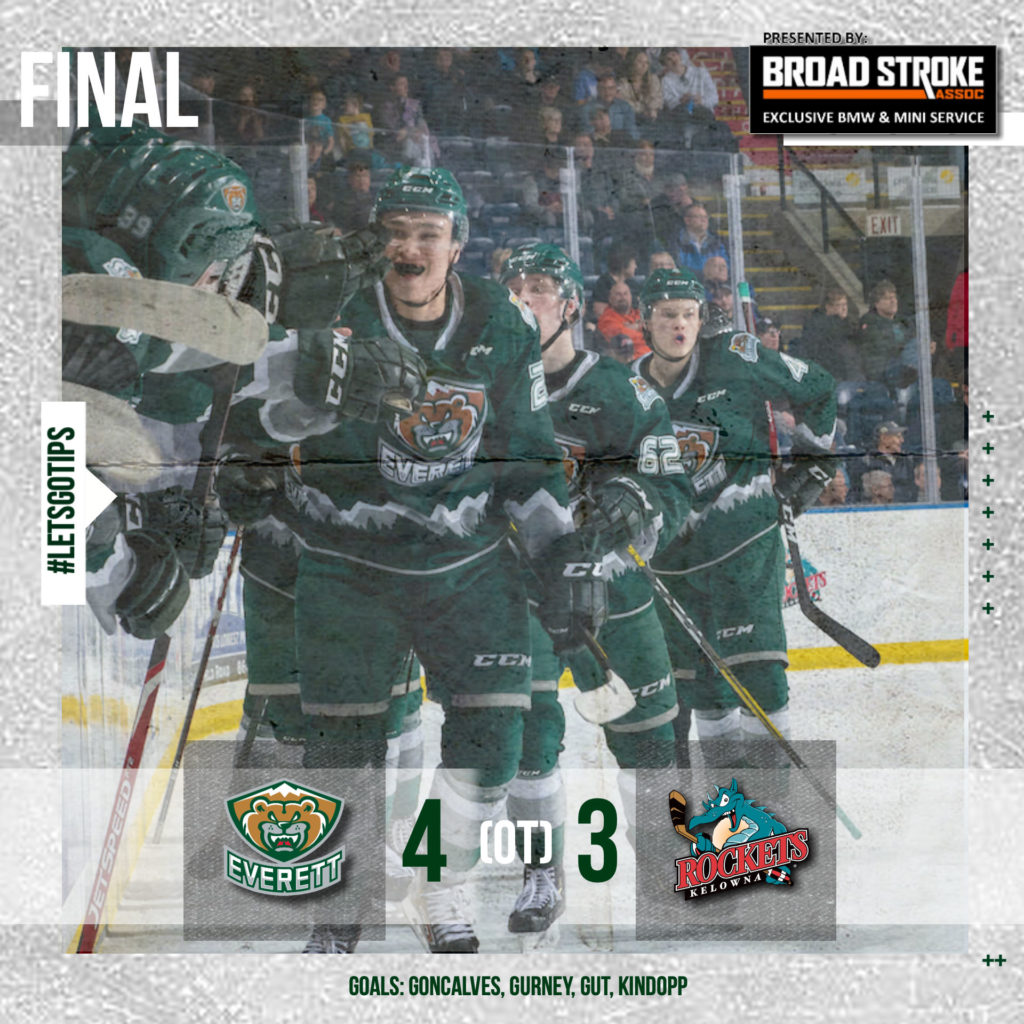 KELOWNA, British Columbia – On the first night of a back to back, the Everett Silvertips found themselves in Kelowna for their third meeting of the season with the Kelowna Rockets. With Bryce Kindopp scoring the winning goal in overtime, his 11th of the season and 37th overall, Everett finished with a 4-3 victory against Kelowna in front of 5,215 fans at Prospera Place.

Gage Goncalves, Justyn Gurney, and Michal Gut supplied the Silvertips offense in regulation, while the Silvertips shook off a two goal rally by Kelowna in the final 10 minutes including a game tying, extra attacker goal by Conner McDonald with 19 seconds left in regulation. The Tips earned their eighth straight win, a season high, and stayed within one point of first place in the U.S. Division after Portland defeated Tri-City, 3-1.

UP NEXT: The TIps are back home Saturday, February 29th for the final meeting of the season with the Kelowna Rockets. It’s Chick Fil A Fan 4 Pack Night so you can get 4 tickets and 4 Chik Fil A sandwiches starting at $56. Game time for Saturday’s night contest is 7:05 pm and the doors open at 6:05 pm.

Everett started scoring as Gage Goncalves scored his 32nd of the season just 2:55 into the first period. Goncalves, with assists from Cole Fonstad and Jake Christiansen, has recorded four goals in his last three games and put Everett ahead first for the third straight game. The Silvertips penalty kill was flawless in the opening twenty minutes as they killed off three Kelowna power plays to keep it a 1-0 Everett lead after the first period.

The Rockets would get on the board in the second period as Elias Carmichael put home his second goal of the season at 12:44 to make it a 1-1 game. With assists from Jake Poole and Kyle Topping, Carmichael’s goal made it a brand new game as Kelowna found new life. It didn’t last long as Justyn Gurney put Everett in front once again at 17:32, sneaking the puck past Kelowna netminder Ronan Basran to make it 2-1 Everett. It’s Gurney’s second straight game with a point and the Silvertips found themselves ahead 2-1 after forty minutes of play.

Michal Gut would score the first goal at the 8:26 mark in the third period, giving the Silvertips a 3-1 advantage. 1:22 later, Rockets forward Mark Liwiski cut Everett’s lead to one to make it 3-2 Silvertips. Then, after a Justyn Gurney hooking penalty, McDonald scored at 19:40 into the third on the power play for the Rockets to tie it at three and send it to overtime.

In OT, Kaedan Korczak’s interference penalty at the end of the third period proved costly – the Tips top ranked power play put the game away. Bryce Kindopp scored the winning goal 49 seconds on a rebound at the net, set up by Wyatte Wylie’s bullet pass from the left circle.

Michal Gut took home the first star of the night as he had one goal and one assist. The second star went to Kelowna goalie Ronan Basran, who stopped 31 of 35 Everett shots on the night. Taking home the third-star honors was Rockets forward Mark Liwiski, who had a goal and assist for his first two-point night since November 20th.

GAME NOTES: Scratched from tonight’s game were Hunter Campbell, Gianni Fairbrother, and Aidan Sutter… Bryce Kindopp now has 37 goals this season, which ties him with Portland’s Seth Jarvis for third in the WHL… With two assists tonight, Cole Fonstad now has 57 assists this season, which is the best in the WHL… Kindopp’s goal tied him with Tyler Maxwell for second all time in Tips history with 107 goals … the Tips moved to 2-1-0-0 this year against Kelowna.