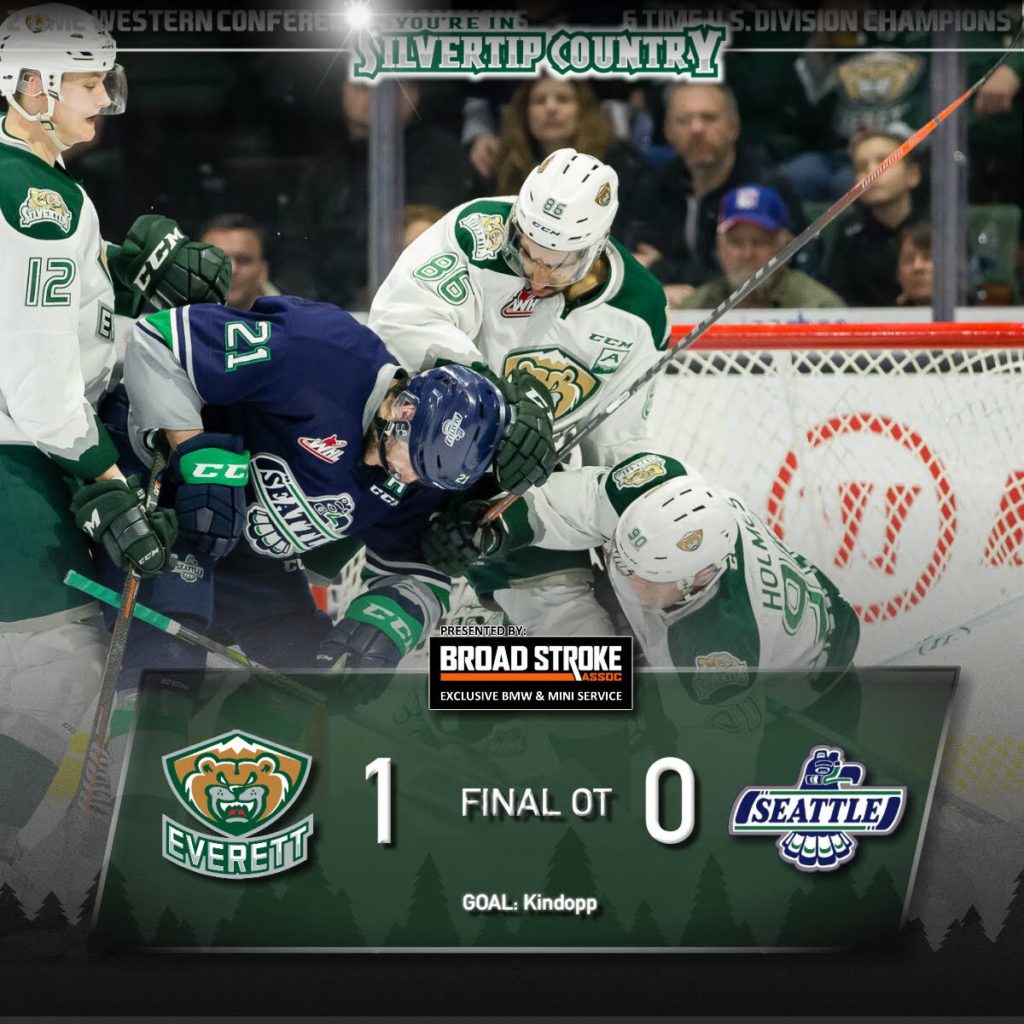 EVERETT, Wash. – Bryce Kindopp scored his second consecutive late game winner with 0.4 remaining to lift the Everett Silvertips to a thrilling 1-0 overtime victory over the Seattle Thunderbirds, in WHL action before a sellout crowd of 8,387 on Saturday in downtown Everett.

The Silvertips clinched home ice advantage in the first round of the WHL Playoffs with the win and reduced their magic number to three points for the U.S. Division title. If Portland loses on Sunday in regulation at Kelowna, the Silvertips can clinch their third straight division banner by virtue of a tiebreaker.

Kindopp’s winner, his 10th this season, is tied for the league lead with Brayden Tracey and Tristan Langan of Moose Jaw. Dustin Wolf furnished a 32-save shutout, his 7th of the season, moving him into fourth place on the Tips all-time list with 11 shutouts (ahead of Austin Lotz).

UP NEXT: The Tips visit Spokane on Tuesday to open a five-game road trip at 7:05 p.m. (1380 AM / 95.3 FM / TuneIn App / WHL Live). The Tips will return home next for the regular season finale on March 16 vs. Victoria, 7:05 p.m. for Fan Appreciation Night. Tickets are on sale at www.everettsilvertips.com/tickets.

Both teams battled through a scoreless first period and the Tips opened up the game with seven of the first 10 shots, nearly going ahead 1-0 on a Dawson Butt deflection at the net that Roddy Ross (40 saves) turned away with a flaring glove stop.

Wolf turned in a highlight reel stop on Payton Mount in the second period, and the Tips maneuvered a tight-checking game with a 14-12 shots edge in the second period. The Silvertips had several chances thwarted at the net with blocked shots by Seattle, and narrowly missed a 1-0 lead as Zack Andrusiak missed a rolling puck, open at the net.

The tight-checking game spilled over into the third period and both teams dodged penalty issues in the final ten minutes, carrying the scoreless tie into overtime.

Seattle’s best chance was an Owen Williams snapshot that banged the crossbar, and the Silvertips capitalized on new life with less than 20 seconds left in regulation. They muscled for a loose puck into the slot, and Connor Dewar threaded a shot off Ross’ pads that Kindopp cleaned up at the goal mouth for the win, sending downtown Everett into delirium with the Tips’ 44th win of the season.

Friday: "Nothing could possibly top tonight."

The Tips moved to 7-1-1-1 in the season series over the Thunderbirds.

NOTES: Silvertips scratches included Martin Fasko-Rudas, Riley Sutter and Jalen Price… the Silvertips are 22-7-2-1 against U.S. Division opponents … Kindopp tied Andrusiak for the Silvertip lead in goals (38) … the Tips finished their four-game homestand at 3-0-1-0 … the two teams have one more meeting, Mar. 9 in Kent. 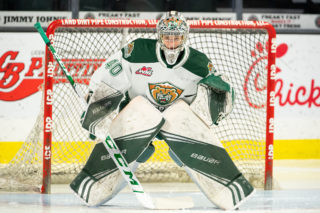