RECAP // Blazers Get Past Tips 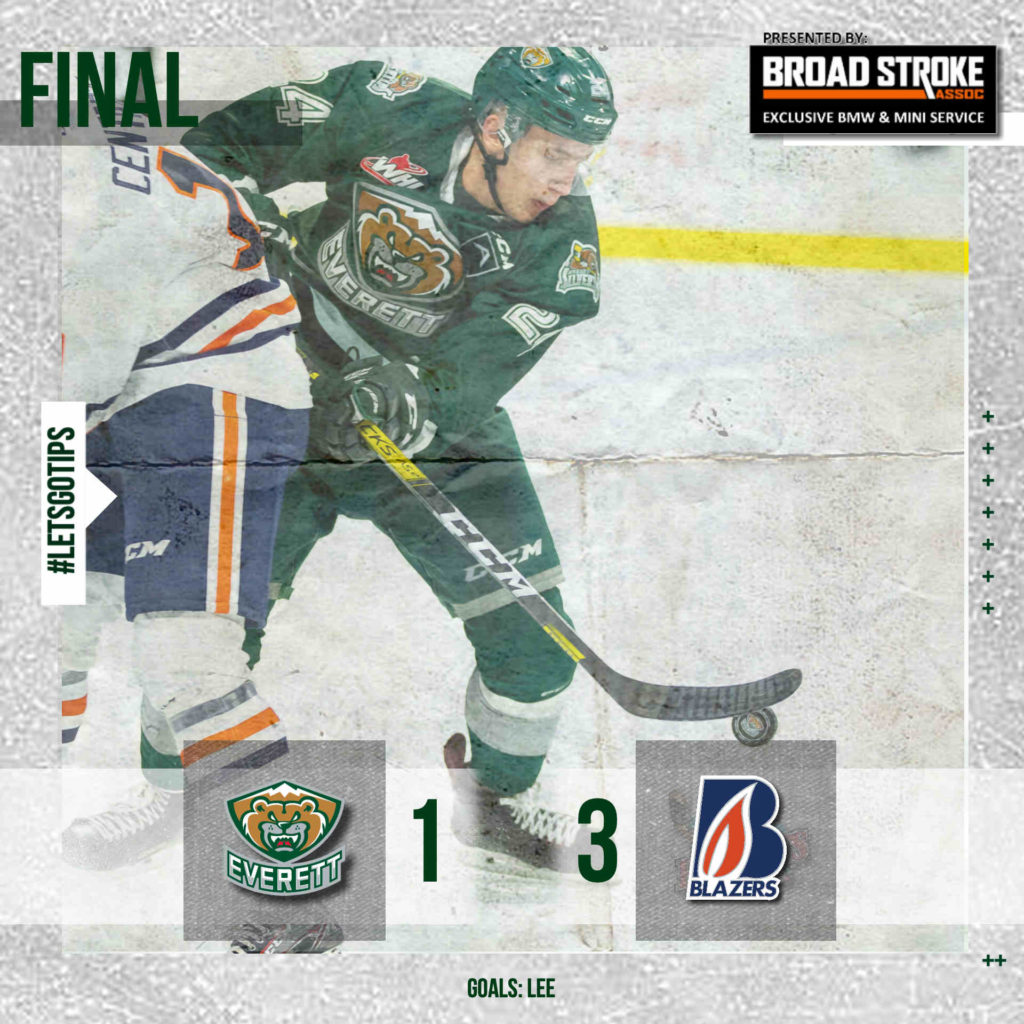 EVERETT, Wash. – Dylan Garand stopped 33 of 34 shots and Quinn Schmiemann’s go-ahead goal in the second period stood as the game winner to help lift the Kamloops Blazers over the Everett Silvertips, 3-1 before 3,571 fans at Angel of the Winds Arena on Friday night in WHL action.

Brendan Lee scored for the third consecutive game and Dustin Wolf made 36 stops (second star of the game), while the Tips fell to only 11-2-1 to Kamloops over the last five years. Jackson Berezowski’s assist gave him points in five of six games this season.

UP NEXT: The Tips continue the homestand tomorrow for the 10th annual Pink The Rink game presented by Safeway and Albertson’s, 7:05pm against the Seattle Thunderbirds at Ange of the Winds Arena. A large crowd is expected and limited tickets remain on sale at the link below, while six Silvertips authentic game-issued jerseys for Pink The Rink remain available for a “Buy It Now” pre-order option at www.everettsilvertips.com/pinktherinkjerseyauction.

The Silvertips generated an odd-man rush early in the first period and Max Patterson’s low shot to the net produced a rebound for Lee, scoring in his Silvertips home debut just 3:28 into the game for a 1-0 advantage. Reece Vitelli generated another grade-A look later in the period but Garand kept Kamloops down by a goal through 20 minutes.

Kamloops made their move with back-to-back goals less than seven minutes apart in the second period, beginning on Inaki Baragano’s first career WHL goal, off the rush at the right circle at 2:30 and followed by Schmiemann’s one timer from inside the blueline with 9:05 elapsed.

Garand and Wolf traded difficult saves through the second period and the Tips nearly tied the game on a half open net bid, but Patterson’s rebound opportunity was foiled by a sprawling save by Garand.

Connor Zary sealed the game on an empty netter at 19:09 of the third period.

NOTES: Scratched from the lineup were Braden Holt, Martin Fasko-Rudas, Conrad Mitchell, Gage Goncalves, and Jack Lambert … the Silvertips earned the edge at the face-off circle, 39-34 over Kamloops and Michal Gut went 17-of-28 to lead the Tips …. Dawson Butt fought former teammate Montana Onyebuchi with 3:53 left in the second period … the Tips played in their first home game in 18 days, returning for the first time since a 6-0 win over Victoria on Sept. 21.