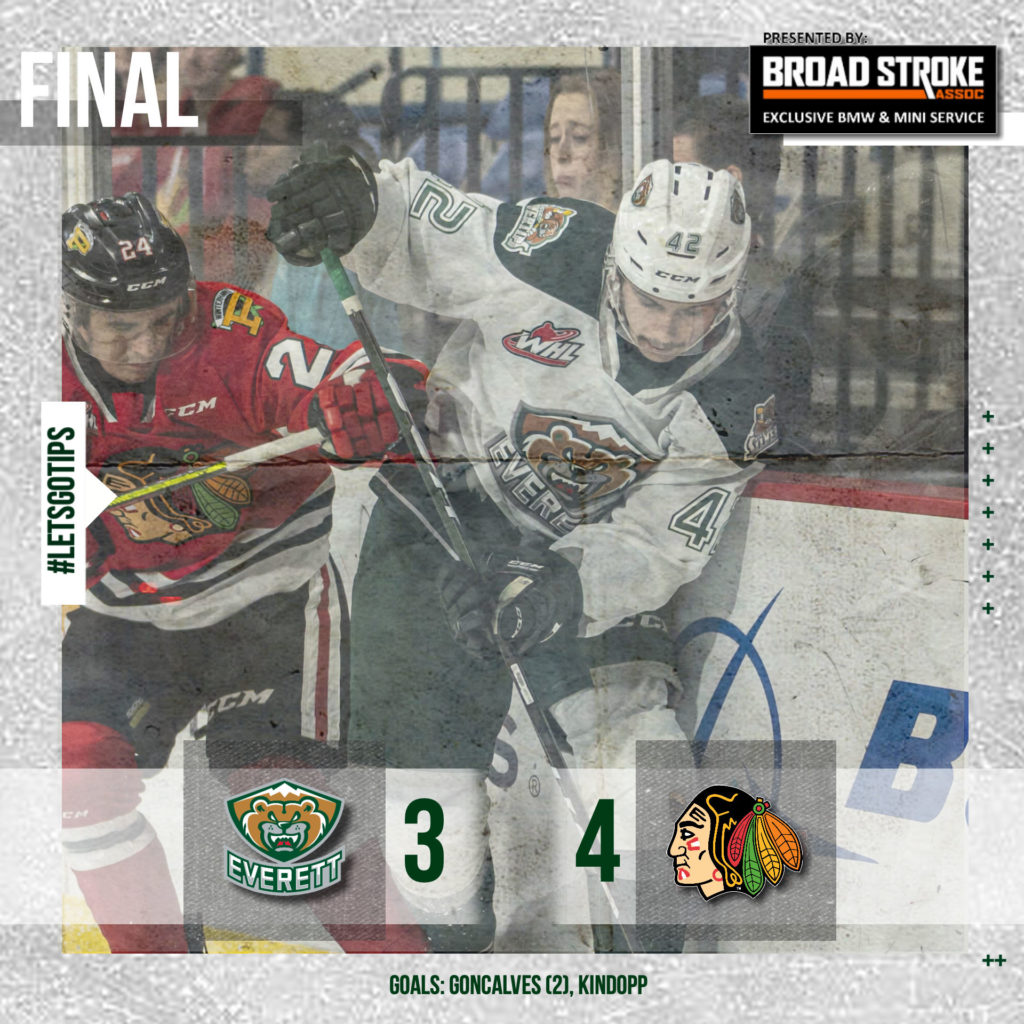 EVERETT, Wash. – Gage Goncalves scored twice for the second consecutive day, but the Portland Winterhawks patched a wire-to-wire effort enough to hold off the Everett Silvertips, 4-3 on Saturday before 5,158 fans at Veterans Memorial Coliseum in WHL action.

Nearly climbing out of a 4-1 hole with less than five minutes to play, Goncalves’ second goal and the 14th goal of the season credited to Bryce Kindopp – deflecting off Max Patterson – came 1:44 apart and another strong shift that nearly tied the game. Seth Jarvis earned the eventual game winner in the third period while Lane Gilliss and Jake Gricius had multi point games.

UP NEXT: The Tips return to play at home Sunday, to host the Tri-City Americans at 4:05 p.m. for Tips hat giveaway, presented by Buzz Inn Steakhouse.

Gricius buried a re-direction on Portland’s first shot of the game, 1:31 elapsed for a 1-0 lead and Tyson Kozak stashed a rebound at the right post for a 2-0 lead at 16:58.

Goncalves drew the Tips to within a goal at 3:01 of the second period when he hammered a one-timer into an open net, set up by Cole Fonstad’s cross-seam pass. The goal tailed a big breakaway save by Dustin Wolf moments before the goal, stopping Jake Gricius’ shorthanded deke.

The Silvertips coughed up the puck in the Portland zone, leading to Gilliss’ sixth goal of the season at 17:21 and in the third period, fell behind by three on another defensive zone giveaway, tucked by Seth Jarvis’ snap shot from the left circle with 10:58 remaining.

The Tips got to work in slicing the deficit on Goncalves’ second goal of the game, a wraparound deflection at Hofer’s 4:49 left.

Then with a little over three minutes to play and earning an offensive zone face-off, the Tips perfectly executed a designed play with Wolf to the bench for a sixth attacker. Max Patterson, winning a face-off to Gianni Fairbrother, went to the net and lofted a shot to the back of the net after Hofer stopped Fairbrother (originally credited to Kindopp) with 3:05 left to get the Tips to within a goal.

They refused to stop. The Tips came back next shift and nearly found Fairbrother wide open for a backhanded deke to an open net, but lost the puck on a last-second poke check. Seth Jarvis then went to the box for high sticking with 2:38 left, opening the door for a tie game. The Tips, coming into the game with the second best unit in the WHL, manufactured another face-off win and point shot, but Hofer’s save turned away their best chance before Portland closed out the game.

NOTES: Scratched from the lineup were Braden Holt (healthy), Jalen Price (healthy), Tyson Phare (injury),  and Jacob Wright (healthy) … Cole Fonstad has earned a point in all nine games with the Tips and has an 11-game assist streak … the Tips had their seven-game road win streak snapped, one shy of tying their franchise record.