RECAP // Coming to the Four-Front 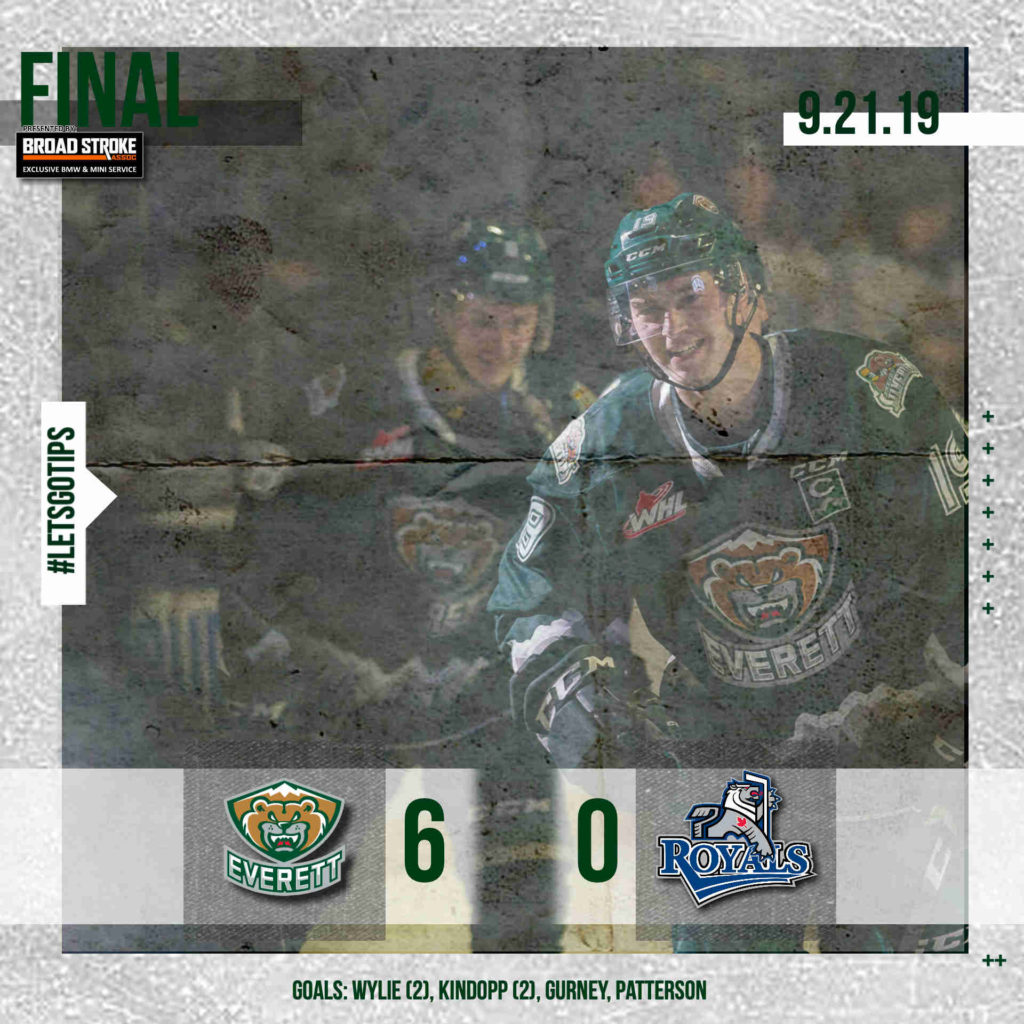 EVERETT, Wash. – Gage Goncalves (career high) and Bryce Kindopp each collected four points nights while Dustin Wolf moved into a third place tie on the club all-time shutout list (12) with 26 saves, helping the Everett Silvertips hammer the Victoria Royals in a 6-0 victory on Saturday before 4,420 fans in downtown Everett on Saturday night.

Wolf moved into a third place tie with Michael Wall on the shutout list while Kindopp moved into 17th on the Tips all-time points list, surpassing Dan Gendur and Torrie Wheat. The Tips earned their first victory of the season and outshot the Royals, 32-26.

Wyatte Wylie staked the Tips to a 1-0 lead with 4:34 left in the first period on a power-play goal, finishing a fantastic tic-tac-toe set up by Kindopp and Goncalves at the right circle. Kindopp stashed a backhander past Shane Farkas just 17 seconds into the second period for a 2-0 edge, and Justyn Gurney stashed a rebound into a wide open net, set up by Kindopp’s blast from the right circle at 9:30 for a 3-0 cushion.

Wolf turned away 13 shots through the first two periods and steered loose pucks into the corners and out of play with comfortable ease for much of the night.

Max Patterson walked out into the slot for a 4-0 lead, his first goal of the season at 7:21 of the third and Jack Lambert earned his first career WHL assist, helping dig the puck from the backboards.

From there, the Tips maneuvered to open the floodgates. Kindopp and Wylie each scored their second goals just 30 seconds apart, beginning with Kindopp going bar down on Farkas off the rush at 9:07 for a 5-0 lead. On the next shift, the Tips had Wylie cruising to the right circle and his snap shot finished Farkas’ work with a 6-0 lead, who was replaced for Brock Gould for the remainder of the game.

Farkas made 22 saves and Gould stopped all four shots in relief.

NOTES: Scratched from the lineup were Martin Fasko-Rudas, Brendan Lee, Michal Gut, Gianni Fairbrother, and Braden Holt … Kindopp has six points in his first two games as captain … the Tips improved to 33-15-3-4 all time against Victoria and have won the last two meetings by a combined score of 11-1 … the Tips went 1-of-5 on the power play.

UP NEXT: The Tips open a four-game road swing starting on Saturday, Sept. 28 against the Kelowna Rockets at 7:05 p.m. (KRKO / WHL Live) and return home on Friday, Oct. 11 for a 7:35 p.m. match-up with the Kamloops Blazers at Angel of the Winds Arena.

radko gudas The Herald
THE STACKS // See Radko Gudas. Get Out of the Way.
13 hours ago