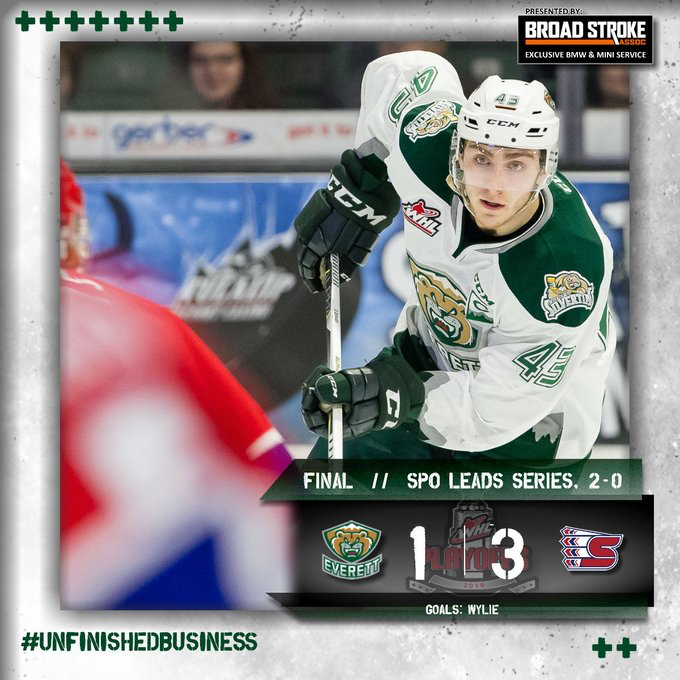 EVERETT, Wash. – Bailey Brkin had a 30-save performance as the Spokane Chiefs defeated the Everett Silvertips, 3-1 in game two of the second round of the WHL Playoffs before 3,995 fans at A.O.T.W. Arena on Sunday afternoon.

Wyatte Wylie potted the lone goal for the Silvertips while goaltender Dustin Wolf turned away 14-of-16 shots on goal. The Tips are faced with a 2-0 deficit in the second round series, where they begin their quest to rally in Spokane on Wednesday in Game 3. The Tips won 23 games on the road in the regular season, most in the Western Conference.

Everett defenseman Wyatte Wylie gave the Silvertips a 1-0 lead at 16:01. Right as a Tips’ power play expired, Wylie drilled a shot from the blue line past goaltender Bailey Brkin, off assists from d-man Jake Christiansen and forward Zack Andrusiak.

The Chiefs retailed two minutes later, to tie the game at 1-1 at 18:01. Spokane winger Riley Woods connected a pass to forward Jake McGrew, who carried the puck along the far side boards and cut into the slot and netted a backhand shot.

Entering tonight’s game, Everett converted on 25.9 percent of power plays, but fell short on their two man-advantage opportunities in the opening period, while they outshot the Chiefs 11-6.

Spokane forward Eli Zummack broke the tie and gave the Chiefs a 2-1 lead with a power play goal at 16:56. Forward Jaret Anderson-Dolan set up Zummack with a shot from the left circle, while defenseman Ty Smith recorded the secondary assist on the play.

Everett possessed a lot of offensive zone time in the final period, as they landed 14 shots in the third period, totaling with 31 on the game, while the Chiefs finished with 17 total shots on goal.

Tips goaltender Dustin Wolf was pulled for the extra attacker with 1:06 remaining in regulation, which led to Spokane center Luc Smith to score an empty netter, to make it a 3-1 final.

NOTES: Silvertips scratches included Dawson Butt, Riley Sutter, Dylan Anderson and Justyn Gurney … This is the 5th time the Chiefs and Silvertips meet in the postseason (first since 2015, won by the Silvertips, 4-2) … The Tips are 10-20 in Game 2 situations, and 8-8 on home ice … Everett went 6-0-1-1 against Spokane in the regular season … Everett went 0-for-3 on the power play … The Tips won 61.67 percent in the faceoff circle tonight.