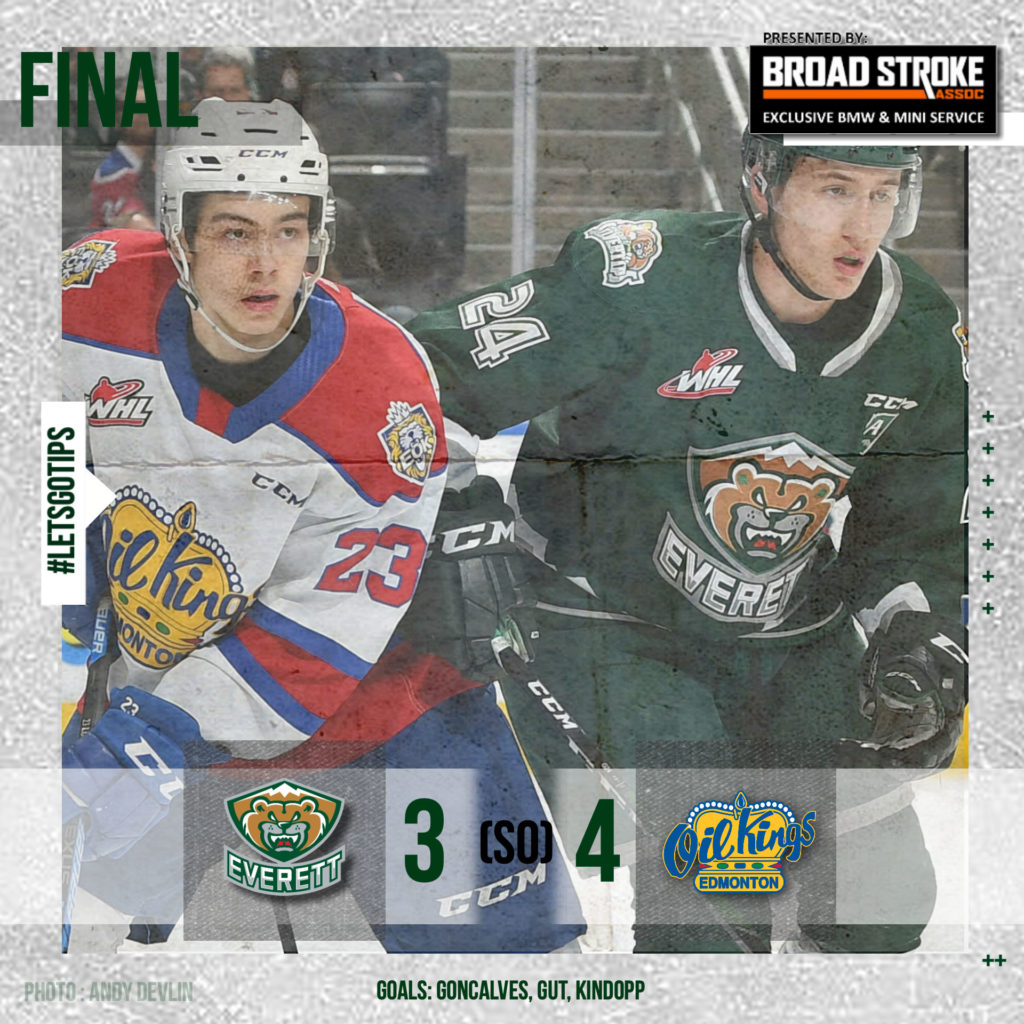 EDMONTON – Bryce Kindopp helped force overtime with a third period goal while Gage Goncalves logged a goal and an assist, but Josh Williams’ third round marker helped the Edmonton Oil Kings escape, 4-3 in a shootout over the Everett Silvertips in a New Year’s Day matinee before 9,110 fans at Rogers Place on Wednesday in WHL action.

In a battle between two teams in the CHL Top 10, the Tips opened up with a 2-0 lead before Edmonton rallied in the second period with a pair of power play goals. Michal Gut added his seventh goal of the season while Keegan Karki made 42 saves.

UP NEXT: The Tips six-game trip (1-1-0-1) continues on Friday against the Prince George Cougars at CN Centre at 7:05 p.m. (KRKO / Tips App / WHL Live) and return home Sunday, Jan. 12 against the Regina Pats at 4:05 p.m. Tickets are on sale for the Jan. 12 home game, the next SmileGen Family Fun Zone event. The first several hundred fans in attendance will take away a Tips beanie presented by BECU.

Gage Goncalves kicked off the scoring with his 18th of the season 2:05 into the game. Three minutes later, Michal Gut got a loose puck and fired it into the back of the net to give the Silvertips an early 2-0 lead. Gut’s goal was his first since scoring against the Spokane Chiefs on November 27th and now has seven on the year. Everett netminder Keegan Karki had a strong first period himself, stopping all 15 shots he faced in the period.

Go Gage, Go Gage! ✊@GageGoncalves gets Everett on the board against Edmonton!

The Oil Kings broke through in the second period and got two power play goals, including one from Dylan Guenther, who got the Oil Kings on the board 12:33 in the second with assists from Jake Neighbours and Matthew Robertson. Four minutes after Guenther scored, Carter Souch tied it for Edmonton with his 12th of the season.

At the 6:59 mark of the third, Edmonton got their first lead of the game with a Liam Keeler goal. Less than 30 seconds after Keeler’s goal, Bryce Kindopp made it a tie game as the puck just trickled past Sebastian Cossa’s pads and over the red line for Kindopp’s team-high 28th of the year. While each team had some late chances, none went through so we were off to a five-minute 3 on 3 overtime period.

Edmonton appeared to be in control for most of the frame but they couldn’t get past Karki, who made a sensational save on Carter Souch with 1:50 left to go. Souch came in on a breakaway and tried going forehand to the backhand before Karki made the huge save. It was the best chance for either team in overtime as no team could find the back of the net in OT. It meant that, for the second time this season, Everett was off to a shootout.

KARKI WITH THE HUGE SAVE! 😱😱@keegankarki makes the biggest save in OT and we're off to a shootout!

Dylan Guenther would score first for Edmonton while Kindopp was stopped by Cossa in the first round. Then, after Karki stopped Jake Neighbours, Michal Gut would tie it up with the third round next. Josh Williams scored on Karki, meaning that Gage Goncalves would have to score to keep it going. Cossa shut the door on him as the Silvertips secured one point and are now 1-1 in shootouts this season.