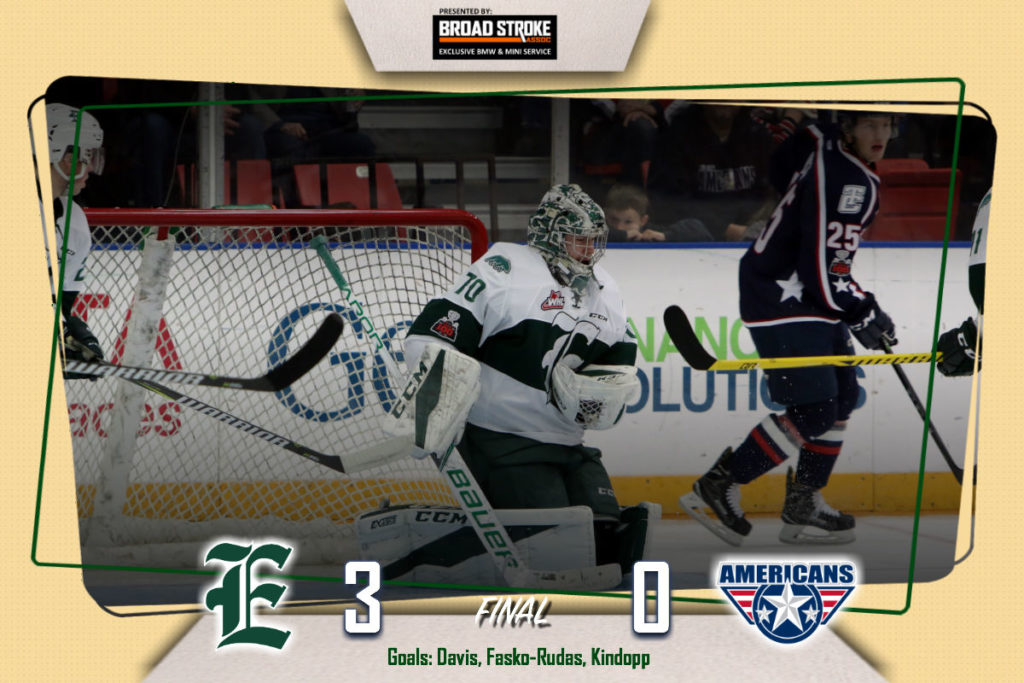 KENNEWICK, Wash. – Carter Hart broke the franchise all-time record with the 22nd shutout of his career, and Kevin Davis, playing in his 300th career WHL game, scored the game winner to lift the Everett Silvertips to a 3-0 victory over the Tri-City Americans before 3,054 fans at Toyota Center on Wednesday in WHL action.

Hart’s feat broke Leland Irving’s standard of 21 shutouts, which stood since 2007-08, and reached within five shutouts of breaking the WHL record, held by Tyson Sexsmith. The Tips, rebounding from back-to-back losses, improved to 7-3-0-1 in the last 11 games and blasted Tri-City with additional goals by Martin Fasko-Rudas (first in his WHL career) and Bryce Kindopp.

Hart saved his busiest period for the third, when he stopped 21 shots fired by the Americans.

Davis’ goal on his milestone night put the Tips up 1-0 just 2:57 into the game when he stole a rimmed pass to the right boards, cut to the middle and roofed a backhander under the crossbar on Beck Warm. Fasko-Rudas then potted his first at 8:59 on a set up by Matt Fonteyne, uncorking a one-timer from between the circles.

Kindopp padded the Tips lead to 3-0 on a power play goal, 12:13 into the second period. The Tips generated speed through the neutral zone, and Orrin Centazzo slipped soft pass onto the tape of Kindopp, who turned a backhand deke around Warm’s blocker side.

The Tips, leading 25-22 in shots through two periods, withstood Tri-City’s 21-2 barrage in the third period as the Tips wrapped up the game on a late power play after Dylan Coughlan was issued a major penalty and game misconduct for cross-checking with 28 seconds left.

Warm made 24 shots in net to take the loss for Tri-City.

The Tips return home Friday, hosting Spokane at 7:35 p.m. (1520 AM / WHL Live) for the next Hockey Happy Hour event. Doors will open at 6pm and tickets are available at www.everettsilvertips.com/hhh.

Notes: Silvertips scratches included Connor Dewar (injury) and Sean Richards (suspension) … Riley Sutter led the Tips in the face-off circle, at 16-of-30 … Davis’ goal was his seventh point in the last six games … the Tips improved to 2-1-1-0 this season against Tri-City.
Silvertips season ticket or mini-plan packages are available at www.everettsilvertips.com/season or by calling (425) 252-5100.