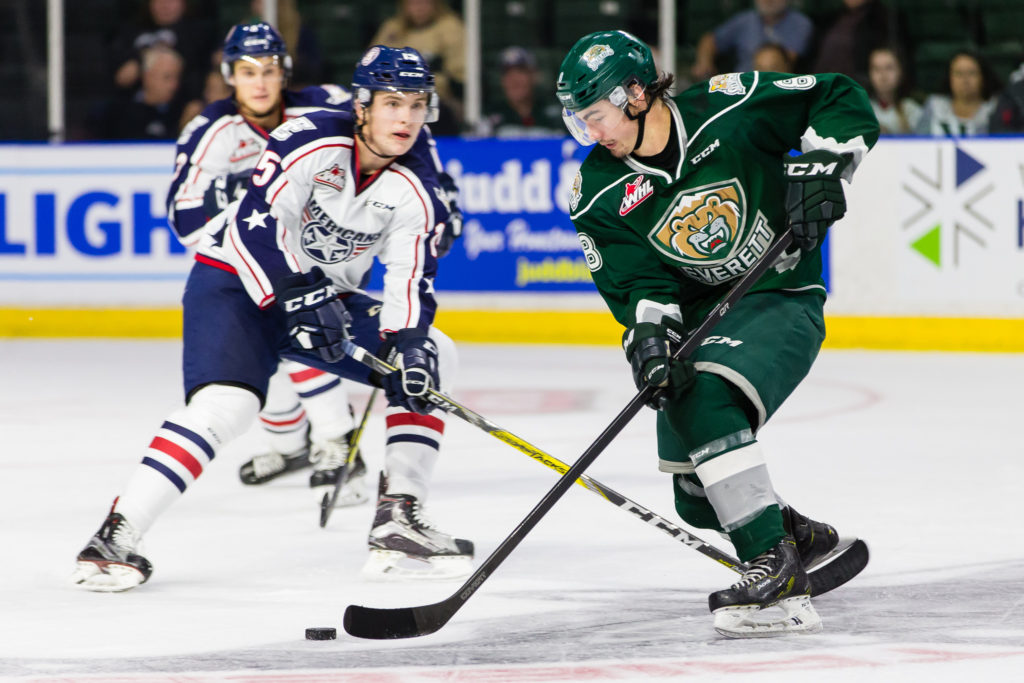 EVERETT, Wash. – Goaltender Carter Hart stopped 15 of 16 shots on goal, Dominic Zwerger collected his first goal on home ice to tie the game, and Graham Millar slammed the game winning goal late in the third period to lift the Everett Silvertips to a 3-1 win over the Tri-City Americans on Wednesday.

Silvertips goalie Carter Hart, who is playing on home ice for the first time this season after returning from the Philadelphia Flyers training camp held the Tri-City Americans scoreless until 15:59 into the first period while improving to 2-0-1 on the season. Noah Juulsen, selected as captain of the Silvertips earlier in the day, potted a goal and earned an assist.

Maxwell James beat Hart on a breakaway, after a lead pass by Juuso Välimäki for a 1-0 lead in the first period.

The Silvertips tied it up early in the second period at 1:31 when Tri-City sent two men to the box putting the Tips on a two-man advantage. Dominic Zwerger was able to find the back of the net with a rebound assist from Kevin Davis, who misfired on a one-timer.

Hart kept the Americans off the board for the rest of the game while Millar continued his dominance through the first five games. He put in the go ahead goal with 5:20 left in the game off a bounce from Connor Dewar, who was set up by Devon Skoleski right in front of the net.

Beck Warm, who made 31 saves, was pulled for an extra skater with less than two minutes left in regulation. Juulsen capped the rally with an empty net lob from his own blueline to seal the game with 27.7 seconds left.

The rubber match is on Friday October 7th at 7:35PM (Fox Sports 1380 / WHL Live) in Everett at XFINITY Arena. Tickets are on sale for a “Hockey Happy Hour” special, located at the Silvertips website. | CLICK HERE

Notes: Silvertips scratches included Ian Walker, Montana Onyebuchi, Orrin Centazzo, Spencer Gerth, and Eetu Tuulola … through the first five games, the Silvertips have only trailed for a total of 22:50 … Matt Fonteyne’s assist on Juulsen’s goal extended his scoring streak to five straight games … Zwerger has points in two of his first three games in Everett.