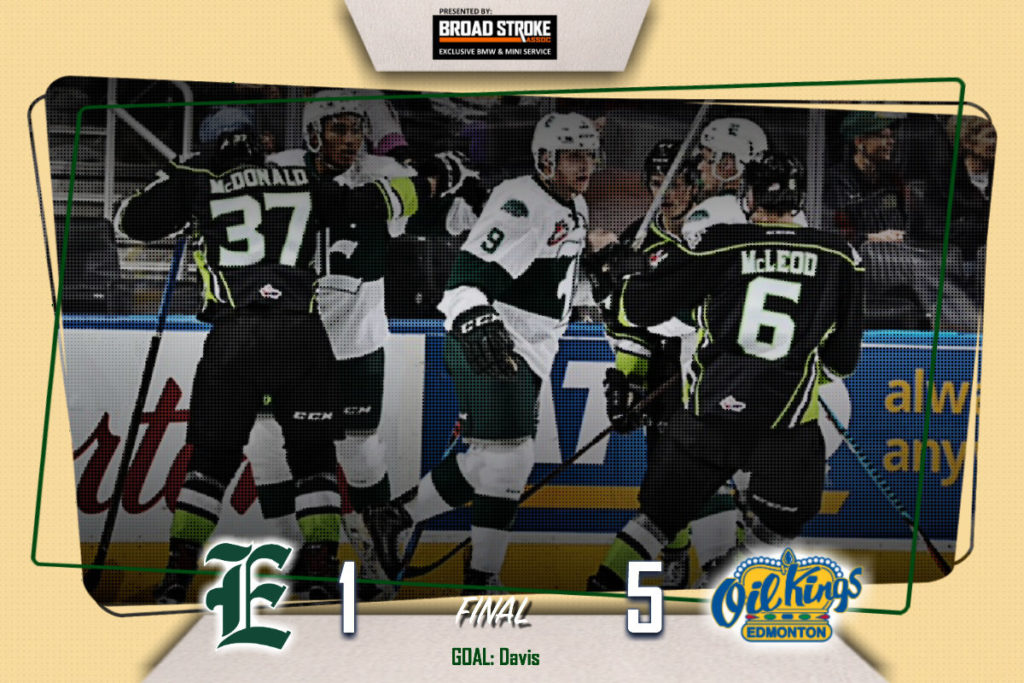 EDMONTON  – Trey Fix-Wolansky scored twice and added an assist for the Edmonton Oil Kings, who skated past the Everett Silvertips, 5-1 before 5,098 fans at Rogers Place on Sunday in WHL action.

The Silvertips scored their lone goal in the third period on a Kevin Davis rebound and the Silvertips dropped their second straight game at Edmonton in the lifetime series, falling to 5-6-0-0 in 11 all-time games. Tomas Soustal recorded three assists in his second game with the Oil Kings after arriving in a trade with Kelowna.

Conner McDonald scored his first of the season at the top of the right circle at 9:12 of the first, and Fix-Wolansky drove the left wing to slam a one-timer at 10:51 to put the Tips in a 2-0 hole.

The Silvertips worked on chipping away by tying the shot count, 17-17 by the end of the second period, but fell into a 4-0 hole when Brett Kemp deflected a pass from the right corner off the pads of Dorrin Luding, 1:28 into the third period. Davis finally got the Tips on the board 11:07 into the period when he stashed a rebound off Connor Dewar’s bid from the left wing.

Edmonton closed the scoring on a 5-on-3 goal by Fix-Wolansky, stationed at the left circle, at 15:41.

Luding made 15 saves in 41 minutes of action before giving way to Kyle Dumba, making his first appearance with the Tips. He recorded seven stops on eight shots.

DUMBA
NOTES: The Silvertips scratches included Mark Liwiski (healthy), Kyle Walker (upper body, day-to-day), Pavel Azhgirei (healthy), Gianni Fairbrother (healthy), Carter Hart (illness, week-to-week), and Dustin Wolf (lower body, 4-6 weeks) … Ethan Browne, from nearby Sherwood Park, Alberta, made his season debut with the Silvertips … Matt Fonteyne, from nearby Wetaskiwin, wore the “C” for the game … Davis has goals in back to back games.
Silvertips season ticket or mini-plan packages are available at www.everettsilvertips.com/season or by calling (425) 252-5100.