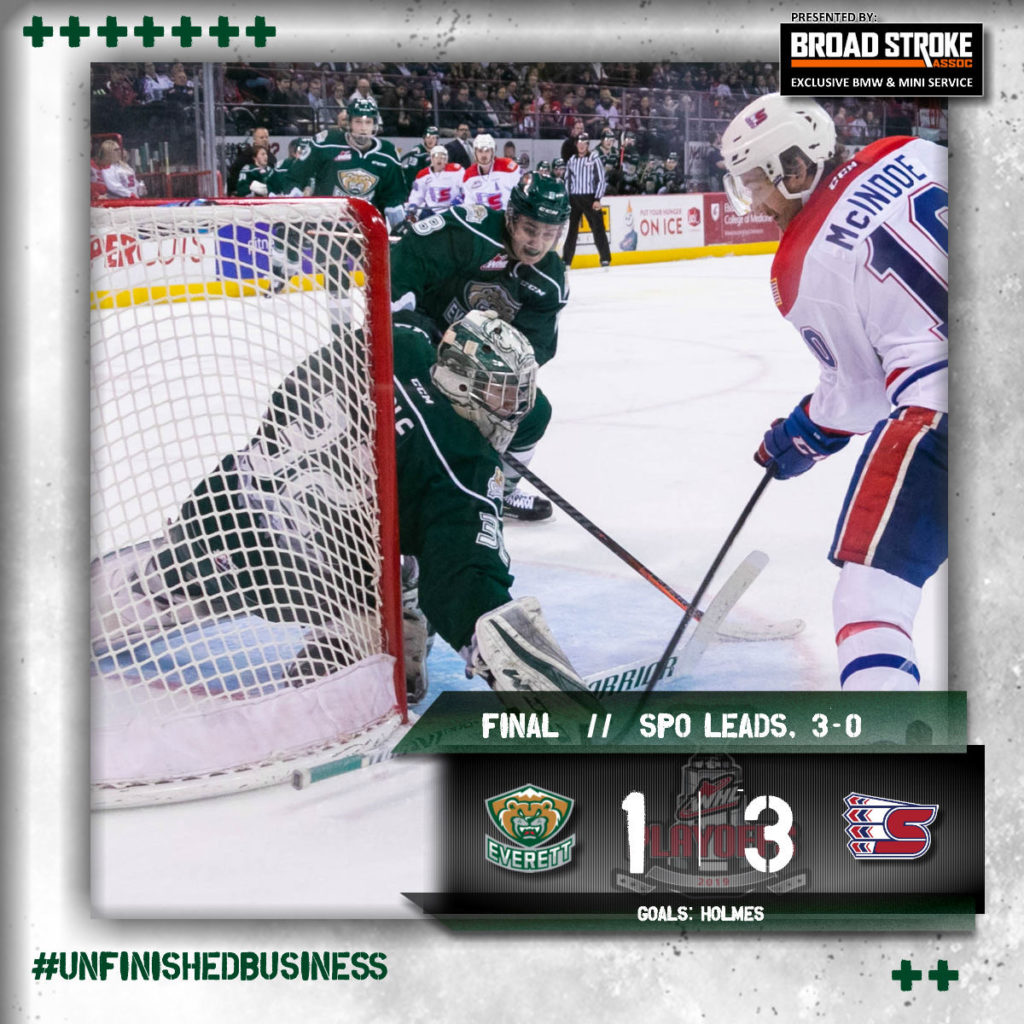 SPOKANE, Wash.— Bailey Brkin turned in 29 saves and Adam Beckman broke a tie game in the third period to help get the Spokane Chiefs past the Everett Silvertips, 3-1, in Game 3 of the second round of the WHL Playoffs before 3,831 fans on Wednesday night at Spokane Arena.

Robbie Holmes netted the Silvertips single goal while Dustin Wolf turned away 18 of 20 shots on goal. The Tips, now face a task to become the third team in WHL history to rally from a 3-0 deficit to win a playoff series.

UP NEXT: The Tips are in Spokane again for Game 4 on Friday, April 12, at 7:05 p.m. (1380 AM / 95.3 FM / TuneIn App / WHL Live). If necessary, Game 5 follows in Spokane on Saturday night and if the Silvertips can patch together back to back wins, game six comes to downtown Everett on Monday, April 15, at 7:05 p.m. Tickets will be sale at www.everettsilvertips.com/playoffs.

“We played a good hockey game,” said Silvertips head coach Williams. “It’s nothing to hang our heads and feel sorry for ourselves—we’ve held a good hockey club to two or four goals the last two games the whole series. One thing we won’t do is quit.”

The return of Riley Sutter – his first game action since Dec. 29 – held a firm impact to the team’s on-ice dynamic. Williams said the center’s performance was a testament to Sutter’s work and physical maintenance while he was out.

“He brings another dynamic that we’ve missed since Christmas,” Williams said. “He’s not only the top centerman on our team but one of the top in the league.”

“Obviously I’m a bigger guy so I have to use that to my advantage,” said Sutter. “That’s part of my game, I like finishing checks and I do think I did a good job of that.”

Chiefs forward Ethan McIndoe claimed the first goal of the game, assisted by Filip Kral, Beckham) on a power play from a Dewar interference call. Spokane has converted at 54% on the power play in the first round and 50% in the second round.

Holmes scored shortly after McIndoe to tie the game 1-1 with a snapshot off the right circle at 10:21. Andrusiak and Fairbrother assisted his second goal of the post season.

After a scoreless 2nd period which showcased two point blank saves by Wolf on Luc Smith and Riley Woods, Adam Beckman buried a rebound at the right circle for a 2-1 Spokane lead only 2:21 into the third off an assist from Luc Smith.

Everett pulled goalie Dustin Wolf around 1:14 left. After a Silvertips face-off win, Spokane forced a tied up puck to center ice and Jaret Anderson-Dolan sauced an empty netter with 28 seconds left in regulation.

NOTES: Silvertips scratches included Dawson Butt, Dylan Anderson Jalen Price, Conrad Mitchell and Justyn Gurney … the Tips outshot Spokane for the third straight game and finished 30-20 for the game … Andrusiak’s assist gave him points in five straight playoff games, longest for the Tips in this year’s WHL Playoffs … the Tips led the game in face-off wins, 25-21 with Sutter posting a 10-of-15 clip at the dot.