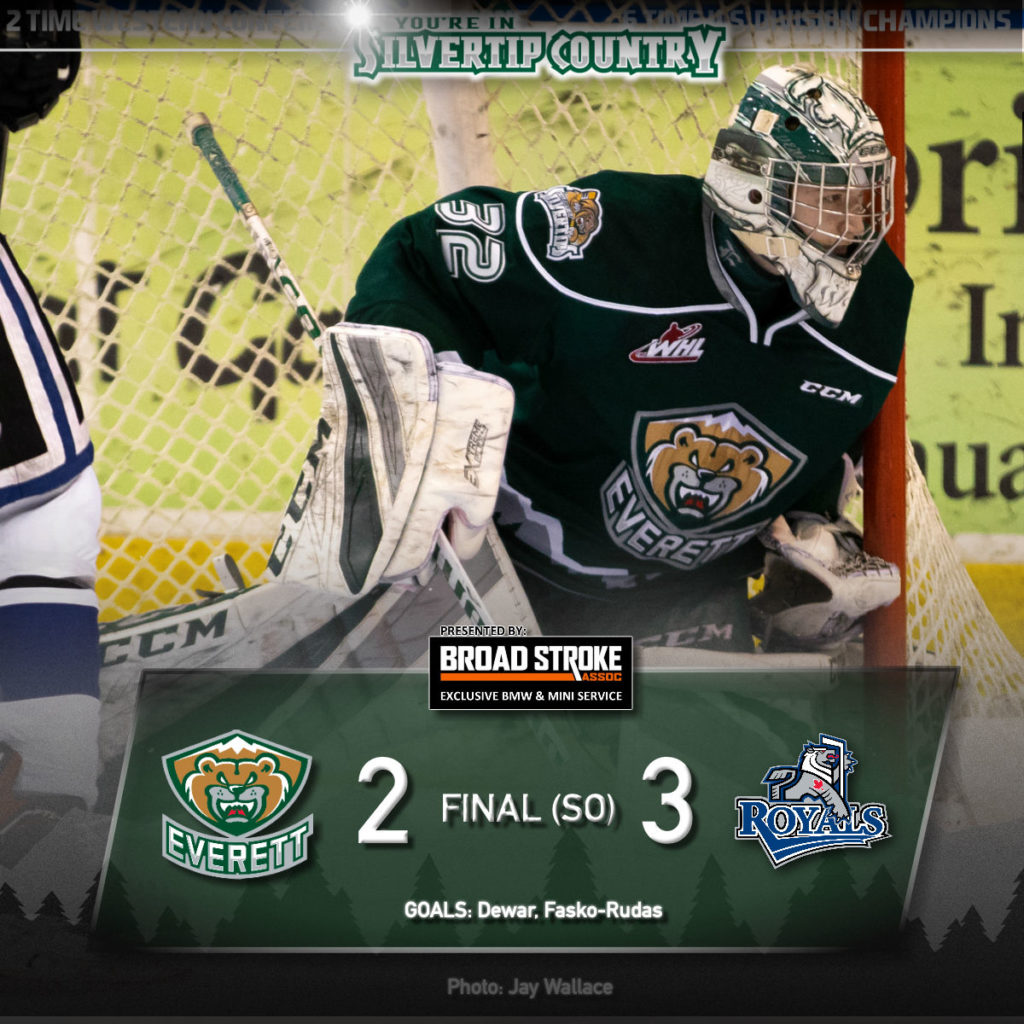 VICTORIA, British Columbia – Igor Martynov scored in the third round to help the Victoria Royals sneak past the Everett Silvertips, 3-2 in a shootout, before a sellout crowd of 7,006 on Friday in WHL action at Save-On-Foods Memorial Centre.

The Tips, earning a point in their final regular season road game (23-9-0-2), were lifted by goals from Connor Dewar and Martin Fasko-Rudas, who returned to the lineup after missing Tuesday’s game due to a scholastic commitment in Slovakia. The Tips shootout point locked them in for the second seed in the Western Conference, already with the U.S. Division banner in hand, and will face the Tri-City Americans in the opening round of the WHL Playoffs.

Dustin Wolf turned in 28 saves for the Silvertips.

UP NEXT: The Tips return home for Fan Appreciation Night in their final regular season home game on Saturday against the Royals at 7:05 p.m. Saturday’s game is sold out and WHL Playoff tickets are currently on sale at www.everettsilvertips.com/playoffs.

Dewar’s 36th goal of the season put the Tips ahead, 1-0 just 1:15 into the game after he slammed in a rebound past Griffen Outhouse’s blocker. Just 17 seconds later, Brandon Cutler snuck in a loose puck at the top of the crease for a 1-1 tie and his 13th goal of the season, and Wolf kept the Tips locked into the tie with a highlight reel pad save on Dino Kambeitz late in the first period.

Early in the second, Wolf made another incredible series of stops, first on a Tarun Fizer breakaway and stopping Tanner Sidaway’s follow up rebound at the left circle. The Tips then seized the lead again on a Martin Fasko-Rudas rebound at 8:59, set up from Connor Dewar’s left circle face-off win to Wyatte Wylie at the point.

Just 57 seconds later, Cutler scored his second goal of the game on a rebound attempt.

The Tips unloaded 15 shots on net on the third period and nearly won it in the last minute of regulation on a Reece Vitelli attempt, and Victoria held a 4-2 lead in shots for overtime which also included a point blank save on a Cutler backhanded attempt.

Ralph Jarratt scored in the bottom of round one and Bryce Kindopp tied it for the Tips on a snap shot in the second round. After Zack Andrusiak missed wide in the third round, Martynov ended the game on a goal from the inside of the right circle.

Outhouse made 35 saves in net for Victoria.

NOTES: Silvertips scratches included Justyn Gurney, Conrad Mitchell, and Riley Sutter … the Tips led the game in shots, 37-32 … Dewar moved to 81 points on the season, 7th most in Tips single season history (ahead of 70 by Shane Harper, 2009-10) … the Tips had the lead in face-off wins, 33-21 … Lucas Cullen made his Silvertips debut … Jake Christiansen led the Tips with six shots on goal.