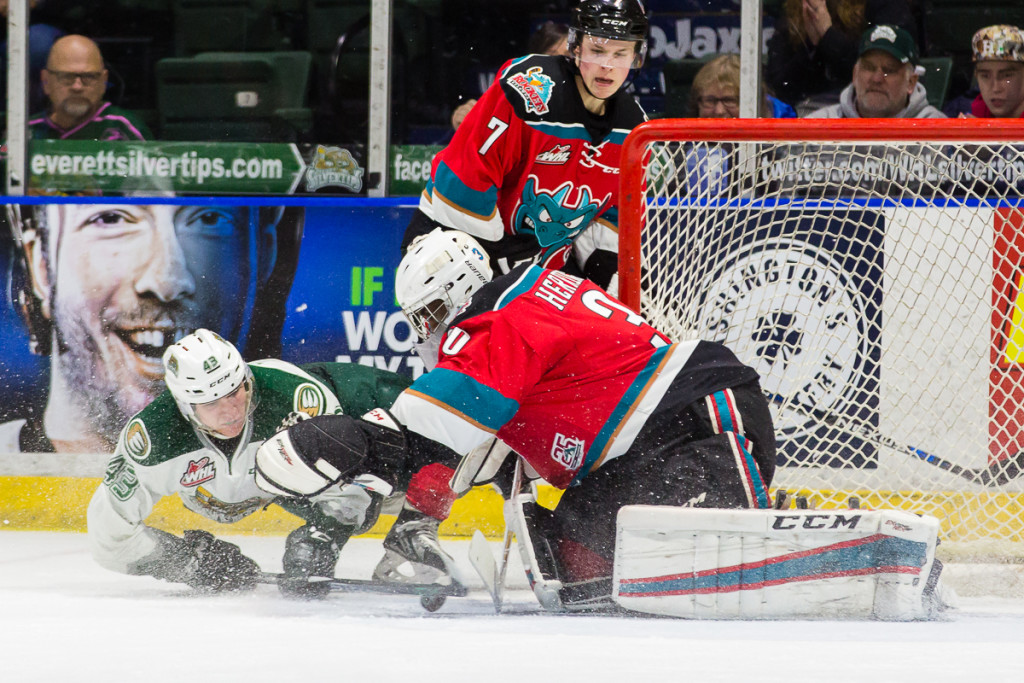 EVERETT, Wash. – Justin Kirkland’s game-winner 1:24 in thwarted a monster rally, but the Everett Silvertips claimed a critical point in a four-goal, third period comeback, ultimately settling for a 6-5 overtime loss to the Kelowna Rockets on Wednesday at XFINITY Arena.

Trailing 5-1 after two periods, the Silvertips stormed back in the third period for four goals in a span of 7:07 against the defending WHL champions, finished by Connor Dewar’s highlight-reel shorthanded goal with 6:02 left in the third period. By the end of the night, they boosted their lead back to six points for first place in the U.S. Division with 11 games remaining.

Patrick Bajkov tallied a goal and an assist, while Yan Khomenko registered a pair of assists.

Tyson Baillie, scoring his first of two goals for Kelowna, stole a pass up the left boards and hammered a slapper from the left circle for a 1-0 lead at 7:36 of the first period, followed by Devon Skoleski’s penalty shot goal on Michael Herringer, a forehand deke from the right wing at 18:14 for a 1-1 tie.

Kelowna then gripped the lead at 5-1 with four goals in the second period. Calvin Thurkauf, scoring his first of two in the game, wired a wrister under the bar on Carter Hart at 10:12 for a power play goal. Baillie’s second of the night, a tap-in at 11:27, was followed up by Thurkauf’s second goal with 4:20 left for a 4-1 bulge.

Tomas Soustal’s wraparound put Kelowna up 5-1 with 1:25 left in the period, and Hart was lifted for Mario Petit to begin the third period.

The Silvertips eventually broke through to begin the rally when Bajkov slammed a re-direction from Khomenko’s centering pass, from behind the net, through Herringer’s five-hole at 6:51 for a 5-2 deficit. Matt Fonteyne knifed through the Kelowna defense, from the right circle, to follow up his own rebound to slice Kelowna’s lead to 5-3 at 9:18, prompting the Rockets to burn their timeout.

Following Cal Foote’s cross checking penalty, the Silvertips cranked the rally to a 5-4 deficit when Dario Winkler slammed a rebound, power play goal from the left circle at 11:17. Then, on a Kelowna power play, Connor Dewar nearly singlehandedly brought the house down.

Brycen Martin advanced a loose puck puck through the middle of the Rockets power play, and Dewar pushed the relay through center ice, prompting a race with Lucas Johansen through the neutral zone.

Dewar muscled his way around the Kelowna defenseman to force a shot on Herringer, and incredibly manufactured a backhander while off-balance that slipped through Herringer for a 5-5 tie with 6:02 left, sending XFINITY Arena into pandemonium.

In overtime, the Tips best chance to win came when Bajkov nearly connected a breakaway pass that fell awry. On the next shift, Kirkland beat Petit on a wrister from the left circle to end the game with 1:24 elapsed.

Herringer earned the win with 16 saves.

The Silvertips end their homestand on Friday, hosting the Kamloops Blazers in the final meeting of the season at 7:35 p.m. from XFINITY Arena (1380 AM /WHL Live). Ticket and beverage combos are available for $23, available online. | BUY TICKETS