RECAP // Putting Out the Blaze 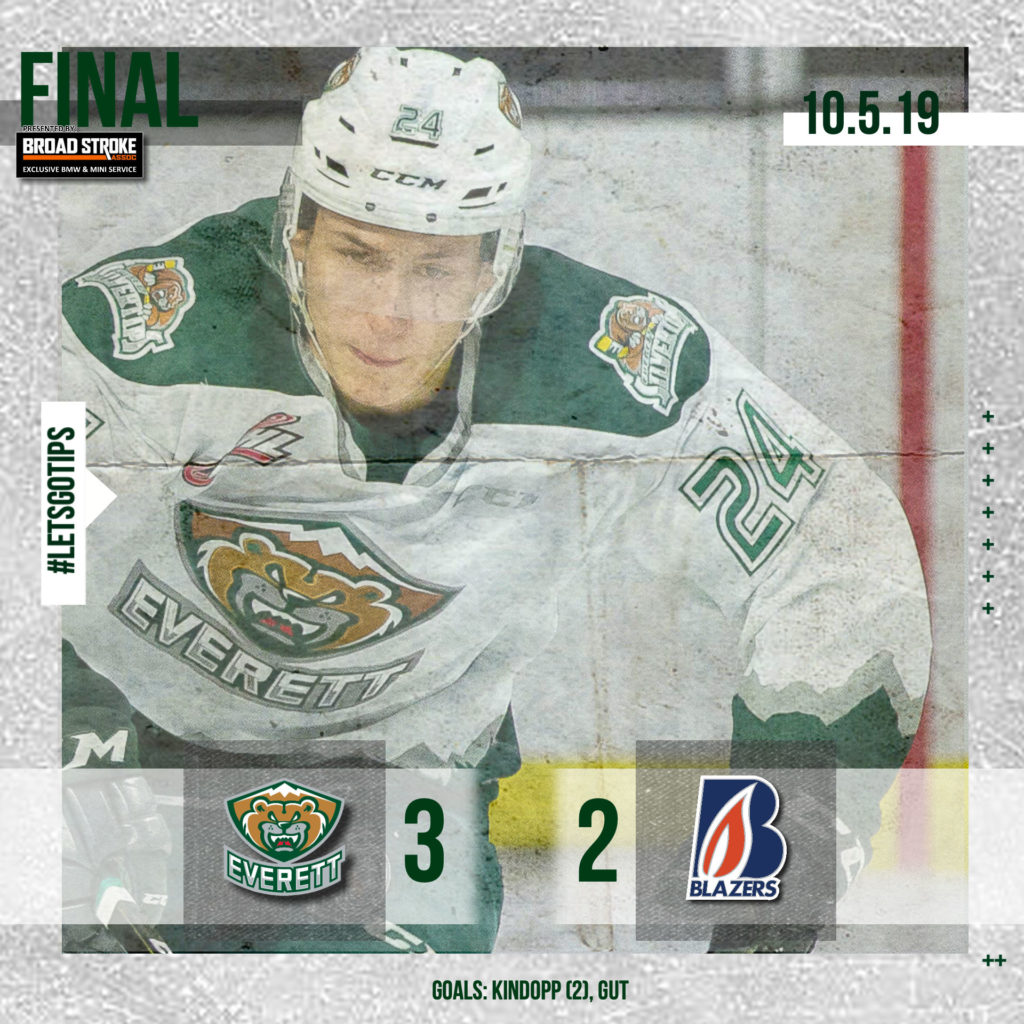 KAMLOOPS, British Columbia – Captain Bryce Kindopp buried two goals and added an assist while Dustin Wolf turned in 34 saves to lift the Everett Silvertips to a 3-2 victory over the Kamloops Blazers, Saturday in WHL action before 3,453 fans at Sandman Centre.

The Tips returned to the .500 mark with their first road win of the season and Kindopp logged the 41st multi point game of his career, elevating the Tips to a 2-0 edge by the end of one period. Michal Gut returned to the lineup to score his first career WHL goal and added an assist, while Gianni Fairbrother earned an assist in his season debut.

Kindopp buried a backhanded rebound for a power play goal at 6:49 for a 1-0 lead, after Gut won a face-off back to the right point and Wyatte Wylie funneled a shot to the net. Kindopp then pounced on a turnover and raced away for a breakaway, tucking a forehand deke on Dylan Garand for a 2-0 lead with 5:48 left in the first period.

The Tips outshot Kamloops, 17-9 in the first period and Dustin Wolf turned in a big save just two minutes into the game.

Caedan Bankier earned his first career goal on a one-timer at 14:39.

The Tips withstood a 15-2 shots advantage by Kamloops in the third period and Wolf turned in an array of spectacular saves, including a cross-ice set up to Orrin Centazzo for a one timer. Connor Zary then corralled a Zane Franklin breakaway pass but Wolf’s right pad save withstood the scoring chance.

Kamloops pulled Garand in the final minute but the Silvertips flushed the puck away for one last face-off in the Blazers zone to end the game.

NOTES: Scratched from the lineup were Braden Holt, Martin Fasko-Rudas, Conrad Mitchell, Jack Lambert, and Jacob Wright … the Tips have improved to 8-0-1 in the last nine meetings over Kamloops … Wylie extended his point streak to four straight games … the Tips earned the edge in the face-off circle, 33-29.

UP NEXT: The Tips continue the four-game road swing tomorrow against the host Spokane Chiefs at 5:05 p.m. (KRKO / WHL Live) and return home on Friday, Oct. 11 for a 7:35 p.m. match-up with the Blazers at Angel of the Winds Arena.