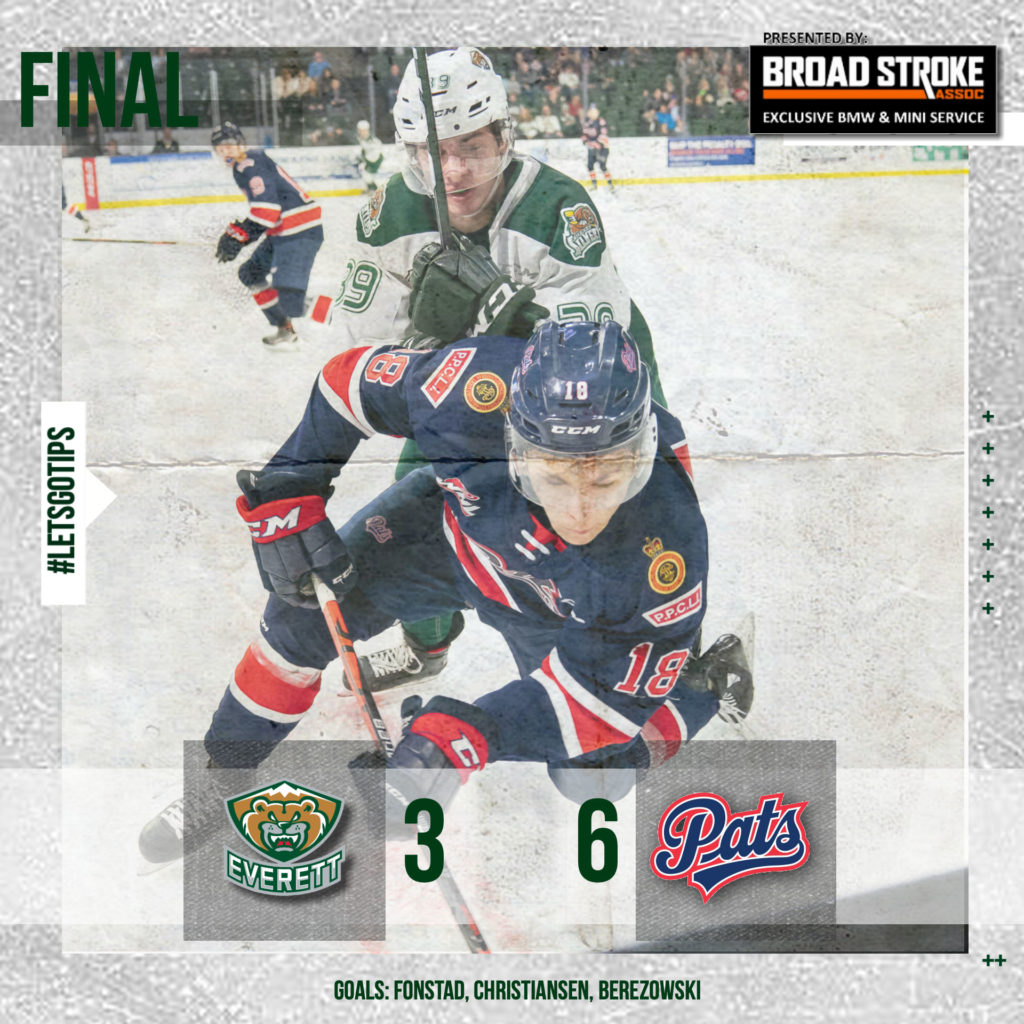 EVERETT, Wash. – Nikita Sedov bagged four assists and the Regina Pats used a pair of power play goals early in the second period to hold off the Everett Silvertips, 6-3 on Sunday in downtown Everett before a crowd of 6,536 in WHL action at Angel of the Winds Arena.

UP NEXT: Everett is back home Friday night as the Tips get a visit from the Kelowna Rockets before taking on the Seattle Thunderbirds on Saturday. It’s Hockey Happy Hour on Friday where fans can save $15 with a ticket/drink combo, and Saturday is our Local Heros Night Fundraiser. Get your tickets at the Silvertips office or call 425-319-3712 for more information.

The opening 20 minutes saw several chances for both sides but it was the Pats who opened the scoring. At 6:36 into the first, Zack Smith sniped one past Dustin Wolf to put Regina up 1-0 but the Tips would battle back. Less than eight minutes later, Cole Fonstad scored to even it at one apiece, with assists from Bryce Kindopp and Jake Christiansen. It was Fonstad’s third straight game with a goal as he now has a point in seven straight games.

Regina started the second period on the man advantage as Justin Gurney received a double-minor late in the first period for a high-sticking penalty. The Pats made the most of their opportunity, scoring two goals in a 1:03 span with Carson Denomie and Riley Krane getting power play goals. It wasn’t the only scoring in the middle frame as Jake Christiansen scored a power play goal to cut the Tips deficit to one, firing a missile from the slot at 9:10.  It was a busy period for Silvertips netminder Dustin Wolf as he made15 saves in the second.

The Pats got out to a quick start in the third, scoring on a deflection by Drew Englot at the net at 1:43, then on a Robbie Holmes snap shot from the left circle for a 5-2 lead at 2:24. The Tips got to work on narrowing the deficit and cut the score to 5-3 on a Jackson Berezowski rebound at 12:32, set up by Gianni Fairbrother’s one timer on the power play.

Austin Pratt finished the scoring on an empty netter with 1:07 left in the game.

NOTES: Scratched from the lineup were Kasper Puttio, Braeden Lee, and Tyson Phare …  Fonstad has scored a goal in three straight games and became the fifth Silvertip this season to register double digits in goals …  Braden Holt finished the final 17 minutes in net and recorded six saves.