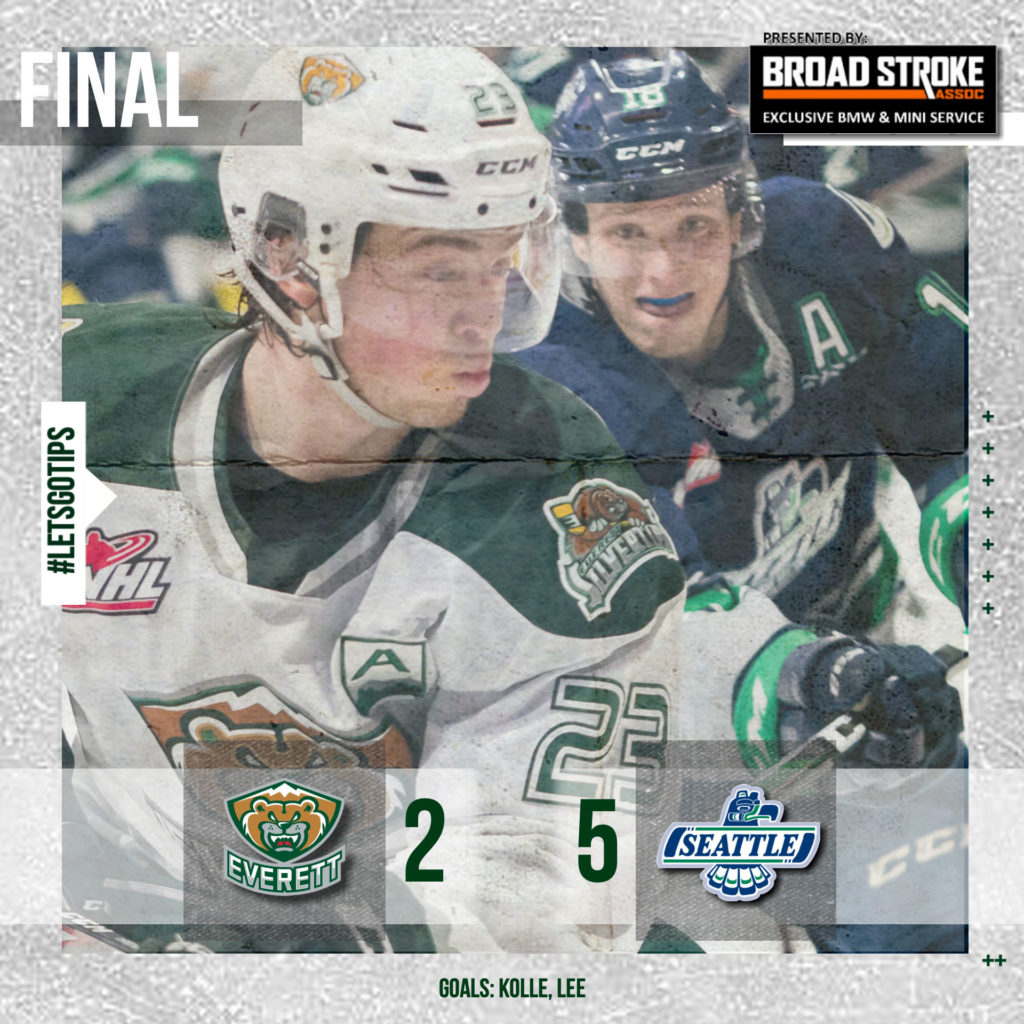 EVERETT, Wash. – Hockey fans were in for a treat on Saturday as the Everett Silvertips welcomed their 1-5 rivals, the Seatle Thunderbirds, for their final meeting of the regular season at AOTW Arena. Although the Silvertips would get the first goal of the night, thanks to a Ty Kolle shot that was deflected in, Seattle scored five unanswered goals to defeat the Silvertips, 5-2 in downtown Everett on Saturday in WHL action.

Kolle’s opening goal put Everett ahead in the second period before a flurry of Seattle goals in the second period put the Thunderbirds in front after two. Seattle would add two late goals in the final before Brendan Lee sniped a shot past Seattle netminder Roddy Ross but Everett’s deficit of three was simply too much to overcome. Everett is now second in the US Division behind Portland, who won in overtime against Victoria.

UP NEXT: The Silvertips hit the road with four crucial US Division games upcoming as they will return to AOTW Arena for a battle with the Victoria Royals on March 20th. It’s Fan Appreciation Night as the Silvertips will be giving away over $10,000 in prizes throughout the evening. Get your tickets while can as puck drop is 7:35 for that one and doors will open at 6:35 pm.

The Tips visit the Thunderbirds in the final matchup of the season tomorrow, 5:05 p.m. at accesso ShoWare Center (KRKO / Tips App / WHL Live).

It was an uneventful first period as neither team could find the back of the net. Everett doubled Seattle in shots 14-7 through the first twenty minutes but could do nothing on special teams as the Tips went 0 for 2 on the man advantage. It was the first time since February 22nd that Everett didn’t manage to score a first period goal as they score was tied with forty minutes of play remaining.

The middle period saw plenty of action from both sides. Ty Kolle started the scoring for Everett 4:27 into the second as his shot from the left circle deflected off a T-Birds defender and got past Seattle netminder Roddy Ross. However, that would be the only score of the period for the Silvertips as the T-Birds took over. Andrej Kukuca put home a Connor Bruggen-Cate rebound at 5:35 of the second before Bruggen-Cate got his own goal two minutes later on a loose puck that got past Dustin Wolf. Keltie-Jeri Leon would get the final goal of the period, a backhander past Wolf, at 11:55 to give Seattle a 3-1 lead with twenty minutes left.

After a failed Dustin Wolf clearance, Andrej Kukuca snatched the puck and knocked it in backhanded 14:31 into the third to give the T-Birds a 4-1 lead. Seattle would get an empty-netter on the penalty kill less than a minute later as Peyton Mount sent the puck the length of the ice to give Seattle a 5-1 advantage with 4:34 remaining in the game. Brendan Lee scored his ninth of the season at the 18:55 to close the scoring.

GAME NOTES: Scratched from tonight’s game were Hunter Campbell, Hunor Torzsok, Gianni Fairbrother, and Aidan Sutter … Brendan Lee has scored in back to back games for the first time since he scored in three straight games between October 6-11th… the Tips are now 19-2-1-1 in the last 22 games.