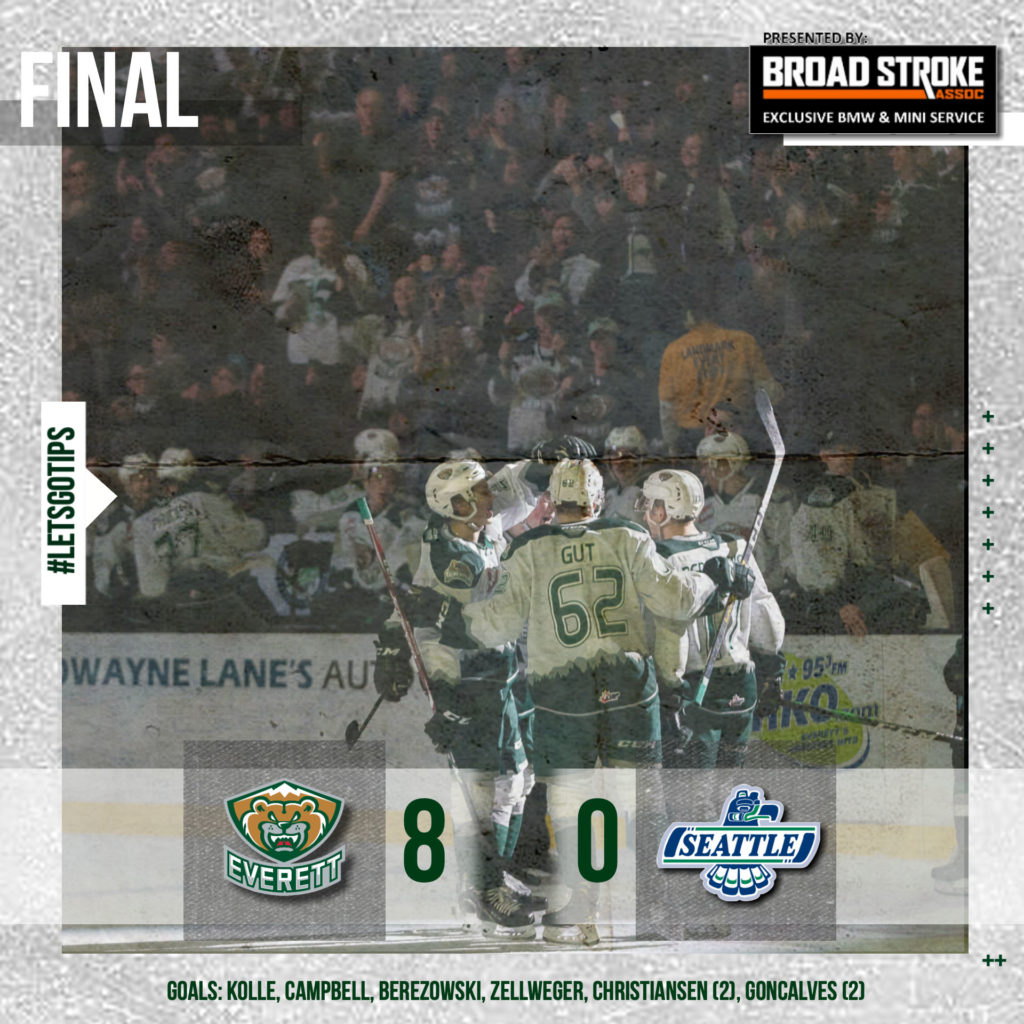 EVERETT, Wash. – Jackson Berezowski recorded a career high four points (1g-3a) while Dustin Wolf made 14 saves for his 17th career WHL shutout, as the Everett Silvertips cruised to an 8-0 victory over the Seattle Thunderbirds before a sellout crowd of 8,319 on Saturday in downtown Everett at Angel of the Winds Arena in WHL action.

UP NEXT: The Silvertips head out for a three-game road trip starting Sunday in a rematch with the Thunderbirds, 5:05 p.m. (KRKO / Tips App / WHL Live) at accesso ShoWare Center. The Silvertips return home Sunday, Jan. 26 against the Spokane Chiefs at 4:05 p.m. for Hat Giveaway presented by Buzz Inn Steakhouse.

It was a great opening frame for newly acquired Silvertips. Ty Kolle gave Everett the lead 8:50 into the first period as Jackson Berezowski and Ronan Seeley got assists on the play. It was Kolle’s first goal with the Silvertips and his fifth of the season.

Then, with under three minutes left to go in the first, Hunter Campbell’s first goal as a Silvertip – a snipe from between the circles – beat  Roddy Ross and put the Silvertips up two at the 17:44 mark. The Tips outshot Seattle 18-6, with a dominant first period in puck possession.

The Silvertips scoring continued in the second period with a Jackson Berezowski goal exactly one minute into the middle frame. Just 3:10 later, Olen Zellweger put a beautiful spin on a T-Birds defender, Henrik Rybinski and sniped it past Ross for his second of the season. It also made it a 4-0 lead in favor of the Silvertips but the scoring wouldn’t finish.

Jake Christiansen made it a five-goal game as he put home his tenth goal of the season with four minutes left in the second, firing a snap shot past Roddy Ross in a four on four situation and chasing Ross from the game for Thomas Milic. With forty minutes in the book, Everett had a 5-0 lead and weren’t looking back.

Gage Goncalves tied a Silvertips record for fastest goal to begin a period, seven seconds past the puck drop, as he re-directed Bryce Kindopp’s centering attempt past Milic for a 6-0 on a five-on-three situation. On the ensuring five-on-four, Jake Christiansen hammered a one-timer past Milic from the right circle for a 7-0 advantage.

Goncalves would wrap up the scoring with his 23rd goal of the season on a scramble at the net at 6:51.

NOTES: Scratched from the lineup were Dylan Anderson, Gianni Fairbrother, and Dawson Butt … Kasper Puutio made his Silvertips debut and recorded a shot on goal with a +1 rating … Kindopp’s pair of assists moved him into 8th place on the Silvertips all-time points list, surpassing Kellan Tochkin … Goncalves’ goal was the third occasion the Tips scored seven seconds into a period, last accomplished in 2013-14 by Ivan Nikolishin against the Portland Winterhawks.