SELECT-A-SEAT MONTH IS HERE | CLICK HERE FOR DETAILS & LOCK IN THOSE SEATS YOU HAVE ALWAYS BEEN LOOKING FOR!
September 23, 2016 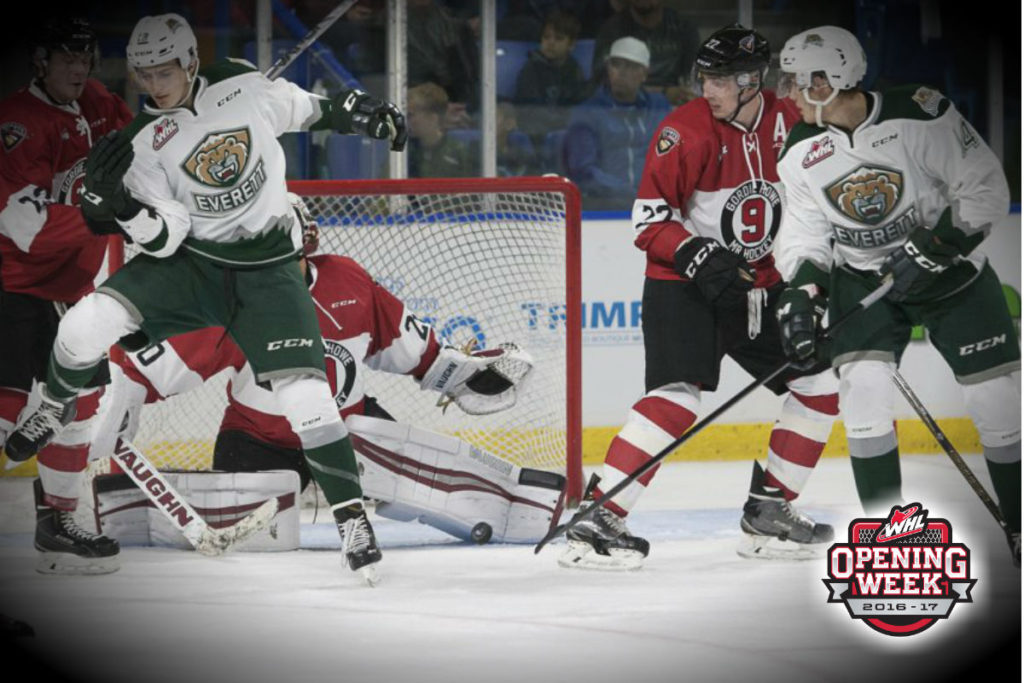 EVERETT, Wash. – Devon Skoleski and Graham Millar each scored two goals and the Everett Silvertips used a five-goal first period to rout the Vancouver Giants in a 7-3 victory before a sellout crowd of 4,875 at Langley Events Centre on Friday, the opener of the 2016-17 WHL season.

Before a nationally televised crowd, the Silvertips posted their largest margin of victory in a season opening win since an 8-3 win over Prince George on Sept. 21, 2013. Their five goals were most in one period since Sept. 28, 2014 (6-4 win vs. Portland) and the Silvertips, in the absence of Carter Hart, Noah Juulsen and Eetu Tuulola, had 11 players earn at least a point in the win.

The Silvertips went to work quickly on their first power play, using a Bryce Kindopp rebound goal (first in his WHL career) to go up 1-0 at 2:59 of the first period. After Petit flashed his left pad to stop a chance by Jack Flaman, Millar’s first goal of the night extended the lead to 2-0 on a nifty dish by Bajkov to the front of the net, off the rush at 8:28.

Skoleski hammered a one-timer at the right circle for a 3-0 lead at 9:35 on the Tips second power play, and Skoleski converted another chance in a similar spot at 11:27, extending the rout to 4-0.

Dawson Holt crashed the net for a rebound goal to put Vancouver on the board at 17:05, but Jake Christiansen restored the Silvertips lead on the next shift with a snipe over Ryan Kubic’s shoulder at 17:42 for a 5-1 cushion.

Holt earned his second goal of the game at 9:35 of the second period, chopping the deficit to 5-2 but Sean Richards responded with a goal in his Tips debut at 17:01, walking out from behind the net and burying a wrister from the right circle.

Millar earned his second goal of the game, a set up at the net by Bajkov again, to bolster the lead to 7-2 with 1:27 left in regulation and Flaman’s goal with 31 seconds left closed the game’s scoring.

The Silvertips have their home opener next against the Giants, Saturday night at 7:05 p.m. (Fox Sports 1380 / WHL Live) at XFINITY Arena. Silvertips season ticket or mini-plan packages are available at www.everettsilvertips.com/season or by calling (425) 252-5100.