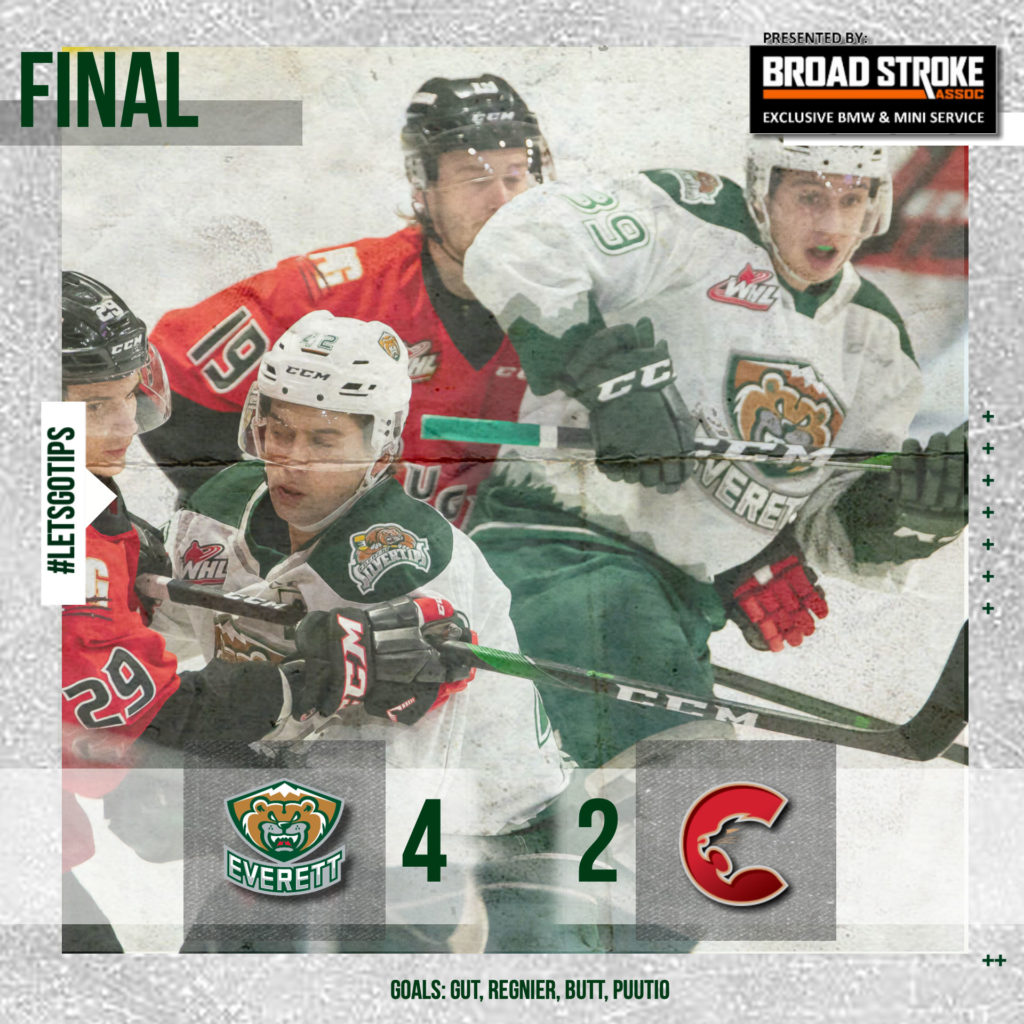 EVERETT, Wash. –  Dawson Butt scored the eventual game winner and Braden Holt made 27 saves as the Everett Silvertips defeated the Prince George Cougars 4-2 in front of 4,973 fans at Angel of the Winds Arena on Friday in WHL action.

UP NEXT: Everett finishes off their five-game homestead with a visit from the Vancouver Giants for Star Wars night on Saturday, February 22nd at 7:05 p.m. (KRKO / WHL Live). In partnership with Make A Wish Alaska and Washington,in the link below, a portion of your ticket ($5) will be donated to Make A Wish.

The first period was even until the 18:03 mark when Michal Gut’s power play goal put Everett ahead 1-0. It was Gut’s 11th goal of the season and his second in as many games. Making his first start since January 4th, also against the Prince George Cougars, Silvertips netminder Braden Holt made fourteen saves in the opening period to give the Silvertips a 1-0 lead after twenty minutes.

It was more of the same in the second period in terms of the pace of play. Everett outshot Prince George 16-10 in the middle frame but it was the Cougars who found the back of the net, thanks to Josh Maser putting home his 23rd of the season past Braden Holt. Thanks to Maser, it was all knotted up at one apiece after forty minutes of play as it was the first time Everett did not have a lead after the second period since February 9th.

Everett came out firing in the third period as Ethan Rginer put home his 11th goal of the season just eight seconds into the period to make it a 2-1 lead, one second shy of tying the Tips franchise record for fastest goal to begin a period.

Five minutes after Reginer’s goal, Cougars forward Vladislav Mikalchuk scored on the power play and it was back even at two. Less than a minute after Mikalchuk’s goal, Dawson Butt scored the game-winning goal off a Gage Goncalves rebound and Everett was in front 3-2. Kasper Puutio would provide the insurance as he scored an empty-net goal with less than two minutes to play as Everett defeated Prince George 4-2.

The first star of the night went to Dawson Butt for scoring the game-winning goal. Butt now has goals in three straight games and has five points in his last four games. Cougars forward Josh Masher earned the second star of the night with a goal and assist. Rounding out the three stars was Silvertips netminder Braden Holt, who finished with 27 saves on 29 shots. In six games played this season, Holt has a record of 2-2 with a 2.46 GAA and .916 save percentage.

GAME NOTES: Scratched from tonight’s game were Hunter Campbell, Gianni Fairbrother, and Aidan Sutter… This was Braden Holt’s first win since he beat Prince George on January 4th… In two homes game against Prince George this season, Dawson Butt has three goals, which is the most against any team.