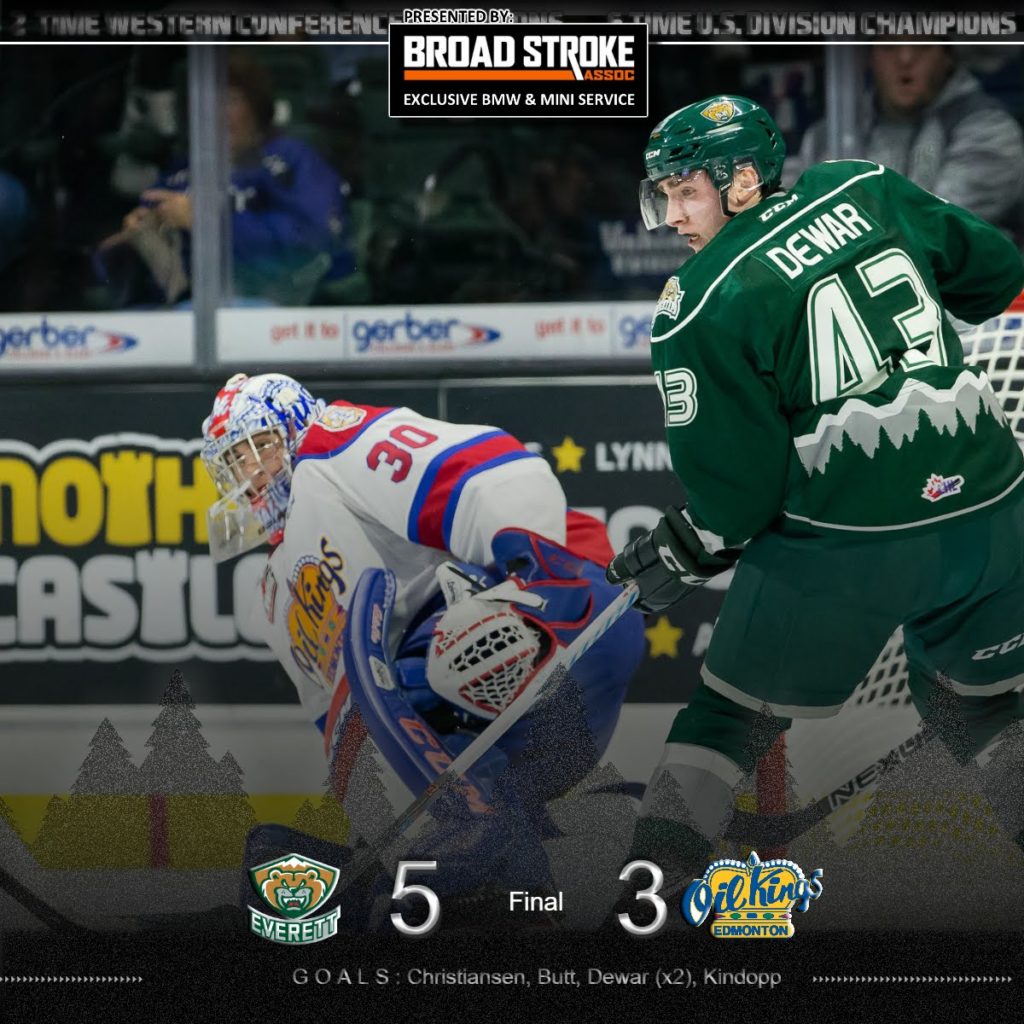 Dustin Wolf stopped 19 shots and the Tips buried two power play goals, including a late tie breaking goal by Bryce Kindopp in the third period to move their all-time record to 6-6-0-0 against Edmonton.

UP NEXT: The Silvertips will close the four game homestand, aiming for three wins in the span in their first matchup of the season against the Kamloops Blazers at 7:05 p.m. on Saturday (1380 AM / 95.3 FM / Tips App / WHL Live). Tickets are on sale at www.everettsilvertips.com/tickets.

Everett made a physical presence as soon as the puck was dropped but the game’s first penalty was awarded to Oil King’s Ethan Cap was hauled off for slashing at 11:08 in the first, which was a short power play for Everett as Silvertips defenseman Wyatte Wylie called for goaltender interference at 11:57 in the first. Christiansen put the Silvertips up 1-0 at 14:51 in the first, after he roofed a forehand shot off a centering pass from Connor Dewar and Bryce Kindopp.

The period concluded with a holding penalty on Edmonton winger Trey Fix-Wolansky at 15:47 as Everett led in shots 11-6 after one.

Oil Kings d-man Conner McDonald started the second with a goal 53 seconds into the second period, assisted by Fix-Wolansky, to tie the game at 1-1.

The Oil Kings offense continued with center Vince Loschiavo fired a shot from between the circles at 9:11 to tie the game, 2-1, off assists from winger Jake Neighbours and Fix-Wolansky. The Silvertips continued to pepper shots on Oil Kings goaltender Boston Bilous, as the Silvertips tallied 35 through two periods, as Edmonton had 13.

Everett forward Dawson Butt tied the game, 2-2, at 14:35 with a wrister at the right circle just as he sped into the offensive zone off a feeder-pass from forward Reece Vitelli. Just over three minutes later, Butt and Edmonton’s Jalen Luypen get sequential roughing penalties at 12:13.

At 15:55 into the second, a Dewar power play goal – a rebound at the net – gave Everett a 3-2 off assists from Riley Sutter and Christiansen.

On a late power play in the third period, Everett forward Bryce Kindopp’s one-timer from the slot at 17:01 gave the Silvertips the lead, 3-2, off passes from Dewar and Ronan Seeley.

Dewar wrapped the game up as he tallied his fourth point of the night, with a goal at 18:19 assisted by Sutter and on Dewar’s blast from the left wing.

The Silvertips piled on 44 shots compared to the Oil Kings 20.