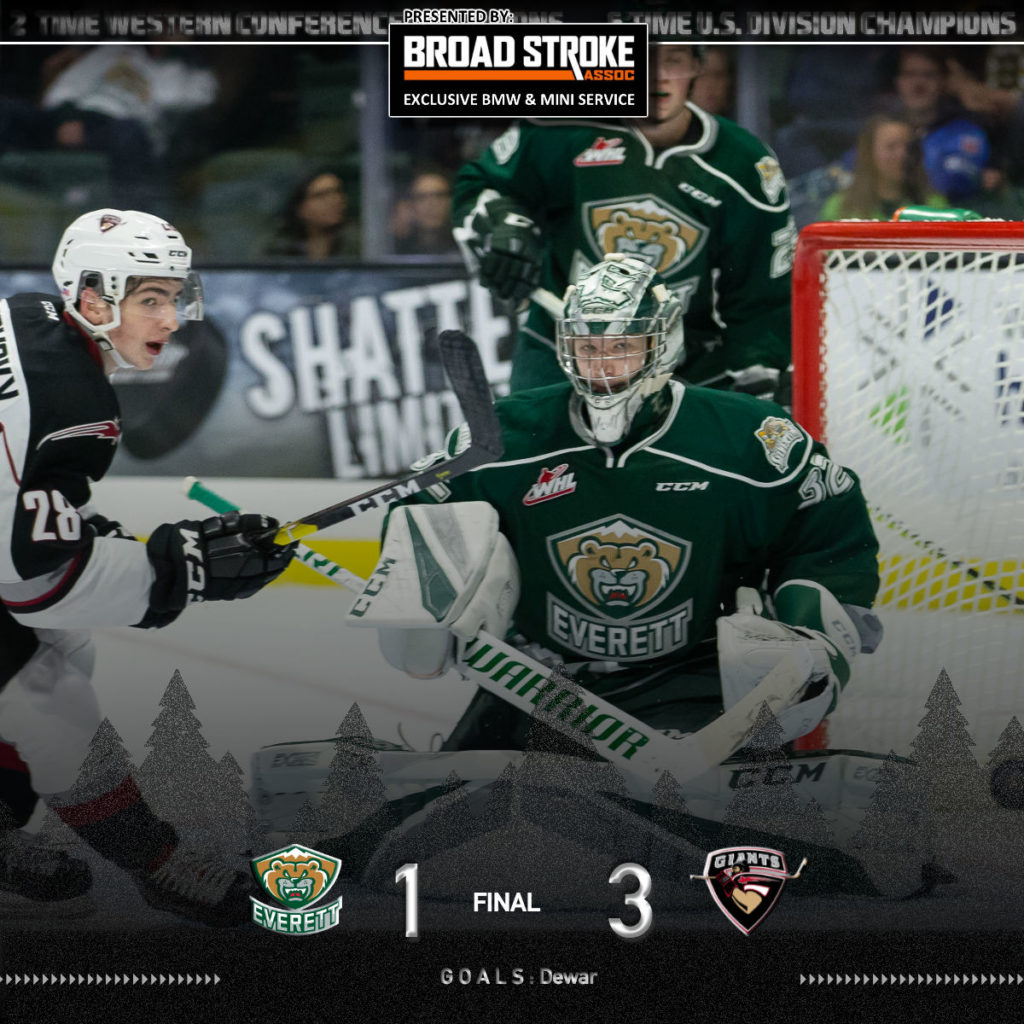 With two banners hoisted to the rafters by members of the returning Silvertips squad, Connor Dewar scored the only Silvertips goal with 1:01 left in the second period. Dustin Wolf made his second consecutive start in net and turned in a 26 save effort. Giants’ right-winger Jared Dmytriw scored the game-winning goal at 10:12 into the third period during a 4-on-4 stint, putting the Giants up 2-1, prior an empty net goal scored at 18:43.

UP NEXT: The Silvertips return to play and seek their first win of the season on Sunday at home, hosting the Portland Winterhawks at 4:05 p.m. (1380 AM / 95.3 FM / Tips App / WHL Live). Sunday offers the first Smile Generation Family Fun Day and BECU Super Saver (ticket discounts available at the doors).

Vancouver center Dawson Holt put the Giants up 1-0 with power play goal at 14:51 in the first. Holt, who was positioned in front of Everett’s crease, poked the bouncing puck past Wolf, with assists from winger Lukas Svejkovsky and blue liner Dylan Plouffe. A physical opening period produced five minor penalties, which included a four-minute high stick call committed by Vancouver’s Kaleb Bulych.

Silvertip captain Connor Dewar tied the game up 1-1 off a deflection at 18:59 in the second. The original wrist shot from the Everett defenseman Wyatte Wylie from the point, came off a pass from Riley Sutter.

Dmytriw scored off a rebound initially stopped by Everett’s Dustin Wolf, but the puck found its way into the back of the net off assists from Plouffe and Alex Kannok-Leipert.

Wolf was pulled for an extra Everett attacker late in the third which led to Vancouver center Justin Sourdif scoring at 18:43 into an empty net for the final goal of the night.

NOTES: Silvertips scratches include Alex Moar, Dawson Butt, Peter Melcher, Luke Ormsby, Reece Vitelli, and Jalen Price … Vancouver led in shots, 28-29 … the Silvertips went 3-of-4 on the penalty kill and have killed 8-of-9 in their first two games … Wylie has assists in his first two games.