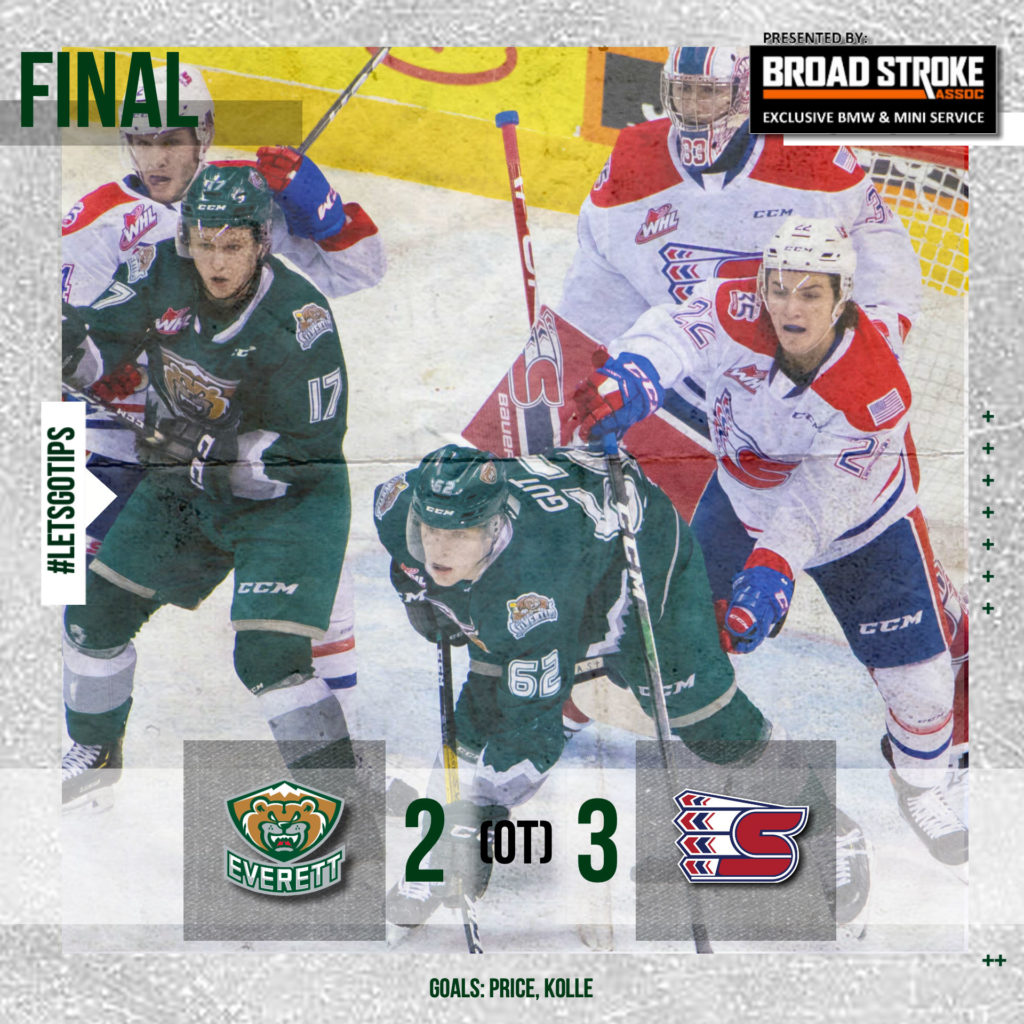 SPOKANE, Wash. – Kicking off back to back road games, the Everett Silvertips travelled to Spokane Arena for a battle with US Division rivals, the Spokane Chiefs. In front of 3,213 people, Eli Zummack and the Chiefs held off the Silvertips, 3-2 in overtime for the first time this season before 3,213 fans at Spokane Arena.

Jalen Price bagged his third goal of the season and Gage Goncalves forced overtime with his 24th goal of the season late in regulation, moving the Tips head to head record 6-0-1-0 this season against the Chiefs. Dustin Wolf posted 26 saves in net.

UP NEXT: The Silvertips continue their three-game trip Wednesday at 7:05 p.m. at Spokane (KRKO / Tips App / WHL Live). The Silvertips return home Sunday, Jan. 26 against the Spokane Chiefs at 4:05 p.m. for Hat Giveaway presented by Buzz Inn Steakhouse.

The Chiefs scored first as New Jersey Devils prospect Ty Smith snuck a wrist shot through traffic 14;53 into the first period. With the goal, Smith reached his last season’s goal total with his seventh of the year. Spokane outshot Everett 10-7 in the first period but it was the second period where things seemed to change.

The Tips and Dustin Wolf also had a shutout streak end on Smith’s goal, at 147:49.

After Adam Beckham scored his WHL leading 34th goal for Spokane at 4:59 of the second period, Everett looked like a different team, playing with more energy and started to take control of the game. It would lead to the Silvertips scoring their first goal of the night, thanks to Jalen Price putting home a loose puck past Lukas Parik just 29 seconds after Beckman’s  goal to cut the deficit to one goal. Through 40 minutes, Everett trailed 2-1 with a critical 20 minutes ahead.

Everett came out with the same energy in the third period as they had in the second. Eventually, they would tie the game thanks to a clutch goal that Goncalves deflected in, setting a screen at the net on Ty Kolle’s blast from the blueline with 2:57 left in regulation.

Each team had their opportunities to score but it was Spokane’s Eli Zummack who scored on the breakaway to give Spokane the 3-2 victory, on a late break to the net and subsequent backhander at 2:07.

Chiefs netminder Lukas Parik got the first star of the night as he made 32 of 34 saves against Everett. Eli Zummack earned the second for getting the game-winning goal, an assist, and going +3. Jalen Price got the third star for his goal and Everett would leave Spokane with a hard-fought point.

NOTES: Scratched from tonight’s game was Dawson Butt, Gianni Fairbrother, and Tyson Phare… With his goal tonight, Jalen Price now has two goals and an assist against Spokane this season… With 34 shots on goal tonight, it marks Everett’s 14th straight game with at least 30 shots on net as December 14th was the last game they didn’t reach the 30 shot mark… the Tips moved to 11-0-2-1 in the last 13 regular season meetings with Spokane.