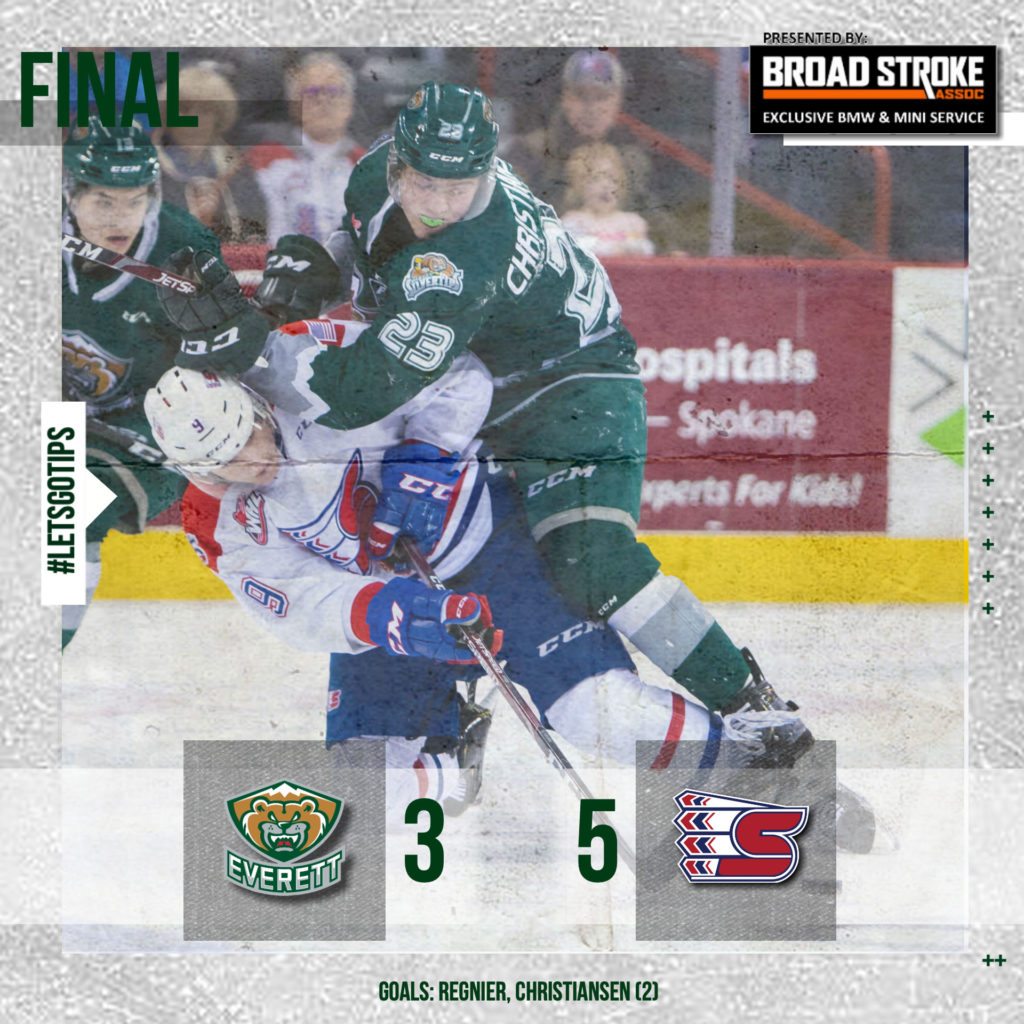 SPOKANE, Wash. –  Leif Mattson scored twice and the Spokane Chiefs used four unanswered goals in the second period to hold off the Everett Silvertips, 5-3 on Sunday before 4,840 fans at Spokane Arena.

The Tips settled for four points in their sixth “three-in-three” scenario, and have reached that benchmark in all six occasions this season. It was their first regulation loss in 17 regular season games against the Chiefs, ending a streak of 13-0-2-1. The Tips finished at 7-1-1 this season against Spokane.

The Tips magic number to clinch a playoff berth was reduced to two points after Seattle defeated Prince George, 2-1 on Sunday.

Jake Christiansen scored twice, extending his career high to 17 goals and is tied with Alex Cotton of Lethbridge for most goals among WHL defensemen, while tying Landon Oslanski’s single season record for most goals scored by a Silvertips defenseman as well.

UP NEXT:  The Tips will return to AOTW Arena on Friday, February 14th when they take on the Seattle Thunderbirds at 7:35 PM. Union Solidarity Night and Valentine’s Day also present Hockey Happy Hour presented by Broad Stroke Associaties, with doors opening at 6pm.

The Tips manufactured a 2-0 lead after one period and got on the board with a strong start, outshooting Spokane 11-9. Ethan Regnier earned his first goal as a Silvertip (and his 10th of the year) at 16:27 when he slammed a rebound from the right circle. Christiansen then sealed up a 4-on-3 goal with 31 seconds left when he finished Gage Goncalves’ cross-ice pass and fired a bullet under the crossbar on Lukas Parik.

Spokane answered by rallying for four unanswered goals to take a 4-2 advantage in the second period. Leif Mattson’s screen on a Filip Kral point shot finished a power play goal at 2:44 and Sward sprung Mattson for a breakaway goal to tie the game at 8:18.

Luke Toporowski’s one-timer from the slot deflected off Dustin Wolf for a 3-2 lead at 9:07, and Adam Beckman finished Jack Finley’s feed off the rush at 15:38 to complete the Spokane run. Christiansen settled the momentum with his second goal of the game and 17th of the year with 2:56 remaining, blasting a one-timer past Parik after Bryce Kindopp dislodged coverage by Ty Smith at the left circle, and fed Christiansen between the circles.

The Tips narrowly missed tying the game in the third period on a Christiansen hat trick bid and a Wyatte Wylie blast from the right circle that deflected off the post, but Spokane sealed up the game on Cordel Larson’s empty netter with 8.1 seconds left.