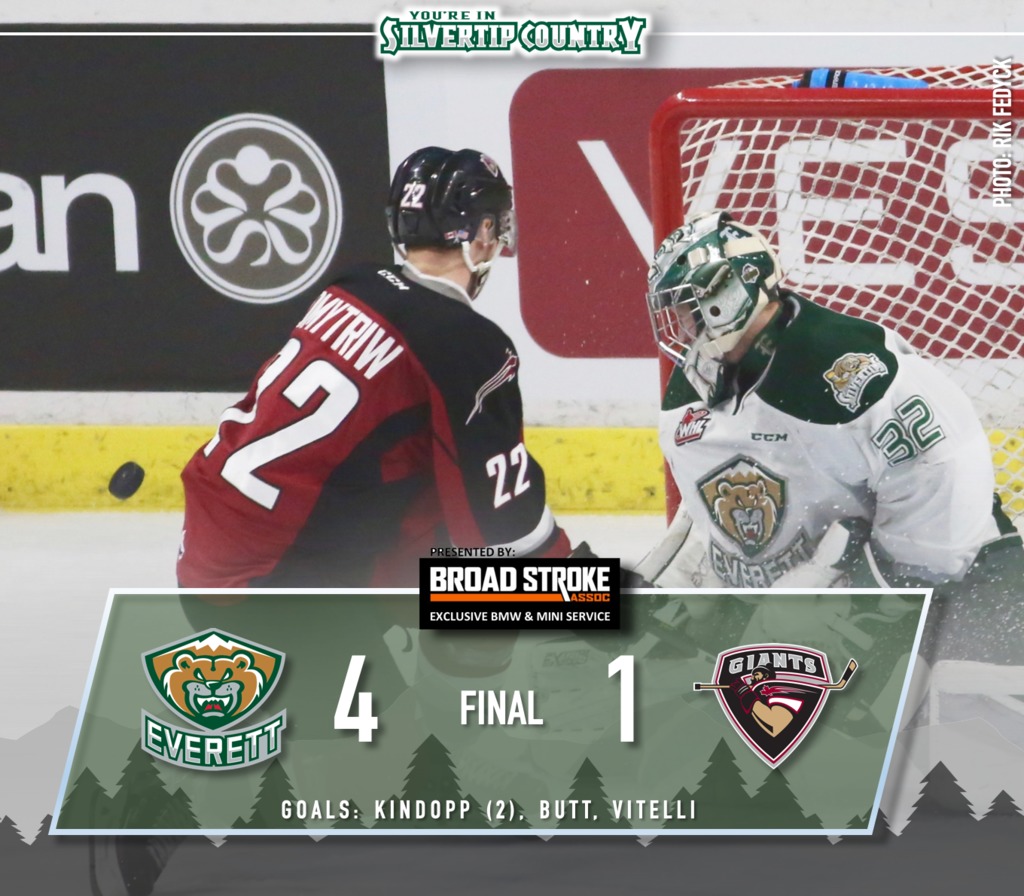 LANGLEY, British Columbia – Bryce Kindopp scored a pair of goals and Dustin Wolf stopped 37 shots as the Everett Silvertips crushed the Vancouver Giants in a 4-1 victory and a battle of two first place teams, before 3,866 fans at Langley Events Centre on Friday night in WHL action.

The Silvertips, earning their 10th win in 11 games, ruptured a scoreless game in the second period with a four-goal rally in a span of 6:47. Dawson Butt and Reece Vitelli also collected goals, and the Tips finished with a split of the four-game series with Vancouver.

UP NEXT: The Silvertips return home for Teddy Bear Toss on Saturday, Dec. 15 against the Seattle Thunderbirds at 7:05 p.m. (1380 AM / 95.3 FM / Tips App / WHL Live) in downtown Everett. Tickets remain on sale at www.everettsilvertips.com/teddybeartoss. Dave Tippett, Senior Hockey Advisor of NHL Seattle (representing the NHL’s expansion franchise for 2021-22), will participate in the pre-game ceremonial puck drop.

After a scoreless first period and a brisk pace between two of the CHL’s top-10 ranked clubs, the Tips broke through on Kindopp’s shorthanded breakaway goal at 10:36 for his 14th goal of the season, a snapper past Trent Miner’s blocker.

Butt earned his sixth goal of the season, a snap shot from the right circle, set up by Max Patterson for a 2-0 lead at 12:50 and Reece Vitelli followed by bursting behind the Vancouver defense and sneaking his fourth goal through Miner’s five hole for a 3-0 lead with 3:28 to play.

Kindopp cleaned up a rebound at the left post on a two-on-one with Conrad Mitchell, chasing Miner from the game on 23 shots and a 4-0 lead with 2:37 left in the period.

David Tendeck, forced into action, made four saves on four shots as the Silvertips wore the clock in the third period. Owen Hardy buried a wrister off the rush to spoil Wolf’s shutout bid with 2:16 left in regulation, but the Tips closed out the Giants on Wolf’s 12 saves in the third period.

NOTES: Silvertips scratches included Jalen Price, Sean Richards and Bronson Sharp… the Tips held Vancouver to 0-of-5 on the power play and 3-of-20 in the season series … Kindopp earned the 21st multi point game of his career … Patterson collected his fourth point in five games since joining the Silvertips … Wolf went 2-2 against Vancouver this season, playing in every minute of the head-to-head series.